A small infectious agent that is unable to replicate outside a living animal cell. Unlike other intracellular obligatory parasites (for example, chlamydiae and rickettsiae), they contain only one kind of nucleic acid, either deoxyribonucleic acid (DNA) or ribonucleic acid (RNA). They do not replicate by binary fission. Instead, they divert the host cell's metabolism into synthesizing viral building blocks, which then self-assemble into new virus particles that are released into the environment. During the process of this synthesis, viruses utilize cellular metabolic energy, many cellular enzymes, and organelles which they themselves are unable to produce. Animal viruses are not susceptible to the action of antibiotics. The extracellular virus particle is called a virion, while the name virus is reserved for various phases of the intracellular development. See Ribonucleic acid (RNA)

Virions are small, 20–300 nanometers in diameter, and pass through filters which retain most bacteria. However, large virions (for example, vaccinia, which is 300 nm in diameter) exceed in size some of the smaller bacteria. The major structural components of the virion are proteins and nucleic acid, but some virions also possess a lipid-containing membranous envelope. The protein molecules are arranged in a symmetrical shell, the capsid, around the DNA or RNA. The shell and the nucleic acid constitute the nucleocapsid.

In electron micrographs of low resolution, virions appear to possess two basic shapes: spherical and cylindrical. High-resolution electron microscopy and x-ray diffraction studies of crystallized virions reveal that the “spherical” viruses are in fact polyhedral in their morphology, while the “cylindrical” virions display helical symmetry. The polyhedron most commonly encountered in virion structures is the icosahedron, in which the protein molecules are arranged on the surface of 20 equilateral triangles. Based on these morphological features, viruses are classified as helical or icosahedral. Certain groups of viruses do not exhibit any discernible features of symmetry and are classified as complex virions. Further distinction is made between virions containing RNA or DNA as their genomes and between those with naked or enveloped nucleocapsids.

The outer protein shell of the virion furnishes protection to the most important component, the viral genome, shielding it from destructive enzymes (ribonucleases or deoxyribonucleases). The viral genome carries information which specifies all viral structural and functional components required for the initiation and establishment of the infectious cycle and for the generation of new virions. This information may be contained in a double-stranded or single-stranded (parvoviruses) DNA, or double-stranded (reoviruses) or single-stranded RNA. The viral DNA may be linear or circular, and the viral RNA may be a single long chain or a number of shorter chains (fragmented genomes), each of which contains different genetic information. Furthermore, some RNA viruses have the genetic information expressed as a complementary nucleotide sequence. These are classified as negative-strand RNA viruses. Finally, the RNA tumor viruses have an intracellular DNA phase, during which the genetic information contained in the virion RNA is transcribed into a DNA and integrated into the host cell's genome. The discovery of this process came as a surprise, since it was believed that the flow of genetic information was unidirectional from DNA to RNA to protein and could not take place in the opposite direction. The transcription of RNA to DNA was termed reverse transcription, and the RNA tumor viruses are sometimes referred to as retroviruses. See Genetic code

When introduced into a susceptible cell by either chemical or mechanical means, the naked viral nucleic acid is in most cases itself infectious. Two exceptions are the negative-strand RNA viruses and the RNA tumor viruses. In these cases the RNA has to be first transcribed and reverse-transcribed, respectively, into the proper form of genetic information before the infectious process can take place. This task is carried out by means of an enzyme which is contained in the protein shell of the virion nucleocapsid. The whole nucleocapsid is therefore required for infectivity.

Viral infection is composed of several steps: adsorption, penetration, uncoating and eclipse, and maturation and release. Adsorption takes place on specific receptors in the membrane of an animal cell. The presence or absence of these receptors determines the tissue or species susceptibility to infection by a virus. Enveloped viruses exhibit surface spikes which are involved in adsorption; however, most animal viruses do not possess obvious attachment structures. Penetration takes place through invagination and ingestion of the virion by the cell membrane (phagocytosis or viropexis). Penetration is followed by uncoating of the nucleic acid, or in some cases by uncoating of the nucleocapsid. At this stage, the identity of the virion has disappeared, and viral infectivity cannot be recovered from disrupted cells. See Phagocytosis

The absence of infectious particles in cell extracts is characteristic of the eclipse period. During the eclipse the biochemical processes of the cell are manipulated to synthesize viral proteins and nucleic acids. The eclipse period in infections with DNA viruses starts with the transcription of the genetic information in the nucleus of the cell (except poxviruses), processing into mRNAs, and their translation into proteins (in the cytoplasm). This process is divided into early and late transcription. The early proteins are virus-encoded functional proteins which will participate in the synthesis of viral DNA and of intermediate and late viral proteins, as well as in the shutoff of various cellular functions which might be detrimental to viral synthesis. The major late products are the structural proteins of the nucleocapsid. Almost as soon as these proteins are synthesized, they assemble with newly synthesized DNA molecules into virion nucleocapsids.

The events of the eclipse period in infections with RNA viruses are similar, except that they take place in the cytoplasm (influenza virus excepted), and a division into early and late transcription cannot be made. In the case of positive-strand RNA viruses, the viral RNA is itself the mRNA. In infections with negative-strand RNA viruses, the virion RNA in the nucleocapsid is first transcribed into positive mRNAs. Intracellular nucleocapsids are present throughout the entire infectious cycle, and the eclipse period cannot be defined in the classical sense. RNA tumor viruses reverse-transcribe their RNA into DNA, which enters the cell nucleus and becomes integrated into the cellular DNA. All viral mRNAs and genomic RNAs are generated by transcription of the integrated DNA.

The event characteristic of the maturation step is virion assembly and release. In many cases the protein shell is assembled first (procapsid) and the nucleic acid is inserted into it. During this insertion, processing of some shell proteins by cleavage takes place and is accompanied by a modification of the structure to accommodate the nucleic acid. Unenveloped viruses which mature in the cytoplasm (for example, poliovirus) often exit the cell rapidly by a reverse-phagocytosis process, even before the breakdown of the cell. In some cases, however, a large number of virus particles may accumulate inside the cell in crystalline arrays called inclusion bodies. Viruses that mature in the nucleus are usually released slowly, and the damage to the cell is extensive. Enveloped viruses exit the cell by a process of budding. Viral envelope proteins (glycoproteins) become inserted at various sites into the cell membrane, where they also interact with matrix proteins and with nucleocapsids. The cellular membrane then curves around the complex and forms a bud which detaches from the rest of the cell (see illustration). 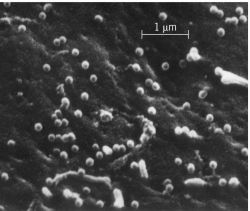 Two extreme types of effects are identified with viral infections: lytic infections, which cause cell death by a variety of mechanisms with cell lysis as the most common outcome, and persistent infections, accompanied either by no apparent change in the host cell or by some interference with normal growth control, as in transformation of normal to cancer cells. In animals, extensive destruction of tissue may accompany an infection by a lytic virus. See Lytic infection

As a defense to certain conditions of infection, animal cells generate a group of substances called interferons which, by a complex mechanism, inhibit replication of viruses. They are specific to the cell species from which they were derived but not to the virus which elicited their generation. (Mouse interferon will protect mouse but not human cells from any viral infection.)

Virus infections spread in several ways: through aerosols and dust, by direct contact with carriers or their excretions, and by bites or stings of animal and insect vectors. At the point of entry, infected cells undergo viremia. From there, the virus becomes disseminated by secretions. It is carried through the lymphatic system and bloodstream to other target organs, where secondary viremias occur (except in localized infections like warts). In most cases viral infections are of short duration and great severity. However, persistent infections are not uncommon (herpes, adeno, various paramyxoviruses like measles).

The afflicted organism mounts a variety of defenses, the most important of which is the immune response. Circulating antibodies against viral proteins are generated. Those interacting with virion surface proteins neutralize the infectious potential of the virus. Although the antibodies are specific against the virus which has elicited them, they will cross-react with closely related virus strains. The specificity of neutralizing antibodies obtained from experimentally injected animals is utilized for diagnostic purposes or in quantitative assays. In addition to the circulating antibodies, cell-mediated immune responses also take place. The most important of these is the production of cytotoxic thymus-derived lymphocytes, found in the lymph nodes, spleen, and blood. They destroy all cells which harbor in their membrane viral glycoproteins. The cell-mediated immunity has been demonstrated to be more important to the process of recovery than circulating antibodies. In spite of their beneficial role, immune responses often seriously contribute to the pathology of the disease. Circulating antigen-antibody complexes can lodge in organs and cause inflammation; cell-mediated responses have been known to produce severe shock syndromes in patients with a history of previous exposures to the virus. See Antibody, Autoimmunity

Viruses are resistant to the antibiotics commonly used against bacterial infections. The use of chemotherapeutic agents with antiviral activity is plagued by their toxicity to the animal host. However, the application of vaccines has been successful in the control of several viruses. The vaccines elicit immune responses and provide sometimes life‒long protection. Two types of vaccines have been applied: inactivated virus and live attentuated virus. Various inactivation procedures are available. An attentuated laboratory strain of smallpox has been applied so successfully that the disease is considered to be eradicated. A small probability of back mutations of the attenuated virus to a virulent strain makes applications of live vaccines somewhat riskier. On the other hand, protection is longer-lasting and, by virtue of spread to nonvaccinated individuals, more beneficial to the population group (herd effect). See Poliomyelitis, Vaccination

In order to achieve full protection, it is important that the vaccine contain all the distinct antigenic types of the virus. Development of monoclonal antibodies led to a better characterization of these types in naturally occurring viruses. This information will undoubtedly lead to better vaccines. Moreover, monoclonal antibodies have aided investigations into the molecular structure of viral antigenic groups and brightened future prospects for synthetic vaccines. See Monoclonal antibodies, Virus, Virus classification