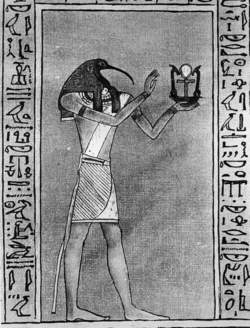 Also known as the crux ansata, the ankh is a tau cross with a loop above it. It seems likely that the loop represents the female sexual organ and the tau cross the male. For this reason the ankh is considered a symbol of life, fertility and regeneration. DeTraci Regula suggested that it is derived from an African fetish doll of the type used to promote fertility. Count Goblet d'Alviella suggested that it derived from primitive Phoenician and Libyan images of the Goddess, as a narrow triangle surmounted by crossbars plus an oval head.

The ancient Egyptian word ankh means both "life" and "hand mirror." In Egyptian art, the ankh is carried by virtually every deity, symbolizing the gift of eternal life which they promised to their worshipers. The loop was frequently painted red and the cross white. There are many scenes of the ankh being applied to the nostrils of the dead, to bring them back to life.

The ankh is a common talisman, for protection and for fertility, and is worn by many Wiccans.

The Church of Wicca, based in a Welsh-Celtic tradition founded by Gavin and Yvonne Frost, uses—perhaps surprisingly, considering their background—an ankh as one of their working tools. They have both a standard ankh, for individual use, and a grand ankh, for coven use. Each is made of wood, usually willow fronds. The tool is used much as other traditions use the coven sword. The standard ankh is measured from the inside of the loop at the top to the base, and should be 2 feet, 8 1/2 inches. This is described by the Frosts as "one megalithic yard." The coven ankh is two megalithic yards or 5 feet, 5 inches.

There are some Wiccan traditions that are based on ancient Egyptian beliefs and teachings, which use the ankh in various ways. Most common, however, is as jewelry and/or talismans.

Feedback
Flashcards & Bookmarks ?
Please log in or register to use Flashcards and Bookmarks. You can also log in with
Flashcards ?
My bookmarks ?
+ Add current page to bookmarks
TheFreeDictionary presents:
Write what you mean clearly and correctly.
Mentioned in ?
References in periodicals archive ?
According to social media and YouTube data, the Gujarati song 'Tari Ankh no Afini' is immensely popular.
Surati singer JagdishItaliya touches musical milestone, garners over 50 lakh views on YouTube
A priest was contacted and he concluded Freya had been possessed by "Hathor", an Egyptian deity, and he took the golden ankh and put it in the church safe.
TALES FROM THE PAST
A recording was produced from that session called "the ark and the ankh" in which the two men discuss the similarities of music and poetry, the direction of humanity, and rap about some of sun ra's philosophical equations.
Black Death: The Long Riotous 60's, Henry Dumas, and Resurrection
The ANKH gene and familial calcium pyrophosphate dihydrate deposition disease.
Calcium pyrophosphate dihydrate deposition disease in young patients: two case reports
(3) Numerous cases of CPPD have shown familial links in the ANKH gene, which functions to upregulate protein.
Calcium pyrophosphate deposition disease in the ankle joint: a case report
" Ninety per cent people are convinced that the ghazal, ' Na kisi ki ankh ka noor hoon, na kisi ke dil ka qarar hoon, Jo kisi ke kaam na aa sakey main woh ek musht- eghubar hoon' was by Bahadur Shah Zafar.
Music & Lyrics by Gulzar and Akhtar
As the ladies try to keep Princess Lurelia safe and discover who could have taken the letter, the Ankh, Mina's arch-nemesis, makes itself known.
Gleason, Colleen. The Chess Queen Enigma: Stoker and Holmes, Book 3
Address : 35 Toot Ankh Amoun St., Somouha, Alexandria
Rental of 28 passengers (minibus) vehicles for the students' transportation (to cover both Somouha & Ebis Areas)
Last year, his show was called "Ramez Ankh Amoun," and his most talked-about prank was played on Lebanese diva Haifa Wehbe.
Celeb prankster Ramez Galal returns for another round of pranks this Ramadan
Some symbols such as the Coptic cross, which was a development on the pagan Egyptian ankh symbol, showed the integration of pagan culture into the faith without compromising on the message.
The Art of Faith: A Guide to Understanding Christian Images
Yesterday, my favorite antiquarian bookdealer (Buddenbrooks) sent me its latest catalog featuring a two-volume set by Howard Carter, titled The Tomb of Tut Ankh Amen.
XP: end of days
nothing but a thing, kiss the ankh tattoo on her neck & go back to
We Modern