in tradition, mother of the Virgin and wife of St. Joachim. She is not mentioned in Scripture, but her cult is very old. In the West she has been especially popular since the Middle Ages. She is patroness of Quebec prov., and Ste Anne de Beaupré is one of the most visited of New World shrines. Brittany, also under her patronage, has the renowned shrine of Ste Anne d'Auray, with its annual pilgrimage. St. Anne is invoked by women in childbirth. In art, she is usually an elderly veiled woman and often appears teaching her daughter to read. Her name also appears as Anna. Feast: July 26.
The Columbia Electronic Encyclopedia™ Copyright © 2013, Columbia University Press. Licensed from Columbia University Press. All rights reserved. www.cc.columbia.edu/cu/cup/ 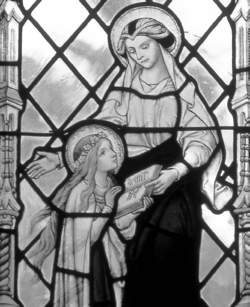 The mother of the Virgin Mary, Saint Anne, is associated with a number of miracles, including healing miracles emanating from her image.Fortean Picture Library.

Saint Anne, the mother of the Virgin Mary, has had a secondary but important position in Western Christian thought and practice, especially since the declaration of the dogma of the Immaculate Conception (the idea that Mary was born without original sin) by Pope Pius IX in 1854. Among the first recognitions of devotion to Saint Anne is found in the church built for her by the Byzantine Emperor Justinian (d. 565). Her feast day (July 25 th) recalls the dedication of the church as well as the reputed arrival of her relics in Constantinople in 710. Veneration of Saint Anne in the West was concentrated in France, although some of her relics made their way to Austria.

Among the churches dedicated to Saint Anne is Sainte-Anne-d’Auray in Morbihan, France. This seventeenth-century church originated in a vision of the Virgin Mary in 1623 to Yves Nicolazic, who was told to rebuild a chapel dedicated to Saint Anne that had reputedly existed at Auray from the fifth to the seventh century. As land was being cleared for the building, an old statue of Saint Anne was discovered. The coincidence of the apparition and the discovery of the statue quickly attracted pilgrims, and as word reached the ears of more pious rulers, they offered support. Most notably, Anne of Austria and Louis XIII of France presented a relic of Saint Anne to the new chapel.

The chapel at Auray suffered greatly during the French Revolution, when it was plundered and burned (although the statue survived). A new, large church adjacent to the chapel was constructed at the end of the 1860s. It is the site of an annual festival on July 25–26.

A second miraculous statue of Saint Anne was pulled from the sea by fishermen and now resides in the church of Sainte-Anne-de-la-Palue, also in Brittany. While carrying the statue to what would have been the nearest church, the men reached a spot where Saint Anne had requested the erection of a new church. The statue was said at this point to have become so heavy the men could not further move it.

French sailors took their veneration of Saint Anne to Quebec in the mid-seventeenth century. They built a chapel to her on the shore of the St. Lawrence River, where they had found safety in a storm. A healing miracle that occurred in 1658 while a second expanded chapel was being built set the church apart as a focus for divine healing. The church was rebuilt and expanded a number of times in the intervening years, and today the church of Sainte-Anne-de-Beaupré is part of a large complex of Catholic facilities that includes a hospital, monastery, and convent. It has become a favorite site among Native Americans and Canadians. In 1892, Pope Leo XIII sent a relic of Saint Anne to the shrine, and Pope John XXIII sent another in 1960.