Anthony, Susan Brownell, 1820–1906, American reformer and leader of the woman-suffrage movement, b. Adams, Mass.; daughter of Daniel Anthony, Quaker abolitionist. From the age of 17, when she was a teacher in rural New York state, she agitated for equal pay for women teachers, for coeducation, and for college training for girls. When the Sons of Temperance refused to admit women into their movement, she organized the first woman's temperance association, the Daughters of Temperance.

At a temperance meeting in 1851 she met Elizabeth Cady Stanton, and from that time until Stanton's death in 1902 they were associated as the leaders of the woman's movement in the United States and were bound by a warm personal friendship. Susan B. Anthony lectured (1851–60) on women's rights and on abolition, and, with Stanton, secured the first laws in the New York state legislature guaranteeing to women rights over their children and control of property and wages. In 1863 she was a coorganizer of the Women's Loyal League to support Lincoln's government, especially his emancipation policy. After the Civil War she opposed granting suffrage to freedmen without also giving it to women, and many woman-suffrage sympathizers broke with her on this issue.

From 1869 she traveled and lectured throughout the United States and Europe, seeing the feminist movement gradually advance to respectability and political importance. The secret of her power, aside from her superior intellect and strong personality, was her unswerving singleness of purpose. With Elizabeth Cady Stanton and Matilda Joslyn Gage, she compiled Volumes I–III of the History of Woman Suffrage (1881–86), using a personal legacy to buy most of the first edition and present the volumes to colleges and universities in the United States and Europe. The History was completed by Ida Husted Harper (Vol. IV–VI, 1900–1922; Anthony contributed to Vol. IV). 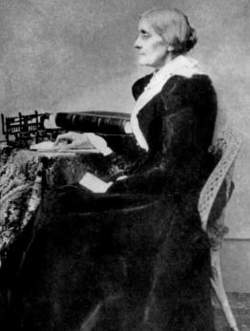 Anthony spent fifteen years teaching before becoming active in temperance. Her family had a long activist tradition that gave her a sense of justice and moral fervor. In 1845 the family moved to Rochester, New York. There they became very active in the anti-slavery movement, with like-minded Quakers meeting at their home on a weekly basis. The year after moving to Rochester, she was appointed head of the girls’ department at Canajoharie Academy and taught there for two years, earning $110 per year. While at the academy, she joined the Daughters of Temperance and campaigned for stronger liquor laws.

As a woman, she was not allowed to speak at temperance rallies; a situation that led her, in 1852, to join the women’s rights movement. She was encouraged in this by one of the leaders of the women’s rights movement, Elizabeth Cady Stanton. Anthony was introduced to Stanton by Amelia Bloomer. In 1853 Anthony asked, at the state teachers’ convention, for women to have a voice at the convention, to take committee positions, and to receive better pay. In 1856 Anthony became an agent for the American Anti-Slavery Society. Despite verbal and physical abuse, she made speeches, organized rallies, placed posters, and distributed leaflets. She became well enough known that she was hung in effigy and, in Syracuse, her image was dragged through the streets.

In 1863, together with Elizabeth Stanton, Anthony organized a Women’s National Loyal League to petition for the abolition of slavery. Five years later she encouraged New York women in the sewing and printing trades to form their own union. In 1868, with Stanton, in Rochester, she started a newspaper titled The Revolution. In 1870 she formed, and became President of, the Workingwomen’s Central Association, which kept reports on working conditions and provided advancement opportunities for women.

It was in 1891 that Anthony first appeared at Lily Dale, the New York Spiritualist community. The Post Journal of Jamestown, New York, reported “Susan B. Anthony, with Elizabeth Cady Stanton, decided to visit Chautauqua Institution in the interest of the founding of the National Women’s Suffrage Institution. Upon their arrival in Chautauqua, the (antagonistic) feeling was so great that it was decided that no meeting could be held there. As a result, the ladies came over the hills to Lily Dale where they held their meeting.” Anthony herself recorded the event: “People came from far and near. Finally three thousand were assembled in that beautiful amphitheater, decorated with yellow, the suffrage color, and the red, white, and blue. There hanging by itself, was our national flag ten by fourteen feet, with its red and white stripes, and in the center of the blue corner just one golden star, Wyoming, blazing out alone. [Wyoming was the first U.S. state to recognize women’s suffrage.] Every cottage in the camp was festooned with yellow, and when at night the Chinese lanterns were lighted on the plazas, it was as gorgeous as any Fourth of July celebration, and all in honor of Woman’s Day and her coming freedom.”

Susan B. Anthony continued to spend time at Lily Dale for a number of years after that initial visit. She was not herself a Spiritualist but in her later years she did visit a medium at Lily Dale. She received a message from her aunt. Anthony’s reported response was “I didn’t like her when she was alive, and I don’t want to hear from her now. Why don’t you bring someone interesting like Elizabeth Cady?”

Women got the vote with the Nineteenth Amendment to the Constitution in 1920. This became known as the Susan B. Anthony Amendment. Anthony didn’t live to see it—she died at her home in Rochester, New York on March 13, 1906.