Protozoa, formerly, the name of an animal phylum comprising a large, diverse assortment of microscopic or near-microscopic one-celled heterotrophic organisms (protozoans). The term “protozoan” (or the collective plural “protozoa”) continues to be used informally; the organisms are now more commonly placed in any of five phyla in the kingdom Protista.
The Columbia Electronic Encyclopedia™ Copyright © 2022, Columbia University Press. Licensed from Columbia University Press. All rights reserved.

A group of eukaryotic microorganisms traditionally classified in the animal kingdom. Although the name signifies primitive animals, some Protozoa (phytoflagellates and slime molds) show enough plantlike characteristics to justify claims that they are plants.

Protozoa are almost as widely distributed as bacteria. Free-living types occur in soil, wet sand, and in fresh, brackish, and salt waters. Protozoa of the soil and sand live in films of moisture on the particles. Habitats of endoparasites vary. Some are intracellular, such as malarial parasites in vertebrates, which are typical Coccidia in most of the cycle. Other parasites, such as Entamoeba histolytica, invade tissues but not individual cells. Most trypanosomes live in the blood plasma of vertebrate hosts. Many other parasites live in the lumen of the digestive tract or sometimes in coelomic cavities of invertebrates, as do certain gregarines.

Many Protozoa are uninucleate, others are binucleate or multinucleate, and the number of nuclei also may vary at different stages in a life cycle. Protozoa range in size from 1 to 106 micrometers. Colonies are known in flagellates, ciliates, and Sarcodina. Although marked differentiation of the reproductive and somatic zooids characterizes certain colonies, such as Volvox, Protozoa have not developed tissues and organs.

A protozoan may be a plastic organism (ameboid type), but changes in form are often restricted by the pellicle. A protective layer is often secreted outside the pellicle, although the pellicle itself may be strengthened by incorporation of minerals. Secreted coverings may fit closely, for example, the cellulose-containing theca of Phytomonadida and Dinoflagellida, analogous to the cell wall in higher plants. The dinoflagellate theca (Fig. 1a) may be composed of plates arranged in a specific pattern. Tests, as seen in Rhizopodea (Arcellinida, Gromiida, Foraminiferida), may be composed mostly of inorganic material, although organic (chitinous) tests occur in certain species. Siliceous skeletons, often elaborate, characterize the Radiolaria (Figs. 1d and 2c). A vase-shaped lorica, from which the anterior part of the organism or its appendages may be extended, occurs in certain flagellates (Fig. 1b) and ciliates (Fig. 1c). Certain marine ciliates (Tintinnida) are actively swimming loricate forms.

Flagella occur in active stages of Mastigophora and flagellated stages of certain Sarcodina and Sporozoa. A flagellum consists of a sheath enclosing a matrix in which an axoneme extends from the cytoplasm to the flagellar tip. In certain groups the sheath shows lateral fibrils (mastigonemes) which increase the surface area and also may modify direction of the thrust effecting locomotion. Although typically shorter than flagella, cilia are similar in structure. See Cilia and flagella

Two major types of pseudopodia have been described, the contraction-hydraulic and the two-way flow types. The first are lobopodia with rounded tips and ectoplasm denser than endoplasm. The larger ones commonly contain granular endoplasm and clear ectoplasm. Two-way flow pseudopodia include reticulopodia of Foraminiferida and related types, filoreticulopodia of Radiolaria, and axopodia of certain Heliozoia. 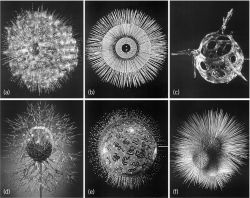 In addition to nuclei, food vacuoles (gastrioles) in phagotrophs, chromatophores and stigma in many phytoflagellates, water-elimination vesicles in many Protozoa, and sometimes other organelles, the cytoplasm may contain mitochondria, Golgi material, pinocytotic vacuoles, stored food materials, endoplasmic reticulum, and sometimes pigments of various kinds.

In protozoan feeding, either phagotrophic (holozoic) or saprozoic (osmotrophic) methods predominate in particular species. In addition, chlorophyll-bearing flagellates profit from photosynthesis; in fact, certain species have not been grown in darkness and may be obligate phototrophs.

Phagotrophic ingestion of food, followed by digestion in vacuoles, is characteristic of Sarcodina, ciliates, and many flagellates. Digestion follows synthesis of appropriate enzymes and their transportation to the food vacuole. Details of ingestion vary. Formation of food cups, or gulletlike invaginations to enclose prey, is common in more or less ameboid organisms, such as various Sarcodina, many flagellates, and at least a few Sporozoa. Entrapment in a sticky reticulopodial net occurs in Foraminiferida and certain other Sarcodina. A persistent cytostome and gullet are involved in phagotrophic ciliates and a few flagellates. Many ciliates have buccal organelles (membranes, membranelies, and closely set rows of cilia) arranged to drive particles to the cytostome. Particles pass through the cytostome into the cytopharynx (gullet), at the base of which food vacuoles (gastrioles) are formed. Digestion occurs in such vacuoles.

By definition saprozoic feeding involves passage of dissolved foods through the cortex. It is uncertain to what extent diffusion is responsible, but enzymatic activities presumably are involved in uptake of various simple sugars, acetate and butyrate. In addition, external factors, for example, the pH of the medium, may strongly influence uptake of fatty acids and phosphates.

Reproduction occurs after a period of growth which ranges, in different species, from less than half a day to several months (certain Foraminiferida). General methods include binary fission, budding, plasmotomy, and schizogony. Fission, involving nuclear division and replication of organelles, yields two organisms similar in size. Budding produces two organisms, one smaller than the other. In plasmotomy, a multinucleate organism divides into several, each containing a number of nuclei. Schizogony, characteristic of Sporozoa, follows repeated nuclear division, yielding many uninucleate buds.

Parasites occur in all major groups. Sporozoa are exclusively parasitic, as are some flagellate orders (Trichomonadida, Hypermastigida, and Oxymonadida), the Opalinata, Piroplasmea, and several ciliate orders (Apostomatida, Astomatida, and Entodiniomorphida). Various other groups contain both parasitic and free-living types. Protozoa also serve as hosts of other protozoa, certain bacteria, fungi, and algae.

a phylum of eucaryotic unicellular organisms. Protozoans differ from all other eucaryotes classified as multicellular organisms in that they consist of a single cell, that is, their highest level of organization is cellular.

Almost all protozoans are microscopic, but they differ from one another in their degree of morphological and physiological differentiation. For example, amebas have a comparatively simple organization, without differentiated organoids for food procurement, locomotion, or contraction. Infusorians, however, have a complex organization: they have surface pellicular structures, support and contractile fibrils, organoids for locomotion (cilia and their derivatives), and special organoids for grasping food and for defense. All protozoans possess a typical cellular structure and complex of general-purpose organoids: mitochondria, an endoplasmatic network, Golgi apparatus, ri-bosomes, and lysosomes. The nucleus is surrounded by a typical double membrane with pores and contains karyoplasm (nucleoplasm), chromosomes (usually despiralized in the inter-kinetic nucleus), and nucleoli.

There are 25,000 to 30,000 known species of Protozoa. However, the actual number of species is probably much larger, since the organisms have not been thoroughly investigated owing to their microscopic size and to technical difficulties. Hundreds of new species are described every year.

The Protozoa are divided into five classes: Sarcodina, Masti-gophora, Sporozoa, Infusoria, and Cnidosporidia. There are several progressive phylogenetic lines, forming major taxa—Foraminifera, Radiolaria, and Infusoria—in which morphological and physiological differentiation is exceedingly complex. The paths of morphological and physiological progress among the Protozoa differ from those in multicellular organisms. The progressive evolution of protozoans is marked by polymerization of the organoids, a high level of polyploidy, and differentiation of nuclei into those that are generative and those that are vegetative (the micronucleus and macronucleus, respectively, in infusorians). Developmental cycles manifested by the regular alternation of asexual and sexual reproduction characterize many protozoans. The life cycles are unusually complex in parasitic protozoans of the class Sporozoa.

Protozoans are widely distributed in nature, and they occupy an important place in the food chain in many biocenoses and in the biosphere as a whole. Many protozoans (mastigophorans, radiolarians, infusorians) are components of marine plankton; they are encountered in large numbers because of frequent and rapid reproduction. The organisms form an important element in the food supply of marine zooplankton, particularly of cope-pods. Many protozoans (foraminifers, infusorians) are components of marine benthos, inhabiting the region from the littoral to the greatest depths. An infusorian fauna inhabiting the surface layers of marine sands has been described. Several protozoans are components of freshwater plankton and benthos. The species composition of freshwater protozoans is an indication of the degree of putrefaction of the water, that is, the degree of pollution by organic matter. Some protozoans, especially infusorians, are important in the diet of fingerlings—including commercial varieties—in the earliest stages of their development.

A great many protozoans have developed a parasitic mode of life, and two classes, the Sporozoa and Cnidosporidia, consist entirely of parasites. Of special significance are protozoans that parasitize man, domestic and game mammals, birds, and fishes. Human diseases caused by protozoans include malaria, leishmaniasis, giardiasis, and amebiasis. The most serious and frequently fatal diseases of cattle are caused by protozoan blood parasites; they include piroplasmosis, theileriasis, and trypanosomiasis. Parasitic protozoans also harm poultry (coccidiosis). Among fishes, protozoan diseases mainly afflict juvenile game fishes. For example, the parasitic infusorian Ichthyophthirius can kill fingerlings of all species. The class Cnidosporidia consists mostly of fish parasites (order Myxosporidia) and parasites of beneficial insects, for example, bees and silkworms. Methods of using parasitic protozoans, specifically Microsporidia, are being developed for controlling insect pests. The results to date have been promising.

Marine protozoans—radiolarians and especially fora-miniferans—have played a major role in the formation of sedimentary rock. Many limestones, chalky deposits, and other sedimentary rocks formed on the bottom of the seas in different geological epochs consist wholly or partially of skeletons (calcareous or siliceous) of fossil protozoans. Micropaleontological analysis is therefore used in geological exploration, chiefly oil prospecting.

Various protozoan species (amebas, infusorians) are widely used in the laboratory to study cytological, genetic, and biophysical problems. The laboratory cultivation of many species is highly developed. Protistology is the science concerned with protozoans.

[¦prōd·ə¦zō·ə]
(invertebrate zoology)
A diverse phylum of eukaryotic microorganisms; the structure varies from a simple uninucleate protoplast to colonial forms, the body is either naked or covered by a test, locomotion is by means of pseudopodia or cilia or flagella, there is a tendency toward universal symmetry in floating species and radial symmetry in sessile types, and nutrition may be phagotrophic or autotrophic or saprozoic.
McGraw-Hill Dictionary of Scientific & Technical Terms, 6E, Copyright © 2003 by The McGraw-Hill Companies, Inc.