a method of separating streams of particles according to certain of their properties; it is used in the investigation of nuclear radiation, cosmic rays, and the interactions of high-energy particles which are obtained by means of charged-particle accelerators. The anticoincidence circuit is based on the isolation of distinct groups of events whose simultaneity lies within the limits of a short time interval, termed the resolving time τ. The anticoincidence circuit registers the coincidence in time (with the precision of τ) of the signals from one specific group of counters in the absence of signals in the other group of counters.

Even if just one signal arises in one of the counters of the second group, the coincidence of signals in the first group of counters is not registered, hence the designation anticoincidence circuit. Figure 1 shows a representative experimental circuit which employs the anticoincidence method. The apparatus consists of ionizing particle counters C-I, C-II, and C-III, absorbers A and F, an electronic circuit called an anticoincidence circuit, and an electromechanical counter EMC. In the apparatus represented in Figure 1, ionizing particles are separated according to paths. A current pulse passes through the electromechanical counter EMC only in those instances when signals are produced simultaneously (coincidence) in counters C-I and C-II and, in addition, no signal arises in counter C-III. 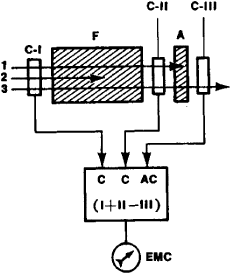 This event is brought about by particle 1, which remains in absorber A. Particle 2, which passes through three counters, causes the simultaneous appearance of a signal in countei C-III. At the same time, a signal (prohibition) is generated in the electronic system of the anticoincidence circuit which excludes the passage of the current pulse in the EMC. The event is not registered. In this experiment there is registered a group of particles with paths which differ according to the thickness of absorber A. If counter C-III is not switched in to the AC channel of the anticoincidence circuit and instead counter C-I or counter C-II is, then other logical problems can be resolved.