A property possessed by some metals, alloys, and salts of transition elements in which the atomic magnetic moments, at sufficiently low temperatures, form an ordered array which alternates or spirals so as to give no net total moment in zero applied magnetic field. The most direct way of detecting such arrangements is by means of neutron diffraction. See Neutron diffraction

The transition temperature below which the spontaneous antiparallel magnetic ordering takes place is called the Néel temperature. A plot of the magnetic susceptibility of a typical antiferromagnetic powder sample versus temperature is shown in the illustration. Below the Néel point, which is characterized by the sharp kink in the susceptibility, the spontaneous ordering opposes the normal tendency of the magnetic moments to align parallel to the applied field. Above the Néel point, the substance is para-magnetic, and the susceptibility obeys the Curie-Weiss

The cooperative transition that characterizes antiferromagnetism is thought to result from an interaction energy U of the form given in Eq. (2), where S i and S j are

the spin angular momentum vectors associated with the magnetic moments of neighbor atoms i and j, and Jij is an interaction constant. If all Jij are positive, the lowest energy is achieved with all S i and S j parallel, that is, coupled ferromagnetically. Negative Jij between nearest-neighbor pairs (i,j) may lead to simple antiparallel arrays; if the distant neighbors also have sizable negative Jij, a spiral array may have lowest total energy. The interaction constant in Eq. (2) probably arises from superexchange coupling. This is an effective coupling between magnetic spins which is indirectly routed via nonmagnetic atoms in salts and probably via conduction electrons in metals. See Ferromagnetism, Helimagnetism

The magnetic moments are known to have preferred direction. Anisotropic effects come from magnetic dipole forces and also from spin-orbit coupling combined with superexchange. Some nearly antiparallel arrays such as Fe2O3 show a slight bending (called canting) and exhibit weak ferromagnetism. The anisotropy affects the susceptibility of powder samples and is of extreme importance in antiferromagnetic resonance. See Magnetic resonance 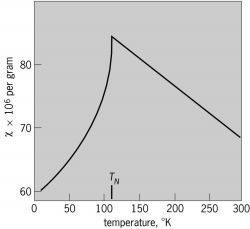 Magnetic susceptibility of powdered manganese oxide
McGraw-Hill Concise Encyclopedia of Physics. © 2002 by The McGraw-Hill Companies, Inc.
The following article is from The Great Soviet Encyclopedia (1979). It might be outdated or ideologically biased.

Up to the early 1930’s all substances were divided according to their magnetic properties into three groups: diamagnet-ic, paramagnetic, and ferromagnetic. Antiferromagnetism was discovered while the properties of paramagnetic materials at low temperatures were being studied. Paramagnetic materials are magnetized in a magnetic field so that the direction of magnetization coincides with the direction of the field. The magnetization / is proportional to the strength H of the magnetic field: / = κH. The proportionality factor κ, the magnetic susceptibility, is very small—from 10-5 to 10-6 in cgs units—for paramagnetic materials. The majority of paramagnetic substances are characterized by a specific form of the relation for magnetic susceptibility as a function of temperature—the susceptibility increases with a decrease in temperature in an inverse proportion (the Curie law; see Figure 1, curve a). At the end of the 1920’s and the beginning of the 1930’s compounds were discovered (oxides and chlorides of manganese, iron, cobalt, and nickel) that have a completely different form of temperature dependence for the magnetic susceptibility κ(T). In the curves of κ as a function of T for these compounds a maximum was observed (see Figure 1, curves bc and bd). In addition, it was discovered that below the temperature of the maximum, κ is strongly dependent on the orientation of the crystal in the magnetic field. If the field is directed, for example, along the principal crystallographic axis, then the value of κ along this direction (designated by kT) decreases, approaching 0 as T → 0°K. In directions perpendicular to this axis the value of κ (designated by κ⊥) remains constant (that is, it does not de

pend on temperature). In the curves that show the temperature dependence of the specific heat capacity for these substances, sharp maximums were also observed at the corresponding temperatures. These experimental facts pointed to some kind of rearrangement of the internal structure in the substance at a specific temperature. 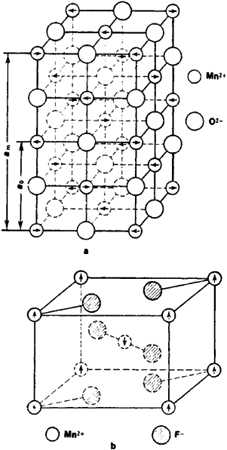 Two kinds of forces are responsible for the creation of antiferromagnetic ordering and for the particular orientation of the ions’ magnetic moments relative to the crystallographic axes: for the ordering it is the exchange interaction forces (electrical in nature), and for the orientation it is the forces of the magnetic anisotropy. In antiferromagnetism the exchange forces strive to make each pair of adjacent magnetic moments precisely antiparallel. But they cannot predetermine the direction of the moments relative to the crystallographic axes. This direction, which is known as the axis of easy magnetization, is determined by the magnetic anisotropic forces. These are the result of magnetic interaction between adjacent magnetic ions and the more complicated interactions of the electrons in the magnetic ions with electrical fields acting within the crystal.

To accord with these two types of forces, two effective magnetic fields are incorporated in the theoretical description of antiferromagnetism: an exchange field HE and an anisotropy field HA. The concept of having two effective magnetic fields acting in antiferromagnetic materials makes it possible to account for many properties, particularly their behavior in variable external magnetic fields. The transition from the paramagnetic state to the antiferromagnetic at the Néel temperature TN is the result of a phase transition of the second kind. A feature of this transition is the smooth (without a discontinuity) but very steep increase in the average value of the magnetic moment for each ion near TN (Figure 3). This increase explains the anomalies cited above—the 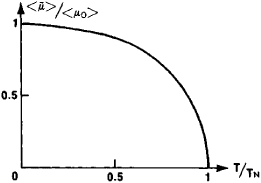 rise in specific heat capacity near TN and the similar temperature variation of the thermal expansion coefficient, elastic modulus, and a number of other quantities.

The study of antiferromagnetic materials has made a significant contribution to the development of modern concepts regarding the physics of magnetic phenomena. Among the related discoveries are new types of magnetic structures (weak ferromagnetism) and helical structures; new phenomena detected include piezomagnetism and magneto-electric effect; concepts on exchange and other types of interaction in magnetics have been extended. Antiferromagnetism has not yet found a practical use, because a large portion of the macroscopic physical properties show little change when a substance is transferred to the antiferromagnetic state. The high frequency properties are an exception. In many antiferromagnetic materials, strong resonance absorption of electromagnetic radiation is observed for wavelengths from 1 cm down to 0.001 cm.

[¦an·tē‚fer·ō′mag·nə‚tiz·əm]
(solid-state physics)
A property possessed by some metals, alloys, and salts of transition elements by which the atomic magnetic moments form an ordered array which alternates or spirals so as to give no net total moment in zero applied magnetic field.
McGraw-Hill Dictionary of Scientific & Technical Terms, 6E, Copyright © 2003 by The McGraw-Hill Companies, Inc.