A phenomenon in which a physical quantity depends not only on the temperature but also on the preceding thermal history. It is usual to compare the behavior of the physical quantity while heating and the behavior while cooling through the same temperature range. The illustration shows the thermal hysteresis which has been observed in the behavior of the dielectric constant of single crystals of barium titanate. On heating, the dielectric constant was observed to follow the path ABCD, and on cooling the path DCEFG. See Ferroelectrics 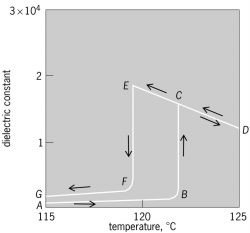 Perhaps the most common example of thermal hysteresis involves a phase change such as solidification from the liquid phase. In many cases these liquids can be dramatically supercooled. Elaborate precautions to eliminate impurities and outside disturbances can be instrumental in supercooling 60 to 80°C. On raising the temperature after freezing, however, the system follows a completely different path, with melting coming at the prescribed temperature for the phase change. See Crystal, Phase transitions

Feedback
Flashcards & Bookmarks ?
Please log in or register to use Flashcards and Bookmarks. You can also log in with
Flashcards ?
My bookmarks ?
+ Add current page to bookmarks
Mentioned in ?
References in periodicals archive ?
The difference between the melting and freezing temperatures, termed thermal hysteresis (TH), is used to detect and quantify antifreeze activity [11].
Moreover, this study also identified important features underlying the antifreeze activity based on the amino acid composition as well as physicochemical properties as derived from the AAindex database [21].
Firstly, analyses of PCA, propensity scores, and Gini index were performed as to characterize informative properties of antifreeze activity. Secondly, informative PCPs were used to investigate vital factors for improving the antifreeze activity of proteins.
[43] engineered the addition and deletion of repeated TmAFP coils in order to study whether the length of AFPs and the addition of binding site enhance the antifreeze activity (Figure 4).
It was found that single substitutions of Leu19Ala, Val20Ala, and Val41Ala decreased the activity by 20%, whereas double substitutions of Leu19Ala/Val41Ala and Leu10Ala/Ile13Ala decreased the antifreeze activity by more than 50% when compared to the wild type.
CryoProtect: A Web Server for Classifying Antifreeze Proteins from Nonantifreeze Proteins
To determine antifreeze activity of Basrai TLP, the frozen yogurt was prepared by using the following ingredients (weight in %): condensed skim milk 12.0; cream 7.0, ultrafiltered skim milk 33.0; corn syrup 11.0, sucrose 13.0; strawberry 1.0 and water 7.0.
According to Yu and Griffith [19], antifreeze activity of TLPs plays its role in inhibiting intercellular ice formation and recrystallization in cold tolerance twigs.
The antifreeze activity was analyzed at different freezing conditions and size and number of crystals were measured.
Molecular Characterization, Structural Modeling, and Evaluation of Antimicrobial Activity of Basrai Thaumatin-Like Protein against Fungal Infection
The added carbon-carbon bonds might make the new molecules more stable, but the proteins might need the carbon-oxygen bonds for good antifreeze activity, she says.
Chemists redesign natural antifreeze