[‚an·tē·ri′flek·shən ‚kōd·iŋ]
(engineering)
The application of a thin film of dielectric material to a surface to reduce its reflection and to increase its transmission of light or other electromagnetic radiation.
McGraw-Hill Dictionary of Scientific & Technical Terms, 6E, Copyright © 2003 by The McGraw-Hill Companies, Inc.
The following article is from The Great Soviet Encyclopedia (1979). It might be outdated or ideologically biased.

the application of one or more nonabsorbing films to the surfaces of optical components in order to reduce the reflection coefficients of the surfaces. Without such antireflection films, light losses on reflection may be considerable. Thus, in the visible region of the spectrum—that is, for wavelengths λ between 400 and 700 nanometers (nm)—the losses can reach 10 percent of the intensity of the incident radiation even when the rays are at normal incidence to the boundary between the air and the optical medium (Figure 1). In systems with a large number of surfaces, such as compound lenses, the losses of light can exceed 70 percent. Repeated reflection from refracting surfaces causes scattered light to appear inside the instrument. As a result, the quality of the images formed by the optical system of the instrument deteriorates. These undesirable effects can be eliminated by the use of antireflection coatings, which is one of the most important applications of the optics of thin films. 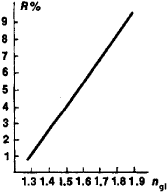 Figure 1. Reflection coefficient R for light incident normally on an air-glass interface as a function of the refractive index ngl of the glass; R is calculated from Fresnel’s formulas

The action of an antireflection coating is due to the interference of the light reflected from the front and rear boundaries of the antireflection film. This interference results in the mutual extinction of the reflected light waves and, consequently, in an increase in the intensity of the transmitted light. At nearly normal angles of incidence, the antireflection effect is maximal if the thickness of the thin film is equal to an odd number of quarter wavelengths of the light in the film material and if the refractive index n2 of the film satisfies the equation

where n1 and n3 are the refractive indexes of the media bordering the film. In actual practice, the first medium is often air. The greater the difference n3 – n2, the more strongly is the reflected light attenuated. If, however, n2 > n3, the interference of the rays reflected from the boundaries of the film increases the intensity of the reflected light (Figure 2).

By varying the thickness of the antireflection coating, the reflection minimum can be shifted to different regions of the spectrum. Coatings with minimum reflection in the yellow-green region (λ = 555 nm), which is the region of maximum sensitivity of the human eye, are applied to lenses used in black-and-white photography. In reflected light such surfaces have a purple tinge, hence the term “blue optics.” In coated lenses for color photography, the reflection is minimized in the blue region of the spectrum, and the surfaces have an amber tinge. 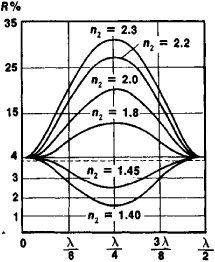 For optical components made of glass with a low refractive index, coating with a single-layer film is not very effective. The use of two-layer antireflection coatings permits almost complete elimination of reflection from the surface of the substrate component in a narrow region of the spectrum, regardless of the component’s refractive index. If three-layer antireflection coatings are used, uniformly low (~0.5 percent) reflection can be obtained in a wide spectral region, for example, throughout the entire visible region (Figure 3). Two-layer and three-layer coatings are used in the ultraviolet, where single-layer coatings are 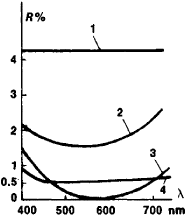 not very effective because of the small value of n3. In theory, the best antireflection coating for a wide region of the spectrum can be obtained through the use of inhomogeneous antireflection films whose refractive indexes vary smoothly from the n of the substrate to the n of the surrounding medium. In the inhomogeneous films obtained in practice, n varies stepwise. The width of the spectral region with low reflection increases with the number of steps; at the same time, the variation of the refractive index becomes smoother.