One of the three living orders (sometimes called Salientia) of the class Amphibia, which includes the frogs and toads. About 2400 species of frogs are known. Only the frozen polar regions and remote oceanic islands are without native frogs, and 80% of the species live in the tropics.

Frogs are short-bodied animals with a large mouth and protruding eyes. The externally visible part of the ear, absent in some forms, is the round, smooth tympanum situated on the side of the head behind the eye. There are five digits on the hindfeet and four on the front. Teeth may be present on the upper jaw and the vomerine bones of the roof of the mouth, but are found on the lower jaw of only one species. Often teeth are totally lacking, as in toads of the genera Bufo and Rhinophrynus. The short vertebral column consists of from 6 to 10 vertebrae, usually 9, and the elongate coccyx. The sacral vertebra precedes the coccyx and bears more or less enlarged lateral processes with which the pelvic girdle articulates. A characteristic feature of frogs is the fusion of the bones in the lower arm and lower leg, so that a single bone, the radioulna in the arm and the tibiofibula in the leg, occupies the position of two in most other tetrapods.

The one character of frogs that comes to the attention of most persons, including many who may never see a frog, is the voice. Most frogs have voices and use them in a variety of ways. In the breeding season great numbers of male frogs may congregate in favorable sites and call, each species giving its own characteristic vocalization. Because no two species breeding at the same time and place have identical calls, it is assumed that the call is important in aiding individuals to find the proper mate. In some species it appears that the female is active in selecting the mate and may be responding to the mating call, but the call may not act in exactly the same way in other species. The mating call is given with the mouth closed. Air is shunted back and forth between the lungs and the mouth, so frogs can call even though submerged. Many species possess one or two vocal sacs, which are expansible pockets of skin beneath the chin or behind the jaws. The sacs (Fig. 1), which may be inflated to a volume as great as that of the frog itself, serve as resonators. 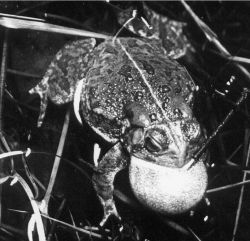 Other noises made by frogs include the so-called fright scream given with the mouth open, and the warning chirp, which evidently serve as a sex recognition signal when one male contacts another. Some calls evidently serve as territorial signals.

Breeding and development typically take place in the following manner. The male grasps the female about the body with the forelegs, a procedure called amplexus, and fertilizes the eggs externally as they are extruded. The number of eggs may be quite large (up to 20,000 in the bullfrog or 25,000 in a common toad) or may be as few as one in a frog of the West Indies. The larva, called a tadpole, is at first limbless and has external gills and a muscular tail with dorsal and ventral fins (Fig. 2). At hatching there is no mouth opening present, but one soon forms that develops a horny beak and several rows of labial teeth not at all like the true teeth of the adult frog. Shortly after the tadpole hatches, the gills become enclosed within chambers and are no longer visible externally. Except for the gradual development of the hindlimbs, no additional external changes take place as the tadpole grows until the time for metamorphosis. The anterior limbs, which have been forming hidden in the gill chambers, break through the covering skin as metamorphosis begins. The tail dwindles in size as it is absorbed, while the mouth assumes the shape of that of the adult frog. Many other changes are taking place internally, including shortening of the intestine and adapting it to the carnivorous diet of the adult frog.

The tadpole, or larval, stage of the frog Rana pipiens

All frogs are carnivorous. The kind of food seems to depend largely upon the size of the frog, whose capacious mouth permits somewhat astonishing feats of swallowing. A large bullfrog, for example, may snap up low-flying bats, ducklings, snakes, and turtles. Insects and other invertebrates form the bulk of the diet of most frogs. The tongue, moistened by a sticky secretion from the intermaxillary gland in the roof of the mouth, is used to catch smaller prey, while larger items of food may bring the front limbs into play. When swallowing, a frog will usually depress the eyeballs into the head to aid in forcing the food down the pharynx. In contrast to transformed frogs, most tadpoles are vegetarian and feed on algae. A few are largely carnivorous or sometimes cannibalistic, and even vegetarian species will scavenge for dead animal matter.

The habitats of frogs are as various as the places where fresh water accumulates. Lakes and streams are tenanted year-round by many species, and others migrate to these places in the breeding season. Any permanent source of water in the desert is likely to support a population of one or more species, and when rainstorms occur, the air around a temporary pool may be filled with mating calls for a few nights, while the frogs take advantage of the water for breeding. As often as not, the pool goes dry before the tadpoles metamorphose, and the adult frogs retreat underground to await another rain. Moist tropical regions provide an abundance of habitats little known to temperate regions, such as the air plants (bromeliads) that hold water and so provide a moist home and breeding site for frogs that may never leave the trees.

Although the majority of frogs fall into fairly well-defined familial categories, the arrangement of the families into subordinal groups by different authorities is not consistent, and there is controversy about the relationships of some smaller groups.