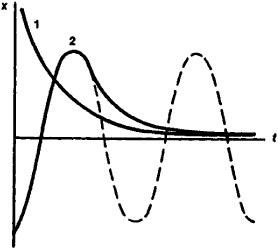 electrical resistance R of the circuit, determining the energy losses in that circuit, attain the critical value

, where C and L are respectively the capacitance and inductance of the circuit. Aperiodic systems are used in automatic control devices, broadband amplifiers of electrical oscillations, and so on.