1. the highest point; vertex
2. Astronomy the point on the celestial sphere, lying in the constellation Hercules, towards which the sun appears to move at a velocity of 20 kilometres per second relative to the nearest stars

1. (solar apex) The point on the celestial sphere toward which the Sun and the Solar System are moving relative to the stars in our vicinity. The apex lies in the constellation Hercules at a position RA 18h, dec +30°, close to the star Vega. The point diametrically opposite to the direction of this relative solar motion is the antapex (or solar antapex); it lies in the constellation Columba. The position of the apex can be determined from an analysis of the proper motions, radial velocities, and parallaxes of stars, based on the assumption that solar motion is equal and opposite to the group motion of stars. The velocity of this motion has been calculated as about 19.5 km s–1 with respect to the local standard of rest, when all available information on proper motion and radial velocity is used. The value is lower when only the stars in the Sun's immediate neighborhood are considered. Solar motion produces the secular parallax of stars.
2. The point on the celestial sphere toward which the Earth appears to be moving, at a given time, as a result of its orbital motion around the Sun.

[′ā‚peks]
(anatomy)
The upper portion of a lung extending into the root.
The pointed end of the heart.
The tip of the root of a tooth.
(botany)
The pointed tip of a leaf.
(engineering)
In architecture or construction, the highest point, peak, or tip of any structure.
(geology)
The part of a mineral vein nearest the surface of the earth.
(mathematics)
The vertex of a triangle opposite the side which is regarded as the base.
The vertex of a cone or pyramid.

In architecture or construction, the highest point, peak, or tip of any structure. 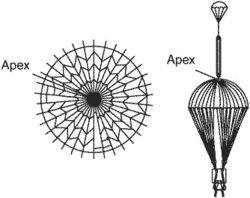 Top-center portion of a parachute canopy where suspension lines cross.

Feedback
Flashcards & Bookmarks ?
Please log in or register to use Flashcards and Bookmarks. You can also log in with
Flashcards ?
My bookmarks ?
+ Add current page to bookmarks
TheFreeDictionary presents:
Write what you mean clearly and correctly.
Mentioned in ?
References in periodicals archive ?
In all individuals, the right coronary artery originated the subsinusal interventricular branch, which was invariably placed in homonymous groove, and ended in the apex of the heart in four individuals (two males and two females) (66.6 %).
Coronary Irrigation in Puma concolor (Carnivora: Felidae)/Irrigacion Coronaria en Puma concolor (Carnivora: Felidae)
It was variably distributed to the conducting system (23%), anterior wall of the RV (100%), interventricular septum (IVS) (51.9%) and the apex of the heart (5.8%).
Prevalence and distribution of the third coronary artery in Kenyans/Prevalencia y distribucion de la tercera arteria coronaria en Kenianos