apocalypse (əpŏkˈəlĭps) [Gr.,=uncovering], genre represented in early Jewish and in Christian literature in which the secrets of the heavenly world or of the world to come are revealed by angelic mediation within a narrative framework. The genre seems to have arisen in Palestine in the 3d cent. B.C., perhaps as a protest against an oppressive and dominant establishment, either Gentile or apostate Jewish. The writing is characterized by otherworldly journeys, visions, animal imagery derived from the common fund of ancient Middle Eastern mythological imagery, and number symbolism. Apocalyptic eschatology is marked by the conviction that God will intervene decisively in the present evil age and vindicate his suffering elect over their oppressors, raising the dead, consigning the wicked to eternal destruction, and establishing a new creation. In the Bible, apocalyptic elements are present in the books of Ezekiel, Isaiah, Joel, Zechariah, and Daniel. The collection known as the Pseudepigrapha contains a number of early Jewish apocalypses, including 1 Enoch, 4 Ezra, and 2 Baruch. In the New Testament the book of Revelation is often called the Apocalypse. 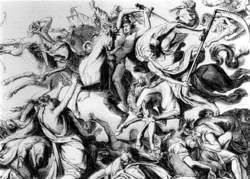