Appearance of a Vampire 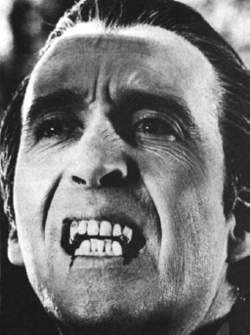 Christopher Lee, shown here in Taste the Blood of Dracula, was responsible for popularizing the idea that vampires have fangs. Bela Lugosi (seen here in Mark of the Vampire) is most responsible for developing the stereotypical appearance of a vampire.

Appearance of a Vampire

Any discussion of the appearance of the vampire must take into account the several vampire types. The contemporary vampire of the 1980s and 1990s has shown a distinct trend toward a normal appearance that allows them to completely fit in with human society and move about undetected. Such modern vampires have almost no distinguishing characteristics with the exception of fangs (extended canine teeth), which may be retractable and show only when the vampire is feeding. As such, the contemporary vampire harks back to the vampire characters of the pre-Dracula literary vampires. There was little in the appearance of Geraldine, Lord Ruthven, Varney the Vampyre, or Carmilla to distinguish them from their contemporaries (though Varney had prominent fangs).

During the last generation, vampire novelists have occasionally sought some way to make the vampire’s appearance distinctive while keeping them able to blend into society. Anne Rice describes the vampires skin as pale and reflective though possibly the most notable alteration are the fingernails that look like they were made of glass. Stephenie Meyer, in her Twilight series, posits vampires who have a heightened even supernatural beauty. While Rice’s vampires are beautiful, because of the tendency of older vampires to turn humans whom they find attractive and with whom they have fallen in love, Meyer suggests that becoming a vampire enhances the level of beauty in the person who is turned. Their skin becomes flawless and takes on a texture and feel resembling marble. If exposed to sunlight; it will sparkle.

In the television series Buffy the Vampire Slayer and its spinoff Angel, the vampires usually appeared just as they had in real life. Only when aroused, angry, or about to feed do they take on a distinctive appearance. As was the case in the 1990s television series Forever Knight, the vampires in Buffy for a brief time change dramatically and horrifically. They are said to put on their “game face.” The eyes change color, the face distorts, and the fangs come out of hiding. They are obviously something different.

In spite of the changes introduced by Forever Knight, Buffy the Vampire Slayer, and the writings of Anne Rice and Stephenie Meyer, the contemporary vampire is still largely based on the dominant figure of Dracula as developed for the stage by Hamilton Deane and especially as portrayed by Bela Lugosi. Hamilton Deane must be credited with the domestication of Dracula and making him an acceptable attendee at the evening activities of Victorian British society. Deane’s Dracula donned evening clothes and an opera cape with a high collar.

Bela Lugosi in the movie Dracula (1931) confirmed Deane’s image of the vampire in popular culture and added to it. He gave Dracula an eastern European accent and a swept-back, slicked-down hairdo with a prominent widow’s peak. In the Horror of Dracula (1968), Christopher Lee added the final prominent feature to Dracula’s appearance, the fangs. Prior to Lee the vampire had no fangs, at least no visible ones. Lee, the first prominent vampire in Technicolor, also gave Dracula a set of red eyes, which to a lesser extent has become a standard (though by no means unanimous) aspect of the vampire’s appearance, especially in motion pictures. Since Lee, the image of the vampire in popular culture has been set. The fangs, the cape, and to a lesser extent, the evening clothes, the red eyes, and the widow’s peak now quickly convey the idea that a person is a vampire. The use of these definitive signs of a vampire’s appearance is most evident on greeting cards and the artwork on the cover of vampire novels and comic books.

This modern image of the vampire, with the exception of the extended canine teeth, varies considerably from both that of Dracula, as presented in the original novel of Bram Stoker, and the vampire of folklore. The latter, at least in its eastern European incarnation, was a corpse, but a corpse notable for several uncorpselike characteristics. Its body might be bloated and extended so that the skin was tight like a drum. It would have extended fingernails that had grown since its burial. It would be dressed in burial clothes. It would stink of death. The ends of its appendages might show signs of having been eaten away. In appearance the folkloric vampire was horrible, not so much because it was monstrous, but because of its disgusting semi-decayed nature.

Between the folklore vampire and the contemporary vampire of popular culture lies the Dracula of Bram Stoker’s novel. He was described in some detail in the second chapter of the book—he was dressed in black clothes; his hair was profuse and his eyebrows massive and bushy; he had a heavy moustache; his skin was pale; he had hair in the palm of his hand and long extended fingernails. Most noticeable were the brilliant extended canines that protruded over his lower lips when the mouth was closed. His eyes were blue, though they flashed red when he was angry or upset. He was of mature years, though he got younger as the novel proceeded. John Carradine‘s stage productions of Dracula in the 1950s were probably closest to Dracula as he appeared in the novel.