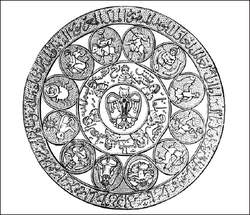 The Arabic Parts are arithmetically derived points on the ecliptic (the path the Sun, from our terrestrial perspective, appears to travel during the course of a year) that represent the synthesis of two or more astrological components (e.g., planets, house cusps, or even other Arabic Parts). The longitudinal distance between them is measured and then projected from a meaningful point in the astrological chart, usually the ascendant. The degree, minute, and second of zodiacal longitude, this distance reached is called the part. Modern astrological texts (post-1800) usually do not distinguish between diurnal and nocturnal charts (astrological charts—be they natal, horary, electional, or other—are erected for times when the Sun is above the horizon or diurnal, or below the horizon or nocturnal), yet the original practice was to do so in most, if not all, cases. Thus, in diurnal charts the formula is often different from that in nocturnal charts.

For example, the most commonly used Arabic Part, the Pars Fortunae (Part of Fortune), is found in a diurnal figure (a traditional term for an astrological chart) by taking the distance from the Sun to the Moon, in the order of the signs, and projecting it from the ascendant, also in the order of the signs. Let it be assumed that the ascendant of a native born in the daytime with 12 Pisces 30 rising has the Sun at 4 Aquarius 46 in the eleventh house and the Moon at 0 Taurus 15. The distance between the Lights (a traditional term for the Sun and the Moon) is 85°29’. When this distance is added to the ascendant, the part is found to be at 67°53’ or 7 Gemini 59.

Should the figure be nocturnal, however, the Part of Fortune is found from the Moon. Thus, the distance from the Moon to the Sun, in the order of the signs, is found to be 274°31’. This distance, projected from the ascendant (12 Pisces 30) locates the part at 257°01’ or 17 Sagittarius 01.

In traditional astrology (that practiced in Europe until the mid-seventeenth century), the Arabic Parts were used for several purposes. First, they were used in horary figures to assist in judgment when the planetary testimony was obscure. One circumstance in which this seems to have been done was when, in a horary figure, one planet is the significator of a matter and another planet applies to some aspect of this significator. In such a case, the astrologer may not know if the second planet will hinder or assist the business. The astrologer might take the distance from the aspect in question to the significator and—making an Arabic Part of this distance—project it from the ascendant or other relevant house cusp (say, the third, if the business is about travel, siblings, etc.). The astrologer would then judge whether the application was beneficial or not by determining if the ruler of the part was a benefic. Likewise, a judgment as to good or evil could be made in this way, again on the basis of the benefic or malefic nature of the part’s ruler. The strength of the ruler of the part and its aspect (or lack of same) to the significator could also yield helpful information. This is what Guido Bonatti obscurely alludes to when he cites Albumasar in his discussion of the parts in Liber Astronomiae. Lynn Thorndike, in The History of Magic and Experimental Science, calls Bonatti “the most influential astrologer of the thirteenth century.” Bonatti’s work (Liber Astronomiae) was a major source for traditional medieval European astrological practice.

In his “146 Considerations” (Tractatus V of Liber Astronomiae; translated into English and published by Henry Coley in 1676, and recently republished by the American Federation of Astrologers under the title Anima Astrologiae), Bonatti discusses another way the concept of the parts could be used to clarify murky testimony in horary figures when the planetary indications are inscrutable. He suggests making parts of those house rulers that related to the matter considered. This is what he advocates in Considerations 144 and 146.

Jean Ganivet, in Amicus Medicorum (1508), provides us with an example of the use of the parts in iatromedical diagnosis. He casts a horary figure for the dean of Vienne, seeking to determine whether the dean would survive his current illness or not. He concludes, after considering the Lights, the Part of the Killing Planet, the Part of Death, the Part of Life and the Part of Fortune, all of which were adversely placed, that the dean will fall into delirium in 24 hours and die within two days. He reports that such was the case.

In natal figures, the parts were usually used to get a deeper understanding of the native’s life. For instance, the Part of Fortune was called the lunar ascendant and provided the medieval astrologer with information relating to the native’s inner motivation (as opposed to outer drives imposed upon one by physical and worldly demands). The Part of the Sun (Pars Solis, Pars Futurorum, Pars Spiritus, Pars Daemonis) signifies, Bonatti tells us, in Libe Astonomiae, the soul and the body and their quality, as well as faith, prophecy, religion and the culture of God, secrets, cogitations, intentions, hidden things, etc. It is found in a way different from that in which the Part of Fortune is found: In diurnal figures, the distance from the Moon to the Sun is projected from the ascendant; in nocturnal figures, the distance from the Sun to the Moon is projected from the ascendant. Bonatti’s work catalogs the parts according to the themes of the houses. His parts of the seventh house contains numerous parts intended to reveal the marital fidelity of husband and wife, thus providing the astrologer with material useful in synastry, although it is here that his medieval monkish misogyny shines forth most glaringly.

The parts also had application in economic forecasting. Bonatti gives us an involved (and largely accurate) technique for commodities forecasting! In addition, the parts were used in mundane figures (ingresses; also known as Revolutions of Years of the World).

The parts were used extensively by the Arabic astrologers, who greatly increased their number. Bonatti, who relies on Arabic sources, lists 128 parts. Al-Biruni, who is one of Bonatti’s sources, lists 143. Al-Biruni advocated a rational astrology based on actual astronomical verities and expressed doubt bordering on scorn with regard to horary astrology, which he likened to sorcery. In discussing the parts (which he calls Lots), he complained, “It is impossible to enumerate the lots which have been invented for the solution of horary questions and for answering enquiries as to prosperous outcome or auspicious time for action; they increase in number daily.”

The history of the parts predates their Arabic usage, stretching back to the Hellenistic Period, perhaps as early as 300 b.c.e., and, conceivably, even to Greco-Babylonian times. Thus, the name “Arabic” Parts is a misnomer. The parts are found in Dorotheus’s Pentateuch (first century c.e.) and in the Liber Hermetis, which Wilhelm von Gundel and Le R. P. Festugière regard as a pre-Islamic Hellenistic Hermetic text exemplifying Egyptian temple astrology of an era possibly as early as the third century b.c.e. Thus, the “Arabic” Parts might better be called Hermetic or Egyptian Parts.

The rather vague handling of the Part of the Sun and the Part Hyleg by Bonatti, Albumasar, and Al-Biruni also implies that the parts originated in pagan times. Bonatti, drawing on Albumasar and Al-Biruni, seems intentionally vague in merely mentioning that the Part of the Sun was relevant to “faith, prophesy and the culture of God.” He does not elaborate on this in any way. Al-Biruni, who gives symbols for many of the parts, indicates the Part of the Sun, which he calls the Part of the Daemon, as a circle with two horns—as a crescent emerging from behind a disk. The glyph resembles the head of a medieval Roman horned demon; a figure not originally regarded as evil. In light of the well-attested fact that much of the astrological lore of Albumasar, Al-Biruni, Messahalla, and others came from the polytheistic Hermetic Sabian community at what is today Harran, Iraq, there has been a long-standing assumption on the part of some esotericists that the medieval astrological tradition was a vehicle for preserving the Hellenistic pagan Hermetic gnosis. This assumption appears correct. The reticence of both the Muslim and Christian writers (such as Albumasar, Al-Biruni, and Bonatti) was probably due to their wish to avoid censure by their respective religious authorities. The daemon referred to in the name Part of the Daemon may well be the Neoplatonic—Hermetic Agathodaemon, which was the chief deity of the pagan Sabians.

Another part that receives vague treatment by Bonatti is the Part Hyleg. Bonatti says that it is the root of the other parts and can exist without them, but they cannot exist without it and that “the ancients could have said more about it had they wanted but refrained from doing so because it was involved with other things.” This statement is the very epitome of obscurity. The key to the mystery of this part is to determine how it is found and how it got its name. It is calculated as the line extending from the position of the conjunction or prevention (i.e., the new or full moon) prior to birth to the position of the Moon at the time of birth and then projected from the ascendant. It is also called the Radix Vitae (Root of Life) and comprehends the whole life of the native, which links it to the Gnostic and Hermetic mysteries of reincarnation discussed in the Corpus Hermeticum (attributed to Hermes Trismegistus). Although the Corpus Hermeticum we have today dates from the early centuries c.e., the cult whose doctrines it embodies began to coalesce in Egypt with Alexander’s conquest (323 b.c.e.) around the notion that the Greek god Hermes and the Egyptian Thoth were one in the same, an idea that had been commonly accepted since Plato’s time. The Hermetic doctrine of reincarnation, which bears resemblance to the Hindu and Buddhist concepts, is found scattered throughout the libelli comprising the Corpus, but the following are especially relevant: Libellus I, sections 13–18; Libellus III, section 4; Libellus VIII; and Libellus X, sections 16–22. In Libellus XI, sections 7–8a, the Moon is referred to as “the instrument by which birth and growth are wrought,” and we are told that the Moon “divides the immortals from the mortals.”

This new understanding of the antiquity of the parts may not be the final word. If the parts, as it now seems certain, were used as early as 300 b.c.e., we may be dealing with a tradition that is far older. The ancient usage of the parts has had an effect on modern astrological practice. Besides being resurrected in the twentieth century in the context of traditional astrology, the concepts underlying the parts have been influential in modern astrological innovations. For example, the Arabic Parts prefigure by at least 2,000 years the planetary pictures of the Hamburg School of Uranian Astrology and similar practices of the chronobiologists.