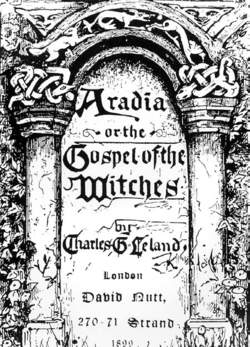 In the late 1800s, the folklorist Charles Godfrey Leland, first president of the Gypsy Lore Society, befriended a young woman in Florence, Italy, who claimed to be a Witch. Her name was Maddalena and she came from the Romagna Toscana, a wild part of the country. She claimed that her family on her mother's side had been practicing Witches for several generations. Leland obtained from Maddalena a large amount of material pertaining to Witchcraft as practiced in that area and to the Witches' beliefs. He was a prolific author, writing on a wide variety of subjects, and he alludes to some of Maddalena's material in two of his books, Gypsy Sorcery and Fortune Telling (1891) and Etruscan-Roman Remains in Popular Tradition (1892). But he presents most of it in his book, Aradia, or the Gospel of the Witches of Italy (1899). In his preface he says: If the reader has ever met with the works of the learned folk-lorist G. Pitré, or the articles contributed by "Lady Vere de Vere" to the Italian Rivista, or that of J. H. Andrews to Folk-Lore he will be aware that in Italy there are numbers of strege, fortune-tellers or witches, who divine by cards, perform strange ceremonies in which spirits are supposed to be invoked, make and sell amulets, and, in fact, comport themselves generally as their reputed kind are wont to do, be they Black Voodoos in America or sorceresses anywhere. But the Italian strega or sorceress is in certain respects a different character from these. In most cases she comes of a family in which her calling or art has been practised for many generations. . . even yet there are old people in the Romagna of the North who know the Etruscan names of the Twelve Gods, and invocations to Bacchus, Jupiter, and Venus, Mercury, and the Lares or ancestral spirits, and in the cities are women who prepare strange amulets, over which they mutter spells, all known in the old Roman time, and who can astonish even the learned by their legends of Latin gods, mingled with lore which may be found in Cato or Theocritus. With one of these I became intimately acquainted in 1886, and have ever since employed her specially to collect among her sisters of the hidden spell in many places all the traditions of the olden time known to them.

He goes on to say that among other strange relics, she obtained for him a "Gospel" (vangelo) which, he believed, came principally from oral narration. He published this under the title Aradia, Gospel of the Witches. Since Leland was seventy-five years old at the time of its publication, many of his fellow folklorists tended to believe that their leader was having his leg pulled by this young Italian "sorceress." In fact, the book was not a big seller. T.C. Lethbridge suggests it was "smothered in some way by vested interests." Certainly it was overlooked by such notable witchcraft researchers as Margaret Alice Murray and Pennethome Hughes. It was not until 1968 that it was finally reprinted, by the Buckland Museum of Witchcraft and Magic, in New York. Since then there have been a number of reprinted editions.

The book, as produced by Leland, is published in the original Italian together with an English translation. Part of the book is in prose and part in verse.

Lethbridge hazards a guess that the vangelo, as presented by Maddalena, dates from about the fourteenth century, although he believes the original oral form goes back to antiquity. He points out that the text, composed for a rural community, focuses on a time when the Witch cult was the religion of the suppressed classes.

The text tells of the Moon, Tana, "Queen of Witches All," the goddess falling in love with her brother Lucifer the Sun. From this union, Aradia is born and becomes the Messiah of the Witch cult. Leland says that Aradia is obviously Herodias, who was earlier associated with Diana as Queen of the Witches. (Lethbridge compares Aradia to the Welsh goddess Arianrhod.) Tana (Diana) tells her daughter that she must become mortal and go down to earth to teach Witchcraft to humankind. This Aradia does, and when finished, she tells her followers that she must return to heaven. If further magical instruction was required, she tells them, they should appeal to Diana, gathering once a month at the full of the moon. At that gathering they were to extinguish all lights and play the game of Benevento, which Lethbridge informs us is basically a general sexual mating, then hold a sacred supper.

On Aradia's return, she grants gifts to her followers: to bless or curse with power, converse with spirits, find hidden treasure, understand the voices of the wind, change water into wine, tell fortunes with cards and with the hand, cure diseases, beautify the ugly, tame wild animals, and more.

There then follows an alternative text in which it is said that Diana was the first act of creation, and divided herself into the darkness and the light. Lucifer, as her other half, is her brother the light. Diana spun the lives of humans on her wheel, which Lucifer turned. She turned mice into stars and became the Queen of Heaven, of Witches, and of the rain. But Diana trembled with desire for Lucifer and when both went down to earth she seduced him and brought about Aradia.

There are a number of Witches who draw on the teachings given in Aradia, and many who have adopted some of the language of the vangelo. Aradia's charge to the worshipers, exhorting them to "adore the potent spirit of your queen, my mother, great Diana," was adopted and reworded by Doreen Valiente, to become the Charge of the Goddess in Gardnerian Wicca (see Coven, Covenstead, Covendom.)

Interestingly, Sir Walter Scott remarks that "In Italy we hear of the hags arraying themselves under the orders of Diana (in her triple character of Hecate doubtless), and Herodias, who were the joint leaders of their choir." This was written in 1831, nearly seventy years before Leland's book appeared.

Feedback
Flashcards & Bookmarks ?
Please log in or register to use Flashcards and Bookmarks. You can also log in with
Flashcards ?
My bookmarks ?
+ Add current page to bookmarks
TheFreeDictionary presents:
Write what you mean clearly and correctly.
Mentioned in ?
References in periodicals archive ?
The Aradia Ensemble--ten strong for this performance, conducted by Kevin Mallon--provided the accompaniment, as well as the "Scherzo" from Schubert's Octet as an overture.
Schubert's only opera, Fierabras, is rarely performed and it's not hard to see why
The sources warned of fine of SR 50,000 fine and six-month imprisonment in case of overstay by Umrah pilgrims in Saudia Aradia, with additional imprisonment if fine was not paid.
Religious ministry registers over 500 Umrah travel agents
Aradia loses her parents to war and her aunt to suicide by hanging.
AN ANNOTATED LIST OF FANTASY NOVELS INCORPORATING TAROT (1968-1989)
Leicester: Genevive Adjei, Anthony DeLuca, Meagan Devereaux, Mary Lambert, Aradia Maser, Caleb Orth, Emily Orth, Joseph Potvin
Education Notes
On Saturday, March 23, 2013, Aradia Knight CEO of Aidara, Inc., a bookkeeping outsourcing firm will deliver the “Frugal Spending in Tough Times - Tips for Small Businesses” teleseminar.
Black Business Women Network Offers Free Business Teleseminars
The cast and crew spent nearly two months filming OLincolnO in Virginia and reportedly had several restaurants and shops that were favorites, which are now part of the trail, including Aradia, Brickhouse Run and Bistro Bobette.
Destination News Alert - North America
A Wiccan group called the Circle of Aradia, for example, does not believe in teaching its doctrines to men and thus does not have to hire them as clergy.
Hosanna in the highest court: church school dispute at the Supreme Court will test the limits of religious croups' 'ministerial exception' from civil rights laws
The Canadian Aradia Ensemble, under ex-RNCM Kevin Fallon, start out on the Theatre Music of Henry Purcell, with four plays: The Gordion Knot Untied, Circe, Amphityron and Sir Barnaby Whigg.
Classical
For 18 years, she served as the executive director of Aradia Women's Health Center in Seattle and was the recipient of the 2006 William O.
What is a woman's worth?/Quelle est la valeur d'une femme?
And despite the cross-generational learning that Jane Dickie and her co-authors describe in "Heirs of Aradia, Daughters of Diana," in which undergraduates interview women who had lived in a "radical, separatist" community twenty to thirty years earlier, the experiment offers small hope for countering this charge.
The Cartography of Age
In Toronto, Kevin has sung as a soloist with all the major early music ensembles including the Toronto Consort, Toronto Chamber Choir, Aradia, Opera Atelier, and Tafelmusik.
The child's voice: a closer look at pedagogy and science