, town, France
Orange (ôräNzhˈ), town (1990 pop. 28,136), Vaucluse dept., SE France. An agricultural market center, the town also produces refined sugar, pâtés, preserves, wool, and shoes. Tourism is also important. Orange was an earldom probably founded by Charlemagne. It became the capital of a principality (12th cent.) and was passed from family to family and eventually (1554), through inheritance, to William the Silent, of the house of Nassau. Among William's descendants were William III of England and the ruling family of the Netherlands. Orange was conquered (1672) by Louis XIV and confirmed in French possession by the Treaty of Ryswick (1697) and the Peace of Utrecht (1713), although the title remained with the Dutch princes of Orange. The town has important Roman ruins, notably a triumphal arch (1st cent. A.D.) and an amphitheater (c.A.D. 120) which is still in use.

3 City (1990 pop. 29,925), Essex co., NE N.J.; settled c.1675, set off from Newark 1806, inc. as a city 1872. Orange and the surrounding municipalities of East Orange, West Orange, South Orange, and Maplewood are known as “The Oranges,” a single suburb of Newark and New York City. Although chiefly residential, Orange has some manufacturing.

4 City (1990 pop. 19,381), seat of Orange co., SE Tex., a deepwater port on the Sabine River at its junction with the Intracoastal Waterway; settled c.1800, inc. 1858. It is a port of entry, with shipyards, oil and gas wells, and major petrochemical plants. Steel, rubber and paper products, and plastics are manufactured. Cattle, hogs, honey, and wine are also produced. The U.S. navy has a mothballed fleet there.

orange, name for a tree of the family Rutaceae (rue, or orange, family), native to China and Indochina, and for its fruit, the most important fresh fruit of international commerce. Its physical characteristics (especially the rich citric acid and vitamin content of the fruit) and history of cultivation are similar to those of the other types of citrus fruits, all of which are species of Citrus.

Among the commercially important species of oranges are the sweet, or common, orange (C. sinensis), which furnishes most of the varieties for commercial growing, including the Baiá, or Washington, navel (a winter orange), and the Valencia (a summer orange); the sour, or Seville, orange (C. aurantium), which is grown in the United States chiefly as understock on which to bud sweet orange varieties, although in Europe its fruit is much used in marmalade; the mandarin (C. reticulata or nobilis), or the “kid glove,” or loose-rind, group of oranges, which includes the Satsuma varieties, known for their hardiness, tangerines, and clementines. Oranges hybridize freely. The Temple orange is a cross between a mandarin and a sweet orange; the citrange a cross between the inedible trifoliate orange (C. trifoliata) and a sweet orange; and the tangelo is produced by crossing a tangerine and a grapefruit.

Columbus brought the orange to the West Indies, and it is known that orange trees were well established in Florida before 1565 and were growing in California by 1800. The orange now grows in the warm parts of all continents. Flowers and fruits in all stages of development are on the tree throughout the year, although a large portion of the fruits ripen at one time. The orange is attacked by many insects and fungus diseases and is quite sensitive to frost. If the fruits are picked when still “green” (though fully mature), they must undergo a bleaching or degreening process to bring out the orange or yellow color in their rinds. Some oranges are artificially colored and waxed before marketing.

Most oranges, like other citrus fruits, are consumed fresh or made into juice. The fruit and rind are also much used in marmalade, preserves, flavoring, and confections. Some varieties yield essential oils used in perfume. The flower is a favorite for bridal decoration and is the state flower of Florida. The yellow wood, which is hard and close-grained, is manufactured into small articles. 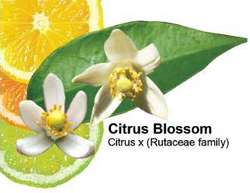 Beautifully scented waxy flowers with a citrusy lemon flavor. Don’t eat too many at one time.
Edible Plant Guide © 2012 Markus Rothkranz
The following article is from The Great Soviet Encyclopedia (1979). It might be outdated or ideologically biased.

(Citrus sinensis), an evergreen fruit tree of the genus Citrus, family Rutaceae. It is not found wild. On strongly developed rootstocks it reaches a height of 12 m; dwarf trees are 4–6 m. The leaves are leathery and oval-shaped and end in sharp points. The flowers are monoecious, white, fluffy, and single or inflorescent. The fruit is a mul-tilocular berry. Depending on the variety, oranges differ greatly in size, shape, and skin color (from light yellow to reddish orange). The pulp is juicy and sweet or bittersweet. During the vegetative period, depending on climatic conditions, there may be two or three periods of growth, each followed by a period of dormancy. Vegetation begins at a stable temperature of 10°-12°C; at lower temperatures the trees are dormant. When the temperature goes down to -6°C, the leaves die, and at temperatures from -8° to -9.5° C, the entire aboveground part of the plant dies. In favorable conditions, the orange can live and bear fruit for more than 75 years. Grafted plants begin to bear fruit three to four years after planting. Fruit is borne annually. The orange is native to southern China and Indochina. It is cultivated in the tropical and subtropical regions of many countries. In the USSR the orange is raised in a small area along the Black Sea coast of the Caucasus. In good years the harvest is 20–25 tons per hectare. The fruits contain up to 12 percent sugars, 0.6–2 percent citric acid, up to 50–65 mg percent ascorbic acid, vitamins B, and P, and salts of calcium, potassium, phosphorus, and others. Oranges are eaten fresh and processed (made into jam, candied, and so on). The skin of the fruit contains up to 2 percent essential oil, which is used in the perfume and confectionery industries. The varieties that have been regionalized in the humid subtropical regions of the USSR are Hamlin, Pervenets, Washington, navel, Korolek 100, and smooth-skinned. Plots with the warmest microclimates and well-drained soils are selected for orchards. In industrial cultivation the orange is reproduced by grafting on the trifoliate, and in tub cultivation it is grafted onto sections of the orange itself and the lemon. The wild orange (C. aurantium), sometimes called the sour orange, is related to the orange and is sometimes used as a root stock for the orange.

a city in the southern USA, in Texas. Port on the Sabine River accessible to oceangoing vessels. Population, 25,000 (1970). Orange is the center of an important rice- and vegetable-growing region. Petroleum, natural gas, and sulfur are extracted. The city has ship-building, petrochemical, canning, woodworking, and paper industries. The city exports petroleum, sulfur, rice, and lumber.

a river in Southern Africa, flowing through Lesotho, the Republic of South Africa, and Namibia. It is 1,860 km long and drains an area of 1,036,000 sq km. Originating at an elevation of 3,160 m on the slopes of Mont-aux-Sources, the river is known as the Sinqu at its source; it flows westward and empties into the Atlantic Ocean. The chief right tributaries are the Caledon and the Vaal.

In crossing the arid region of the highveld, the Orange loses part of its runoff and shrinks in size; in the dry season its channel here almost dries up, but after heavy rains the water level rises sharply. Below its confluence with the Vaal River, the Orange enters the Kaap Plateau, where it flows through a gorge. Near the southern edge of the Kalahari Desert, the river becomes very shallow. Below the mouth of the Hartebees it forms rapids and the cascades of the Aughrabies Falls, where the river plunges 146 m in the course of a few kilometers. Farther on, the Orange flows through a gorge, and for its last 97 km it flows across a plain; at the mouth it forms a sandbar.

The Orange River is fed by rain, and its regime depends on freshets. High water occurs from November to March, with peak levels in February and March; low water is in July and August. The river’s flow rate varies widely from year to year. The mean annual flow rate at Prieska is about 350 cu m per sec. Sediment discharge totals 153 million tons. The Orange is not navigable.

Several irrigation systems have been created in the river’s basin, including the Vaal-Hartz project and the one on the Riet River, a tributary of the Vaal. A 30-year project for developing water and hydroelectric resources in the Orange River system was begun in 1966. Thus far, the Hendrik Verwoerd Dam has been built (1972), and construction is under way (1974) of the P. K. le Roux Dam near Petrusville. An 82-km tunnel intended for water supply and irrigation has been constructed (1975) through a mountain ridge, from the Hendrik Verwoerd Reservoir to the upper Great Fish River. The Orange River Project calls for irrigating 308,000 ha of land and improving the water supply of the cities of Bloemfontein, Kimberley, and Port Elizabeth.

Cities on the Orange include Aliwal North, Prieska, and Upington. The river was named in honor of the Prince of Orange by the Scot R. J. Gordon, a member of a Dutch expedition.

What does it mean when you dream about an orange?

The orange is a symbol of physical health and spiritual vitality, evoking comparison with the fruit of knowledge and the luscious indulgences of the body.

[′är·inj]
(botany)
Any of various evergreen trees of the genus Citrus, cultivated for the edible fruit, a berry with an aromatic, leathery rind containing numerous oil glands.
(optics)
The hue evoked in an average observer by monochromatic radiation having a wavelength in the approximate range from 597 to 622 nanometers; however, the same sensation can be produced in a variety of other ways.
McGraw-Hill Dictionary of Scientific & Technical Terms, 6E, Copyright © 2003 by The McGraw-Hill Companies, Inc.

1. any of several citrus trees, esp Citrus sinensis (sweet orange) and the Seville orange, cultivated in warm regions for their round edible fruit See also tangerine
2.
a. the fruit of any of these trees, having a yellowish-red bitter rind and segmented juicy flesh See also navel orange
b. (as modifier): orange peel
3. the hard wood of any of these trees
4. any of several trees or herbaceous plants that resemble the orange, such as mock orange
5. any of a group of colours, such as that of the skin of an orange, that lie between red and yellow in the visible spectrum in the approximate wavelength range 620--585 nanometres

1
1. a princely family of Europe. Its possessions, originally centred in S France, passed in 1544 to the count of Nassau, who became William I of Orange and helped to found the United Provinces of the Netherlands. Since 1815 it has been the name of the reigning house of the Netherlands. It was the ruling house of Great Britain and Ireland under William III and Mary (1689--94) and under William III as sole monarch (1694--1702)
2. of or relating to the Orangemen
3. of or relating to the royal dynasty of Orange

2
1. a river in S Africa, rising in NE Lesotho and flowing generally west across the South African plateau to the Atlantic: the longest river in South Africa. Length: 2093 km (1300 miles)
2. a town in SE France: a small principality in the Middle Ages, the descendants of which formed the House of Orange. Pop.: 27 989 (1999)
Collins Discovery Encyclopedia, 1st edition © HarperCollins Publishers 2005