olive, common name for the Oleaceae, a family of trees and shrubs (including climbing forms) of warm temperate climates and of the Old World tropics, especially Asia and the East Indies. Many are popular ornamentals, particularly the lilac (Syringa), true jasmine (Jasminum), privet (Ligustrum), and forsythia genera; none of these has species native to the United States. Several indigenous species of ash (Fraxinus) are valuable for timber in North America. 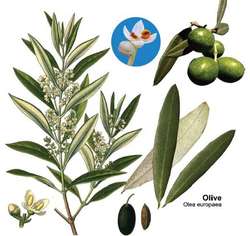 Feedback
Flashcards & Bookmarks ?
Please log in or register to use Flashcards and Bookmarks. You can also log in with
Flashcards ?
My bookmarks ?
+ Add current page to bookmarks
Mentioned in ?
References in periodicals archive ?
Priorat Natur, a small family company that produces various artisanal products in the Priorat area, showed off its extra-virgin Neus olive oil produced from Arbequina olives. The six-year-old company also produces a fine line of olives (black Empeltre, Caspe or Moron, and Arbequina), along with small, seasonal batches of honey and marmalades and jams.
Catalonia's food & wine producers court U.S. importers. (Show Notes)
Made from Arbequina olives, it is a wonderful spicy, nutty oil.
Summer Fancy Food Show, Part I. (Show Notes)
Made from 100-percent Arbequina olives from the Siurana region, the oil has an intense, fruity flavor with a slightly nutty taste.
Spain Gallery