highly exact astronomical and geodetic measurements carried out on the earth’s surface to determine the shape and size of the earth. Contemporary arc and angle measurements constitute the astronomical geodetic network which serves as the basis for topographic surveying.

The geometric foundations of arc and angle measurements go back to ancient times, when the study of the earth’s sphericity began and the practical need in astronomy, geodesy, geography, and cartography to determine the radius of the globe became apparent. The first arc and angle measurements consisted in measuring the linear length 5 of an arc of a meridian between two points A and B, and the zenith distance z at these points of some celestial object cr at the meridian (Figure 1). By correlating the linear length S of the meridian arc and the corresponding angle at the earth’s center, which is equal to the difference of the latitudes of the end points of this arc and which is determined by the formula

the length D of one degree of the arc of the earth’s meridian was determined:

from which evolved the idea of measuring the earth’s circumference in degrees or arc and angle measurements. By this method the radius R of the earth’s sphere is determined from the formula

The first determination of the earth’s radius by the arc and angle measurement method was made in 250 B.C. by the Greek scientist Eratosthenes, who lived in Egypt. Knowing that at noon on the day of the summer solstice the sun in Syene (now Aswan) illuminated the bottom of deep wells, that is, it was at its zenith, but in Alexandria it deflected from the zenith by 1/50 of a whole circle, Eratosthenes determined that the angular difference between these cities measured at the earth’s center was 7° 12’. He considered the cities to be at the same meridian and determined the distance between them from the travel time of caravans, arriving at the distance of 5,000 stadia. From here he found that the radius of the earth equals 39,790 stadia, or 6,311 km. 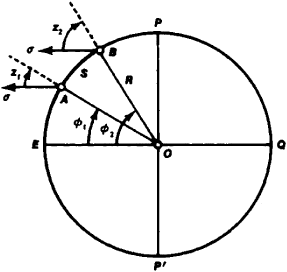 One of the next arc and angle measurements was carried out in 827 by Arab scholars on orders from Caliph al-Mamun of Baghdad on the plain between the Tigris and Euphrates rivers, at approximately 36° lat. This measurement was based on determining (I) the length of the arc by means of direct local measurements and (2) its corresponding angle at the earth’s center by measuring the meridian altitudes of the same stars at the arc’s end points. This arc and angle measurement showed that the length of one degree of a meridian arc is 112 km, which was quite an accurate result for that time.

After the development of the method of triangulation by the Dutch scientist W. Snellius in 1615–17. it became possible to measure meridian and longitudinal arcs of any length. Using this method in 1669–70, the French scientist J. Picard measured the meridian arc from Paris to Amiens. He was the first to use geodetic instruments with a telescope equipped with a reticle to measure the angles of triangulation.

During the second half of the 17th century, several facts and phenomena were discovered which gave rise to new scientific views on the shape of the earth as a planet and changed the tasks of arc and angle measurements. Thus, the French astronomer J. Richer discovered that a pendulum clock tested in Paris lost 2½ minutes a day in Cayenne, located in South America near the equator, and that it was necessary to shorten the pendulum by 3 mm to correct the clock’s operation. The English astronomer E. Halley established a similar fact on the island of St. Helena in 1677. Explaining these facts on the basis of the law of universal gravitation, I. Newton in 1680 expressed the idea that the earth was not a sphere but was somewhat flattened in the direction of its axis of rotation and resembled a spheroid. Assuming that all the particles in the earth’s mass were in a state of 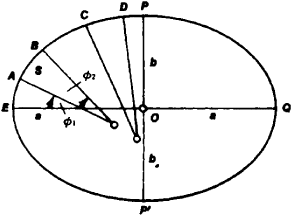 If the length of the meridian arc is determined from geodetic measurements, for example, by triangulation, and the latitudes of its end points are determined from astronomical observations, then in the preceding equation there remain two unknowns, a and a. characterizing the size of the earth’s ellipsoid. Therefore, in order to determine these unknowns it is necessary in principle only to determine the arc and angle measurements at two meridian arcs at different geographical latitudes. In reality, however, degree measurements at several meridian and parallel arcs are used for this purpose.

In order to resolve these arguments the Paris Academy of Sciences organized two expeditions on measurement to two widely varying latitudes. One expedition was sent to Peru, to the equator, and the other, to Lapland, to the Arctic Circle. The Peruvian expedition, which was led by P. Bouguer and included C. de la Condamine and L. Godin, worked from 1735 to 1742 and measured the meridian arc of approximately 3° length. The Lapland expedition under the leadership of P. de Maupertuis with A. Clairaut and the Swedish physicist A. Celsius (the originator of the temperature scale) worked in 1736–37 and measured the meridian arc of only about 1° length. The results of these expeditions and the work in arc and angle measurement by Cassini in France proved once and for all the oblate nature of the earth and the validity of the law of universal gravitation. This was of great significance for the development of geodesy and other sciences.

Between 1792 and 1797 by a decree of the revolutionary Legislative Assembly of France at the height of the French Revolution, arc and angle measurements were made from Dunkerque to Barcelona, which were significant for their time. These measurements were conducted by J. Delambre and P. Méchain and served as the basis for determining the length of the meter, by definition one ten-millionth of the meridian quadrant.

In Russia, arc and angle measurements were begun in 1816 by K. I. Tenner in the western frontier areas and by V. I. Struve in the Baltic provinces. As a result of this work, the measurement of the meridian arc from the mouth of the Danube to the shores of the Arctic Ocean, measuring 25°20’ in latitude, was completed. In the 19th century in Russia other astronomical and terrestrial work was conducted, which was later replaced by new measurements.

As arc and angle measurement records accumulated, various attempts to determine the dimensions of the earth’s ellipsoid were carried out after the beginning of the 19th century. By the middle of the 19th century significant discrepancies that could not be the result of errors in arc and angle measurements were disclosed. In an attempt to explain these discrepancies, the Russian geodesist F. F. Shubert in 1859 expressed the possibility of the triaxiality of the earth and was the first to determine the dimensions of an earth ellipsoid with three unequal axes. However, the representation of the earth as a triaxial ellipsoid did not eliminate contradictions in the results of various arc and angle measurements. From this it was concluded that the earth was not regular but had a figure, which at the suggestion of the German physicist I. Listing in 1873, was called a geoid. Since then it has been considered that the task of arc and angle measurements consists of determining the dimensions of an earth’s spheroid that most approximates the figure of a geoid and the divergence of the geoid from this spheroid. However, the study of the shape of the geoid requires data on the earth’s internal structure and involves many difficulties. To avoid these, the Soviet geodesist M. S. Molodenskii in 1945 worked out a theory and a method of determining the shape of the earth’s physical surface and external gravitational field.

New arc and angle measurements and related gravimetric work have been conducted in the USSR. The study of the earth’s shape, size, and gravitational field were carried out on a large scale. In 1940, F. N. Krasovskii and A. A. Izotov obtained extremely important data on the dimensions of the earth’s ellipsoid, which became known as the Krasovskii ellipsoid and is presently used as a model in geodetic work in the USSR and other socialist countries.

At the present time, arc and angle measurements are used primarily only to determine the dimensions of the earth. The shape of the earth and its gravitational field are determined by measuring gravity and by observing the movements of artificial earth satellites and space rockets. The data from arc and angle measurements, measurements of gravity, and observations of the movements of satellites are used jointly in simultaneously determining the earth’s shape, size, and gravitational field.

The data on the earth’s shape, size, and gravitational field are of great significance for astronomy, geodesy, cartography, and other branches of science. They have become part of astronomical and terrestrial constants and are widely utilized in calculations for launching satellites and space rockets.