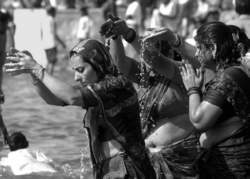 The Kumbh Mela festival recalls the Hindu story of a battle between gods and demons for the nectar of immortality known as amrita. Part of the festival involves taking ceremonial baths at one of the four cities in India where drops of amrita fell to earth. AFP/Getty Images.

In India, a story is told of ancient times in which the various supernatural beings agreed to contribute to a common task of obtaining the nectar of immortality (called amrita). They gathered a pot of the sacred substance, but some demons decided to keep the amrita for themselves and tried to run away with it. The gods pursued the demons, and a battle ensued that lasted twelve days. During this battle, drops of amrita fell on four locations, now the sites of four cities: Prayag (near the city of Allahabad, in the state of Uttar Pradesh), Hardwar (in Uttar Pradesh), Ujjain (in Madhya Pradesh), and Nasik (in Maharashtra).

Each of these four sites, located on the bank of a major river, now hosts the Kumbh Mela festival that celebrates the battle of the gods for the pots of amrita. At different times during the twelve-year cycle (symbolic of the twelve days of battle), the festival convenes in one of the four cities, the exact site and date being determined by the movement of the planet Jupiter astrologically. These gatherings, which occur approximately every three years, are the largest pilgrimage gatherings in the world, with as many as thirty million pilgrims in attendance.

The festival is marked by the presence of thousands of Hindu holy men and women designated by different names, such as monks, saints, and sadhus. The holy people are also called tirthas, which means they are seen as contact points between earthly and divine realities. They will pick a spot from which to teach and conduct teach and conductdarshan, in which disciples gather to sit in their teacher’s presence, during the early days of the festival.

The time of the Kumbh Mela includes a mélange of religious activities, although the primary activity in which most people participate is a ritual bath that is to be taken on one specific day. At the specified day at the most auspicious hour, thousands of holy men from many different Hindu sectarian groups take their ceremonial bath. Immediately thereafter, millions of festival attendees will attempt also to take their bath. The most negative aspect of the festival has been the periodic deaths of people who are trampled in the rush to the river.

The festival at Prayag is identified with the ninth-century philosopher Sankaracharaya (788–820ce). He had encouraged a gathering of holy men at the four monasteries he had established, but these were located at sites significantly remote from each other. Hence a more central location, Prawag, was chosen. During the next centuries similar riverside gatherings were originated and maintained by various lesser-known holy men. One goal of these gatherings was the creation of mutual respect and understanding of the different segments of Hinduism.

Type of Holiday: Religious (Hindu)
Date of Observation: Every twelve years on a date calculated by astrologers; next fair scheduled for 2013
Where Celebrated: Allahabad, India
Symbols and Customs: Ganges River, Kumbh, Sadhus

The Kumbh Mela, or Pitcher Fair, is part of the traditions of Hinduism, which many scholars regard as the world's oldest living religion. The word Hindu is derived from the Sanskrit term Sindhu (or Indus), which meant river. It referred to people living in the Indus valley in the Indian subcontinent.

Hinduism has no founder, one universal reality (or god) known as Brahman, many gods and goddesses (sometimes referred to as devtas), and several scriptures. Hinduism also has no priesthood or hierarchical structure similar to that seen in some other religions, such as Christianity. Hindus acknowledge the authority of a wide variety of writings, but there is no single, uniform canon. The oldest of the Hindu writings are the Vedas. The word "veda" comes from the Sanskrit word for knowledge. The Vedas, which were compiled from ancient oral traditions, contain hymns, instructions, explanations, chants for sacrifices, magical formulas, and philosophy. Another set of sacred books includes the Great Epics, which illustrate Hindu faith in practice. The Epics include the Ramayana, the Mahabharata, and the Bhagavad Gita.

The Hindu pantheon includes approximately thirty-three million gods. Some of these are held in higher esteem than others. Over all the gods, Hindus believe in one absolute high god or universal concept. This is Brahman. Although he is above all the gods, he is not worshipped in popular ceremonies because he is detached from the day-to-day affairs of the people. Brahman is impersonal. Lesser gods and goddesses (devtas) serve him. Because these are more intimately involved in the affairs of people, they are venerated as gods. The most honored god in Hinduism varies among the different Hindu sects. Although Hindu adherents practice their faith differently and venerate different deities, they share a similar view of reality and look back on a common history.

Believed to be the largest periodic gathering of human beings in the world, the Kumbh Mela or Pitcher Fair takes place every twelve years in the holy city of Prayag (now Allahabad) in north central India. It is the highpoint of a pilgrimage that also stops at Hardwar, Nasik, and Ujjain, but it is at Allahabad where the GANGES RIVER meets the Yamuna River, and where the mythical river of enlightenment, known as the Sarasvati, flows. About two million Hindu pilgrims from all over India travel here to take a dip at the confluence of the two rivers.

Why is it called the Pitcher Fair? According to legend, the Hindu gods and demons (ashuras) had been fighting for a long time, but neither could conquer the other. Both knew about a KUMBH (pitcher) filled with amrit, the nectar of immortality, that lay on the ocean floor. It was the gods, of course, who eventually found the pitcher, drank the nectar, and became immortal. But during the struggle, according to one version of the legend, drops of nectar fell at Prayag (Allahabad), Hardwar, Nasik, and Ujjain. Another version says that as the gods carried the pitcher off to heaven, they stopped at these four places. The journey took twelve days, which for the gods are much longer than earthly days-hence the twelve-year cycle on which the fair is held.

The fair that commemorates this journey has been held for centuries. A Chinese traveler in the seventh century mentioned seeing half a million Hindus gathered at Prayag, and today, of course, it is even easier for pilgrims to get there. A vast tent city is erected to house them, temporary water and power lines are installed, and ten pontoon bridges are laid across the Ganges. Movies of Hindu gods and heroes are shown from the backs of trucks, and plays recounting Hindu myths are performed. So many people attend the festival that the government often has difficulty controlling them, and tragedies cannot always be avoided. In 1954, for example, hundreds were killed or injured in a rush toward the water where the two rivers meet.

The Ganges (Ganga in Sanskrit) is not only a sacred river but is believed by Hindus to be the source of all sacred waters. The place where it joins the Yamuna at Kumbh Mela

Allahabad is called the sangam and is considered by some to be the holiest place in India; a single dip in the waters of the confluence guarantees salvation. Hardwar, where the river leaves the hills and enters the plains of Hindustan, is also an important place of pilgrimage.

Bathing in the Ganges washes away sins, and throwing the bones and ashes of the dead into the holy waters sends the deceased immediately to heaven. Many orthodox Hindus will drink no water except that of the Ganges, which is transported by a supply service to those who live far away. Because it is believed to flow on and on forever, the Ganges is a symbol of eternity.

Translated literally, kumbh means "a pot of water," but it is also an astrological sign of the zodiac that corresponds to Aquarius, the Water Bearer. Every twelve years, when Jupiter enters into the sign of Kumbh and the Kumbh Mela is held, it becomes a symbol for salvation and immortality, due to its association with the fabled jar of nectar over which the gods and the demons fought so hard.

One of the biggest attractions at the Kumbh Mela is the procession of Sadhus or holy men. Emaciated from fasting and blinded by their constant gazing at the sun, the Sadhus emerge from seclusion in the forest or mountains to appear at this festival. Their faces and bodies are smeared with ashes, and they wear only loincloths as they carry images of the gods down to the water to be immersed. Some lie on beds of spikes or swing in the air with their heads down; others use microphones to attract large crowds to their lectures. People throng the roads to see them and often break through the barriers holding them back to receive the Sadhus' blessing.

Every 12 years on a date calculated by astrologers (2013, 2025, 2037...)
The Kumbh Mela involves mass immersion rituals by Hindus near the city of Allahabad (the ancient holy city of Prayag) in the north-central state of Uttar Pradesh, India. Millions of pilgrims gather to bathe at the confluence of the Ganges and Yamuna rivers, which is also where the mythical river of enlightenment, the Saraswati, flows. The bathers wash away the sins of their past lives and pray to escape the cycle of reincarnation. Sadhus, or holy men, carry images of deities to the river for immersion, and the most ascetic sadhus, naked except for loincloths, their faces and bodies smeared with ashes, go in procession to the waters, escorting images borne on palanquins. The Ganges is not only a sacred river but is the source of all sacred waters. The junction of the three rivers at Allahabad is called the sangam and is considered by some the holiest place in India.
The mela (fair) is thought to be the largest periodic gathering of human beings in the world; a vast tent city appears, temporary water and power lines are installed, and 10 pontoon bridges are laid across the Ganges. Movies of Hindu gods and heroes are shown from the backs of trucks, and plays recounting Hindu mythology are performed. Merchants lay out all manner of goods.
The story behind the mela is that Hindu gods and asuras, or demons, fought for a kumbh, or pitcher, carrying amrit, the nectar of immortality. The god who seized the kumbh stopped at Prayag, Hardwar, Nasik, and Ujjain on his way to paradise. The journey took 12 days (which are longer than earthly days), and therefore the mela follows a 12-year cycle.
A purification bathing ceremony called the Magh Mela is also held each spring in Allahabad. It is India's biggest yearly religious bathing festival. Although the Magh Mela attracts a million people, more or less, the Kumbh Mela dwarfs it!
See also Ganga Dussehra
CONTACTS:
Uttar Pradesh Tourism Department, Directorate of Tourism
Rajarshi Purshottam Das Tandon Paryatan Bhavan
Vipin Khand, Gomti Nagar
Lucknow, Uttar Pradesh C-13 India
91-522-2308916; fax: 91-522-2308937
www.up-tourism.com
Ministry of Tourism, Government of India
Rm. No 123, Transport Bhawan, No. 1, Parliament St.
New Delhi, Delhi 110 001 India
91-11-23715084; fax: 91-11-23715084
www.tourisminindia.com
SOURCES:
DictWrldRel-1989, p. 305
HolSymbols-2009, p. 456
RelHolCal-2004, p. 186
Holidays, Festivals, and Celebrations of the World Dictionary, Fourth Edition. © 2010 by Omnigraphics, Inc.