area, measure of the size of a surface region, usually expressed in units that are the square of linear units, e.g., square feet or square meters. In elementary geometry, formulas for the areas of the simple plane figures and the surface areas of simple solids are derived from the linear dimensions of these figures. Examples are given in the table entitled Formulas for Various Areas. The areas of irregular figures, plane or solid, can be computed or closely approximated by the use of integral calculus. 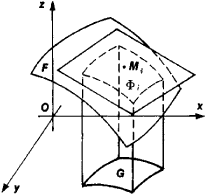 [′er·ē·ə]
(computer science)
A section of a computer memory assigned by a computer program or by the hardware to hold data of a particular type.
(mathematics)
A measure of the size of a two-dimensional surface, or of a region on such a surface.
McGraw-Hill Dictionary of Scientific & Technical Terms, 6E, Copyright © 2003 by The McGraw-Hill Companies, Inc.

1. Measurement of surface within specified boundaries.
2. Space either within or outside a structure or location, designated for a specific purpose, as recreation and/or parking area.
3. An uninterrupted interior space.
4. An areaway.
5. The cross-sectional area of steel reinforcement.
McGraw-Hill Dictionary of Architecture and Construction. Copyright © 2003 by McGraw-Hill Companies, Inc.

1.
a. the extent of a two-dimensional surface enclosed within a specified boundary or geometric figure
b. the two-dimensional extent of the surface of a solid, or of some part thereof, esp one bounded by a closed curve
2. Anatomy any of the various regions of the cerebral cortex
3. Computing any part of a computer memory assigned to store data of a specified type
Collins Discovery Encyclopedia, 1st edition © HarperCollins Publishers 2005

Feedback
Flashcards & Bookmarks ?
Please log in or register to use Flashcards and Bookmarks. You can also log in with
Flashcards ?
My bookmarks ?
+ Add current page to bookmarks
Mentioned in ?
References in periodicals archive ?
Area Under the Curve of Finger Photoplethysmography as an Evaluation Measure for Sympathetic Activity During Lumbar Epidural Anaesthesia.
Area Under the Curve of Finger Photoplethysmography as an Evaluation Measure for Sympathetic Activity During Lumbar Epidural Anaesthesia/Lumbar Epidural Anestezi Boyunca Sempatik Aktivitenin Degerlendirilmesi Icin Kullanilan Parmak Fotopletismografisinin Egri Alti Alan Hesaplamasi
The z-score table indicates that this would contain 48% on each side or 96% of total area under the curve. The appraiser would report a confidence level of 96% that the value range was between $900,000 and $1,100,000.
Adding value to valuation with confidence
Area under the curve (ug.h/ml) of meloxicam in dogs following oral administration at dose of 0.2 mg.kg -1 bwt (n-8)
ABSOLUTE BIOAVAILABILITY OF ORAL MELOXICAM IN HEALTHY DOGS
By analyzing the area under the curves (total heat), the two profiles are essentially equivalent, A = 7392.
Comparing ambient temperature profiles: why no two are created equal
The area under the curve y = 1/x from x = 1 to x = a measures A = 1 when a = e.
Demonstrating e using areas under curves
Although the study was not powered for efficacy, the highest dose cohort of CA-008 showed statistically significant and clinically meaningful (greater than 50%) reductions in area under the curve for pain intensity compared to the control group lasting up to 168 hours.
Concentric Analgesics Phase 1b Clinical Trial of CA-008 in Post-Surgical Pain Demonstrates Safety and Pain Reduction
According to the company, the primary endpoint of the SD-002 study is the evaluation of the effect of BTI-320 compared to placebo in the area under the curve (AUC) of glucose and secondarily, on insulin levels in the blood for four hours following intake of the meal.
Boston Therapeutics concludes enrollment of Type 2 diabetes patients in Phase IIb Study of BTI-320 in the US
The receiver operating curve--calculated to assess the test's ability to classify skin lesions--had an area under the curve of 95.3%.
Infrared detector distinguished malignant, benign skin lesions
In a randomized trial of 60 women who used subcutaneous drug delivery, the area under the curve for postoperative pain scores while sitting was roughly 30% less and supplemental opioid requirements were roughly 40% less when the nonsteroidal anti-inflammatory drug ketorolac was added to bupivacaine.
Drug combination improved local analgesia after cesarean
One of the two coprimary end points, the contribution of F10 to the MF400/F10 combination at week 13, was reached with a statistically significant 109-mL difference in [FEV.sub.1], area under the curve, compared with MF 400 alone.
Treatment combo beneficial in moderate to severe COPD
Area under the curve for plasma MGO was significantly (P < .05) smaller with the supplementation of g-tocopherol than without (area under the curve (0-180 min), -778[+ or -]1010 vs.
G-tocopherol abolishes postprandial increases in plasma methylglyoxal following an oral dose of glucose in healthy, college-aged men
Secondary end points included maximum percent fall in [FEV.sub.1] after the 24-hour postdose challenge and each of the following end points at 2 and 24 hours post dose: maximum percent fall in [FEV.sub.1] categorized as less than 10%, 10%-20%, and greater than 20%; area under the curve during the 60 minutes post challenge; and time to recovery to within 5% of preexercise baseline.
Montelukast tablet attenuates bronchospasm