Also found in: Dictionary, Thesaurus, Medical.
Related to Aromatic Compounds: Aliphatic Compounds
The following article is from The Great Soviet Encyclopedia (1979). It might be outdated or ideologically biased.

a class of organic cyclic compounds in which all the atoms participate in forming a single conjugated system; the π-electrons of this system form a stable, or interlocking electron cloud (shell).

The term “aromatic compound” came into use because the first representatives of this class to be discovered and studied had pleasant odors. The simplest aromatic compound is benzene (I). Naphthalene (II), anthracene (III), phenanthrene (IV), and other compounds containing condensed benzene rings, as well as various derivatives, belong to the class known as aromatics. 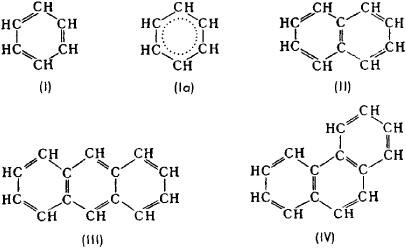 Aromatic compounds are designated a special class for a number of reasons. Benzene, C6H6, which formally contains three double bonds, should have the same properties as a highly unsaturated compound. But benzene and other aromatic compounds are not altered when treated with cold potassium permanganate, nor do they add bromine as do olefins containing double bonds. A characteristic of aromatics is the ready substitution of hydrogen atoms attached to carbon atoms of the benzene ring when aromatics are treated with various electrophilic reagents. Thus, treating benzene with nitric acid yields nitrobenzene:

Analogous processes of electrophilic substitution occur during sulfonation, halegonation, and acetylation of aromatic compounds, which react more like saturated than unsaturated compounds. It should be kept in mind, however, that the ease of substitution reactions and the difficulty of addition reactions has only a quantitative character. At certain conditions, benzene adds three molecules of chlorine to form hexachlorocyclohexane, C6H6Cl6; hydrogenation of naphthalene results in the addition of five molecules of hydrogen to yield decahydronaphthalene.

Aromatic compounds are very stable; they are formed from other classes under severe conditions. Thus benzene can be formed by treating acetylene with activated carbon at 650°C; it is also formed in the dehydrogenation (“aromatization”) of cyclohexane (V).

Aromatic compounds are extremely numerous and have practical significance. Thus, aromatic nitro compounds, sulfonic acids, phenols, and amines are intermediates in the synthesis of many dyes and pharmaceuticals. Phenols, styrene, and terephthalic acid are used in synthesizing polymers. The explosive trinitrotoluene is derived from toluene.

The special characteristics of this class of compounds can be explained by the fact that aromatics do not actually contain alternating single and double bonds; all bonds in benzene are equal and completely uniform. The distances between carbon atoms in benzene (1.4 angstroms [Å]) are between the interatomic distances for single (1.54Å) and double (1.34 Å) bonds. Therefore the preferred representation of the structure of benzene is not the usual formula (I) but (Ia). In benzene and other aromatic compounds it is characteristic for the π-electrons to form a stable, closed electron shell (cloud).

Later it was found that many other nonbenzene compounds have characteristics similar to aromatic compounds. The unsaturated five-member heterocyclics like furan, thiophene, and pyrrole are among the most important. Six-member heterocyclics such as pyridine also have properties of aromatics.

Also known are aromatic nonbenzene compounds whose skeleton is composed only of carbon atoms; to this class belong such stable organic ions as the cation of tropylium (VI), the anion of cyclopentadiene (VII), and dipolar compounds like azulenes (VIII) and others. Several inorganic compounds like borazole (IX) and phos-phonitrile chloride (X) have properties of aromatics. Comparative aromaticity of benzene and nonbenzene compounds as manifest in a compound’s ability to take part in elec-trophilic substitution reactions, corresponds to the series: anion VII > pyrrole > benzene → pyridine > tropylium. The ability of a compound to take part in nucleophilic substitution reactions changes in the reverse order.

Feedback
Flashcards & Bookmarks ?
Please log in or register to use Flashcards and Bookmarks. You can also log in with
Flashcards ?
My bookmarks ?
+ Add current page to bookmarks
Mentioned in ?
References in periodicals archive ?
What (if any) aromatic compounds are being altered to explain this purported effect remains to be determined.
Managing Green Flavors in the Winery: Sorting, clarification and heat treatments are among the most successful options
The small absorptions due to aromatic compounds are not possible to be observed in this absorption region.
Fluorescence Spectroscopy Applied in the Identification of Lubricant Oils
suggested that exposure to the heavy metals in aromatic compounds may lead to ineffective erythropoiesis as a consequence of its suppressive activity on the bone marrow [6].
Reduced Haematopoietic Output in Automobile Mechanics and Sprayers with Chronic Exposure to Petrochemicals: A Case-Control Study in Cape Coast, Ghana
Graham, "The detection of polycyclic aromatic compounds in air samples by GCxGC-TOFMS," Polycyclic Aromatic Compounds, vol.
Analysis of Polycyclic Aromatic Hydrocarbons in Ambient Aerosols by Using One-Dimensional and Comprehensive Two-Dimensional Gas Chromatography Combined with Mass Spectrometric Method: A Comparative Study
C1Fd strain was isolated from a rumen fluid derived bacterial consortium degrading different aromatic compounds. Macroscopic nature of the colony and microscopic characteristics of the isolated bacterial strain is shown in Table I.
Anaerobic biodegradation of polyaromatic hydrocarbons by a sulfate reducing bacteria C1Fd strain
The members of this group (besides Azoarcus and Thauera genera) are such denitrificans which are able to degrade aromatic compounds [17].
Biofilm Forming Bacteria during Thermal Water Reinjection
The high content of aliphatic hydrocarbons and low content of aromatic compounds reveal that the skeletal structure of oil shale kerogen is mainly composed of long-chain aliphatic alkyls and few aromatic rings.
Characterization of Dachengzi oil shale fast pyrolysis by Curie-point pyrolysis-GC-MS
Yeast that made the aromatic compounds were transported around the plate four times as often as the scentless mutants were.
Yeast use scents to entice fruit flies: the fungal cells can hitch a ride on the insects to get around
The major compounds were chromone derivative aromatic compounds sesquiterpenes monoterpenes sterols and fatty acid methyl ester.
Gas Chromatography-Mass Spectrometry Analysis of Agarwood Extracts from Mature and Juvenile Aquilaria malaccensis
Due to the Rxi[R]-35Sil MS column's selectivity for aromatic compounds, CBC and CBD were completely separated and could be accurately integrated and reported individually.
Don't overestimate cannabidiol during medical cannabis potency testing by gas chromatography
Kaneka and RIKEN's Numata tried to synthesize PHA through biosynthesis by many microorganisms with a sole carbon source of aromatic compounds that make up lignin or similar aromatic compounds.
Kaneka, RIKEN Synthesize Bioplastic from Non-food Plant Resources
Each strain produces different amounts of aromatic compounds, besides that the fermentations can be carried out in pure or mixed culture.
Saccharomyces cerevisiae mixed culture of blackberry (Rubus ulmifolius L.) juice: synergism in the aroma compounds production