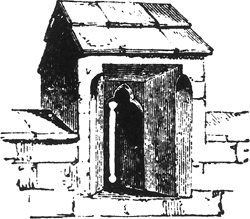 arrow loop
A vertical slit for archers in medieval fortification walls, with jambs deeply splayed toward the interior.
McGraw-Hill Dictionary of Architecture and Construction. Copyright © 2003 by McGraw-Hill Companies, Inc.

Feedback
Flashcards & Bookmarks ?
Please log in or register to use Flashcards and Bookmarks. You can also log in with
Flashcards ?
My bookmarks ?
+ Add current page to bookmarks
References in periodicals archive ?
The former stable block is now a bistro area but there is still an arrowslit window where defenders of the castle would have been able to fire their bows at attackers.
BE KING OF THIS CASTLE; It's seen a lot in its time, but Otterburn Castle is looking to the future. IAN ROBSON takes a tour..
This hexagonal room at the heart of the castle truly took us back in time as we banqueted on sumptuous modern dishes by candlelight next to arrowslit windows.
Medieval and d magnificent; Truly enchanted by fairytale stay at Thornbury Castle where Henry VIII wooed Anne Boleyn: TheGreat Escape
The castle theme of the interior is echoed to the main facade, some modest extension to the front distinctive for some battlement detailing, an arched window and a hit at an arrowslit in the gable.
Rural setting but not remote
Encyclopedia browser ?
Full browser ?
CITE
Site: Follow: Share:
Open / Close