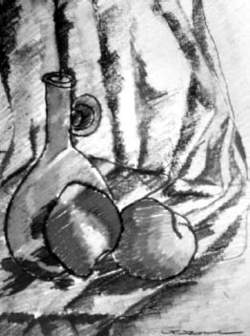 An aspect of automatic writing, automatic art is produced with the medium unaware of what is being painted. In this instance the “medium” is not necessarily a professional (although in fact we all have mediumistic abilities latent within us). Just as virtually anyone can operate a talking board, so can anyone do automatic writing, drawing and painting. Some people go into trance when doing automatic art, but most remain fully conscious, if unaware of what it is their hand is about to reveal.

Some automatists are not aware that their hands are moving and are surprised when they see the results of their unconscious actions. Others are aware but feel that they have absolutely no control over what is being drawn or painted. Just as automatic writing is often produced at incredibly high speed—far faster than one could normally write—so is automatic art produced that way by many of its practitioners. Heinrich Nusslein, a German automatic artist, painted in total darkness, producing small pictures in three or four minutes, totaling 2,000 pictures in two years. In the late nineteenth century Marjan Gruzewski of Poland and David Duguid of Glasgow, Scotland, also painted in total darkness. John Ballou Newbrough, the automatist who produced Oahspe, was also an automatic artist who could paint with both hands at once in total darkness. Susannah Harris would complete an oil painting in two hours when blindfolded and painting it upside down. Augustine Lesage painted from the top of the canvas working his way down. A Captain Bartlett similarly produced detailed architectural drawings of Glastonbury Abbey, as it was originally, working from the top left hand corner and coming down, giving verified archeological details with incredible precision.

Emily A Tallmadge, of New York City (who died in 1956 at the age of 82), produced thousands of intricate drawings and paintings, many of them done with colored pencils. Most were similar to mandalas. She claimed that they were inspired by her spirit guides. Of the thousands she produced, no two were the same. Automatic drawing does not always develop into automatic painting. Generally, the painting seems to develop independently.

Toward the end of the nineteenth century observation of hysterical and brain-damaged patients indicated that some people could exhibit unusual artistic talent that they did not have in their normal state. The Spiritualist community therefore decided that true automatic writing and art should show some evidence of connection to the spirit world. In other words, a piece of writing or art should in some way reveal correct information that was not previously known to the entranced artist, be it unknown information of a spirit or of the artist him or herself. Alan Gauld (Man, Myth & Magic: Automatic Art, 1970) gives the example of Frederic L. Thompson, a goldsmith who in 1905 felt a strong urge to paint a series of pictures of trees and landscapes. In 1906 he happened to go to an exhibit of paintings by the recently deceased Robert Swain Gifford (1840—1905). Most of these paintings were landscapes and pictures of trees. While there, Thompson heard in his head the voice of Gifford telling him to, “take up and finish my work.” He seemed to do just that. He produced a large number of paintings that turned out to be not copies of Gifford’s works but exact renderings of actual scenes that had been known to the dead painter. So similar were the paintings that it seemed they were scenes that Gifford would have painted had he lived. Yet Thompson had never actually visited these places and had only seen the scenes in his head.

In 1978 a Brazilian artist named Luiz Antonio Gasparetto appeared on television and in 75 minutes produced 21 paintings. He worked in trance and sometimes worked with both hands at the same time. The paintings were varied, being done in the vastly different and distinctive styles of Toulouse-Lautrec, Degas, Gaugin, Modigliani and Renoir. British automatic artist Matthew Manning began producing similar work in the 1970s when only in his teens. He did not go into trance but simply watched his hands producing drawings and paintings as though from the hands of Picasso, Aubrey Beardsley, Paul Klee, Albrecht Dürer, and Leonado da Vinci, among others.

Feedback
Flashcards & Bookmarks ?
Please log in or register to use Flashcards and Bookmarks. You can also log in with
Flashcards ?
My bookmarks ?
+ Add current page to bookmarks
Mentioned in ?
References in periodicals archive ?
The state of the art, automatic tank cleaning system will eradicate industry fatalities in the British Isles, eliminating human exposure to confined spaces
Re-Gen Robotics launches new firm