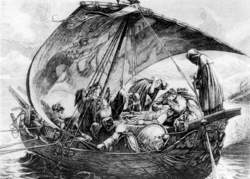 Engraving depicting the death of King Arthur, based on an 1869 painting by Joseph Noel Patton. Fortean Picture Library.

The stories of King Arthur and the Knights of the Round Table can be read on many levels. They are, at the very least, entertaining adventure tales. On a deeper level, they are a rich mythological source, examining the depths of human nature from ancient Celtic myth to medieval Christian values. Certainly there are those who read them to discover more about what was going in the historical period in which they were written. But fascinating insights can also be derived by reading them from a religious perspective.

Arthur is portrayed as a hinge between two worlds. Assisted by the wizard Merlin, who is perhaps a Druid, Arthur stands as the last of the pagan kings, but with a foot in the Christian world as well. Seen in this light, the Arthurian legend is the story of all the gods becoming one God, of pagan Europe being transformed to Christianity. When young Arthur draws Excalibur from the stone, he is freeing the source of magic from the dark, hard places of the earth and exposing them to work in the air and light of day. He never really becomes a Christian, however, so at his death the sword, having done its work, is returned to the Lady of the Lake, the goddess. The sword is represented now by the many pagan customs "baptized" or adapted and wielded by Christianity. Easter celebrations, bunnies and eggs, Christmas trees and lights— all are examples of Excalibur, still flashing in the light of triumphant Christianity. But rest assured, the legend reminds us, that when the male God of Christianity has done his work, the sword will be returned to its rightful owner, the goddess, who has been the real source of power all along.

In the fifth century, Rome was pressured to draw its legions back from England to protect itself from the Barbarian hordes nipping away at its borders. The Pax Romana, or Peace of Rome, was removed. It had been a peace enforced by the sword, but a peace nevertheless. The crust of Roman civilization in Britain began to crumble under invasion from without and rebellion from within. Christianity had been the official religion of Rome, but it had never managed to eliminate the pagan religion that had been at the heart of the people of Britain, who now looked for protection so they could plow their fields and support their families. They needed leadership. But they were also searching for spiritual nourishment. Many had adopted the new religion but would not forsake the old. The shrines of roadside gods still held peasant offerings. Christian bishops battled pagan priests for the soul of Britain, and both needed political protection from Saxon ships pillaging their shores.

This is the drama into which Arthur, if he ever lived at all, was born. His birth and ascension were magical. Merlin, the mysterious, shadowy background figure, seems to be at home in both mystical Avalon and the castle of Camelot, a Druid who has elements of Mithras, the soldier's god, and Christ. He is, of course, suspected by all and accepted by none but Arthur, but his magic and insight guide the young king to establish, for a short time, an empire open to all.

By the time of the Middle Ages the stories take on a distinctly Christian aura with the Grail legends. The Holy Grail was the cup from which Jesus drank at the Last Supper. Brought to England, some say by angels, others by Joseph of Arimathea, it was hidden away, to be found only by the pure of heart.

At this point it is important to remember that the Grail legend predates Christianity by centuries. Celtic lore refers to several magic cauldrons that heroes undergo quests to find. It was another pagan myth that, like the Christmas tree, the Easter bunny, and the Yule Log, was "baptized" by the church to incorporate pagan customs the people refused to abandon.

But to study the Grail legends is to delve into the very heart of religion and human psychology. Galahad, who achieved the quest, becomes a study of purity and noble purpose. Thirteenth-century German poet Wolfram von Eschenbach's Parzival discovers the Fisher King (keeper of the Holy Grail), drinks from the Grail, and becomes the Grail King himself. When he is baptized by its water, an inscription appears on the cup: "If any member of this community should, by the grace of God, become the ruler of an alien people, let him see to it that they are given their rights."

Joseph Campbell believes this to be the first time in history that such a thought was expressed. The idea that a king must rule in the name of his people, rather than in his own name, didn't come to fruition until the signing of the Magna Carta in 1215.

When Parzival meets a hermit he is told, "You, through your tenacity of purpose, have changed God's law." The idea of a human being wrestling with God and winning is new to Christianity, although the Hebrew Bible tells the story going back all the way to Jacob in the book of Genesis.

We see here the concept of evolving religion. Paganism is enveloped by Christianity. Christianity adapts to the importance of the individual over the divine right of feudal lords.

This idea is captured beautifully by Mary Stewart in her recent series of books based on the legend of Merlin. In the final scene of The Hollow Hills, Arthur has drawn the sword from the stone and Merlin is left alone where magic fire has scoured the pagan altar. Merlin speaks:

I carried the nine lamps out of the chapel. Come daylight, I would take them where they now belonged, up to the caves of the hollow hills, where their gods had gone... my sight blurred and darkened as if still blind with vision, or with tears.... The tears showed me the altar now, bare of the nine-fold light that had pleasured the old, small gods; bare of the soldier's sword and the name of the soldier's god. All it held now was the hilt of the sword standing in the stone like a cross, and the letters still deep and distinct above it: TO HIM UNCONQUERED.

Arthur, asteroid 2,597 (the 2,597th asteroid to be discovered, on August 8, 1980), is approximately 20 kilometers in diameter and has an orbital period of 5.2 years. Arthur was named after the semi-mythic king of England. The Celtic artos means “bear.” According to J. Lee Lehman, the person in whose natal chart this asteroid is prominent is a “hero who presides. The heroic nature of this asteroid comes from properly executing the duty of assigning someone else the job of the quest.” Jacob Schwartz gives the astrological significance of Arthur as “heroism and cleverness, and delegating authority, with support from the public.”

1. a legendary king of the Britons in the sixth century ad, who led Celtic resistance against the Saxons: possibly based on a historical figure; represented as leader of the Knights of the Round Table at Camelot
2. Chester Alan. 1830--86, 21st president of the US (1881--85)
Collins Discovery Encyclopedia, 1st edition © HarperCollins Publishers 2005

Feedback
Flashcards & Bookmarks ?
Please log in or register to use Flashcards and Bookmarks. You can also log in with
Flashcards ?
My bookmarks ?
+ Add current page to bookmarks
Mentioned in ?
References in periodicals archive ?
Arthurian will assist the company in this expansion, and ultimately into the Middle East, North Africa and the Far East.
First US firm attracted TOWALES by tech fund
"A very strong deal flow pipeline has already built up but the Arthurian board welcomes all Welsh life sciences companies - or those outside but wishing to relocate and establish activities in Wales - to make contact and present their case for funding.
PS100m backing for Wales' life science sector; Entrepreneur manages fund
Arthurian material was found in the 'gretebokes' owned by gentry families, along with 'chivalry, courtesy, governance and history' (p.
The Gentry Context for Malory's 'Morte Darthur'
``It was something which grew and it has always fascinated me,'' she saidAfter graduating she moved to university in Manchester gaining a PhD in Arthurian literature.
Make the most of your Arthurian links
Baghdad is an obvious player, while Arthurian Fame, Byron Flyer and Aquarium are others to throw into the mix.
NEWSBOY'S 1-2-3 1 CORGI 2 [...]
The Duke of Edinburgh Handicap is now on the agenda for the rapidly improving Arthurian Fame, who is unbeaten since being bought by the Blackrock Racing Syndicate - an ownership that consists of 62 past-pupils of Blackrock College in south Dublin.
Royal Ascot the next stop for 62-member Blackrock syndicate
A well-attended launch was hosted by Bangor University's Centre for Arthurian Studies, a hub for international research in Arthurian Studies, and follows a symposium on the same topic held at Bangor University last year.
Exposing Celtic roots of Arthur
Running Knights, a re-working of the Arthurian legend
College worker pens sequel to debut novel
Enhanced with the inclusion of a listing of 'Dates, Names, and Time Line of Significant Events'; an appendix (The Sovereign's Chair); fifteen pages of Notes; a fifteen page Bibliography; a one page listing of Arthurian Societies & Resources, and a ten page Index, "The Complete King Arthur" is an extraordinary and seminal work of exhaustively researched scholarship.
The Complete King Arthur: Many Faces, One Hero
This new edition offers an excellent collection of Joseph Campbell's lectures and papers on Arthurian myth and literature.
Romance of the Grail: The Magic and Mystery of Arthurian Myth
Sir Chris said: "We at Arthurian are delighted with the scale and quality of this excellent transaction as it brings together several of the world's top biotech investors, primarily from the US, to back one of WLSF's most ambitious drug development companies.
Pharma firm successful in raising new funding
Critique: An inherently fascinating and thoroughly absorbing read, "Romance of the Grail: The Magic and Mystery of Arthurian Myth" is a 'must read' for the legions of Joseph Campbell fans and will aptly serve as an introduction for the non-specialist reader with an interest in Arthurian mythology.
Romance of the Grail: The Magic and Mystery of Arthurian Myth