During launches of artificial lunar satellites, the final stage of the launch vehicle is first inserted into earth satellite orbit and is then injected into translunar trajectory by an additional burn of its rocket engine. The speed of the spacecraft during launch from earth orbit is somewhat less than parabolic velocity; it corresponds to an elongated ellipse whose apogee reaches the orbit of the moon or lies beyond it. The absolute minimum orbital launch speed at an altitude of 200 km is about 10.92 km/sec (parabolic velocity at this altitude is 11.015 km/sec). Flight time to the closest region of circumlunar space in this case is about 4.74 days. For launch speeds of 10.93 and 10.96 km/sec the flight time is about 3.5 and 2.6 days, respectively. At a distance of about 66,000 km from the center of the moon, a spacecraft enters the lunar field of gravitational influence. In the case of fly-by trajectories the selenocentric velocity of the spacecraft relative to the moon at the edge of the field is not less than 0.8 km/sec, which considerably exceeds the parabolic velocity for the moon at this distance (0.38 km/sec). Under such conditions, in the case of uncontrolled motion, the spacecraft swings around the moon, moving along a hyperbola relative to it, and then leaves the moon’s field of influence and returns to earth. For a spacecraft lo enter lunar orbit, the on-board rocket engine, which imparts a braking thrust to it, is fired for a short time by a command from earth (see Figure 1).

where R is the radius of the moon (1,738 km). The selenocentric parabolic velocity at a distance r from the center of the moon is equal to 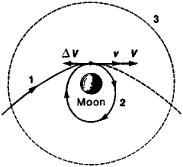 Considerable perturbations in the motion of low-flying artificial lunar satellites (several hundred kilometers above the lunar surface) are caused mainly by the noncentral character of the moon’s gravitational field, which results from the complex shape of the moon and the uneven distribution of matter within it; lesser perturbations are the result of the gravitational influence of earth and sun. The almost periodic changes in the shape of an orbit, as well as changes in the altitudes of the perilune and the apolune, are the main result of these orbital perturbations: the perilune gradually decreases, and the satellite falls toward the moon.

The first artificial lunar satellite, the Soviet Luna 10 space probe, had a speed of 10.87 km/sec at the beginning of its translunar trajectory (at an altitude of about 270 km ibove the earth). Swinging around the moon 3.5 days later at a minimum distance of about 1,000 km from the lunar surface, the probe had a selenocentric velocity of about 2.1 km/sec. A braking burn reduced the spacecraft’s speed to 1.25 km/sec, and it went into lunar orbit with an apolune of 1,017 km and a perilune of 350 km. The inclination of the satellite’s orbit to the moon’s equator was 71°54’. The active period in the life of Luna 10, during which on-board instrument readings were transmitted to earth and trajectory measurements were made, lasted from Apr. 3 to May 30, 1966. In this time the satellite made 460 revolutions around the moon. As a result of orbital perturbations the perilune increased to 378.7 km and the apolune decreased to 985.3 km; the perturbations caused by the noncentral character of the moon’s gravitational field exceeded by a factor of 5–6 those resulting from terrestrial gravitation, and the latter in turn exceeded the perturbations caused by the sun by a factor of 180. Theoretical calculations indicated that in 6.5 months the perilune would reach 2,150 km from the center of the moon and then begin to decrease in such a way that the spacecraft would impact on the lunar surface in 2.5 years.

Five Soviet and five American artificial lunar satellites (the Luna and Lunar Orbiter series, respectively) were launched from 1966 to 1969. The goals of these launches included the firsthand study of the properties of the lunar surface and circumlunar space with the aid of on-board scientific equipment, as well as the photographing of the lunar surface; and the study of the lunar gravitational field and of the peculiarities of the moon’s shape and internal structure that define the field, as well as the more exact determination of the moon’s mass by means of trajectory measurements and analysis of perturbations of the orbits of artificial lunar satellites. The Luna 10 satellite was equipped with spectrometers for the study of gamma and infrared radiation emanating from lunar rock on the surface, an instrument for recording streams of cosmic rays and charged particles from the sun, a device for recording meteor particles in circumlunar space, and an instrument for detecting the moon’s magnetic field. The Luna 11 satellite was also equipped with radio astronomic instruments for studying long-wave cosmic radio emissions; and Luna 12 had television cameras that took close-up pictures of the lunar surface and transmitted them to earth (the smallest discernible details were 15–20 m in diameter).

Preliminary analysis of orbital perturbations has shown that either the moon is pear-shaped, with a bulge on its far side, or the density of matter inside the moon is greater on its far side (previously it had been considered that the moon was pear-shaped but bulged toward the earth). The Lunar Orbiters were used mainly for photographing the lunar surface, specifically for choosing landing sites suitable for the Apollo spacecraft. The analysis of perturbational variations in the orbits of these satellites has also made possible the establishment of the existence on the moon of subsurface areas with considerable concentrations of mass (they have come to be called masscons—an abbreviation of “mass concentration”), whose effects resulted in additional perilune variations on the order of 5–10 km.

To obtain comprehensive data about various areas of circumlunar space and the lunar surface, artificial lunar satellites are launched into orbits with various perilunes, apolunes, and angles of inclination. In some cases they are maneuvered using an onboard propulsion system. Spacecraft intended for a soft landing are initially placed in lunar orbit; such orbits are called parking orbits. The Soviet Luna 16 spacecraft was first injected into a circular selenocentric orbit at an altitude of about 110 km. In three days, after two maneuvers, it was injected into an elliptical orbit with a perilune of 15 km and an apolune of 106 km; it was subsequently shifted to a descent and landing trajectory. A spacecraft in lunar orbit may also be shifted to an earth-return path by means of an acceleration thrust. For the return flight from the moon the American Apollo 11, Apollo 12, and Apollo 14 spacecraft were first inserted into lunar parking orbits and then shifted to-earth-return paths.