system in which inherited symbols, or devices, called charges are displayed on a shield, or escutcheon, for the purpose of identifying individuals or families. In the Middle Ages the herald, often a tournament official, had to recognize men by their shields; thus he became an authority on personal and family insignia. As earlier functions of the herald grew obsolete, his chief duties became the devising, inscribing, and granting of armorial bearings. The use of personal and family insignia is ancient (it is mentioned by Homer), but heraldry proper is a feudal institution developed by noblemen using personal insignia on seals and shields that came to be transmitted to their families. It is thought to have originated in the late 12th cent., and to have been prevalent in Germany, France, Spain, and Italy, and imported into England by the Normans. The crusades and tournaments which drew together knights from many countries caused heraldry to flourish in Western Europe and the Muslim world. The practice of embroidering family emblems on the surcoat, or tabard, worn over chain mail in the 13th cent. accounts for the term "coat of arms." The use of armorial bearings spread rapidly thereafter through all grades of feudal rank above squire. Private assumption of arms became so common that Henry V forbade it, and on the chartering of the Heralds' College in 1483 the regulations pertaining to heraldry were placed in the hands of the Garter King-of-Arms. Arms were borne by families, corporations, guilds, religious houses, inns of court, colleges, boroughs and cities, and kingdoms. In the United States the seals and insignia of colleges, cities, and the like are examples of the persistence of the heraldic tradition. For methods and conventions of displaying armorial bearings, see blazonryblazonry
, science of describing or depicting armorial bearings. The introduction, since the Middle Ages, of artificial rules and fanciful medieval terms has complicated the science, particularly in England.
..... Click the link for more information. .

an auxiliary historical discipline that studies coats of arms as specific source material.

Heraldry plays an important role in determining the origins of historical memorabilia that are furnished with coats of arms. It aids in the establishment of the authenticity, ownership, authorship, place of origin, and dating of objects of daily life, works of art, books, and manuscripts, and it also facilitates the determination of the scope and value of property, the establishment of the lines of inheritance, and the clarification of economic and cultural relationships. Heraldry is connected with genealogy, with numismatics, paleography, and sphragistics. The data of heraldry are used in various branches of historical scholarship.

Heraldry originated from the custom of announcing before the beginning of a tournament the design of a knight’s coat of arms as proof of his right to participate in the competition. Those who created these heraldic coats of arms were called heralds. The early works on heraldry—verses and narrative poems by poet-heralds—appeared during the second half of the 13th century. The oldest book of heraldry, the Züricher Wappenrolle, 1320, and the first exposition of heraldic regulations by the Italian jurist Bartolus date to the first half of the 14th century. With the formation of a class-based monarchy, practical heraldry acquired a state character. The right to grant and confirm coats of arms became the exclusive privilege of kings, and the charter of the coat of arms was introduced (for the first time in Germany during the 15th century); this was an official certificate of the right to use the coat of arms depicted and described therin. A specific tax was established for confirmation of the coat of arms (droit de recherche), and a fine was levied for the use of an unconfirmed coat of arms. Under the absolutist monarchies, special departments headed by the master of heralds were set up at royal courts (for example, France, 1696, and Prussia, 1706). ’During the 16th to 18th centuries the theory of heraldry was developed and systematized by heraldic scholars. The first department of heraldry was established in Berlin in 1706. With the decline of feudalism, heraldry lost its practical importance. The scholarly study of heraldry as an auxiliary historical discipline began during the second half of the 19th century.

In Russia, heraldry was borrowed from the West during the second half of the 17th century and immediately acquired an official state significance. The first few Russian works in the field were books of heraldry that had as their goal the establishment of a high position for the Russian tsar among the European monarchs: the Book of Titles (1672), a work by L. Kurelich concerning the family relationship between the Russian monarch and those of Europe (1673), and the Book On the Genealogy and Coats of Arms of Some Famous Russian Noble Families (1686-87), the manuscript of which has not been preserved. By a decree of Peter I in 1722, the office of the master of heralds was established under jurisdiction of the Senate, and in 1726 a subdepartment of heraldry was established at the St. Petersburg Academy of Sciences. In 1797 work was initiated on compiling the General Book of Heraldry for the Noble Families of the Russian Empire. (By 1917, 20 volumes had been completed, in which were registered about 5,000 coats of arms of the nobility.) Original theoretical works on heraldry in Russia began appearing in the middle of the 19th century (such as Russian Heraldry by A. B. Lakier, 1855). At the end of the 19th century and beginning of the 20th, articles and books on heraldry were published by P. P. Vinkler, N. Shaposhnikov, V. Belinskii, and S. P. Troinitskii. There were departments of heraldry in the Moscow and St. Petersburg Archaeological Institutes. In 1913-14 the journal Gerboved (The Coat of Arms Scholar) was published.

In the USSR heraldry is studied within the total context of auxiliary historical disciplines. Of great importance for the study of heraldry are the works of N. P. Likhachev, A. S. Orlov, A. V. Artsikhovskii, B. A. Rybakov, and V. L. Ianin. Problems of heraldry have also received special attention in the work of V. K. Lukomskii.

Heraldry as a study is a code of rules for drawing up and describing coats of arms. The helmet has various forms, the crown corresponds to the title of the owner of the coat of arms, and the crest usually repeats the principal theme of the shield. In state coats of arms of monarchies, a shelter in the form of a tent or hut is depicted above the coat of arms proper. The principal part of a coat of arms is the shield, and since the end of the 18th century its French form has predominated. The right (dexter) and left (sinister) sides in a coat of arms are determined from the point of view of the person who is bearing the shield. The designs on its field are imposed by metals—or (gold) and argent (silver); by enamels—gules (red), azure (light blue), vert (green), purpure (purple), and sable (black); and by “furs”—ermine and vair (squirrel). Since the 17th century heraldry has accepted conventional graphic designations of these colors, the so-called dispensation. Traditionally metal is not placed on metal, or enamel on enamel. Initially the heraldic colors had symbolic meanings: gold signified wealth, power, fidelity, purity, and constancy; silver, innocence; azure, greatness, beauty, and clarity; red, courage; green, hope, abundance, and freedom; black, modesty, a high degree of education, and sadness; purple, dignity, strength, and valor. The ermine symbolized purity.

The field of the shield is usually divided into sections. The four principal divisions (per pale, per fesse, per bend dexter, and per bend sinister) may be combined in various ways (see Figure 1, 1-12). In the division of the smaller part of a field, heraldic figures are formed—the ordinaries (honorific) and subordinaries (of secondary importance). There are eight honorific heraldic figures: the chief, filet, base, pale, bend, chevron, potent (combination of chief and pale), and cross (13-24). There are approximately 200 varieties of the cross in heraldry, and they are all variants of three basic types (22-24). There are more than 300 subordinary heraldic figures, and of these the following 12 are the most frequently encountered: the bordure (external and internal), square, quarter, gyron, pile, bar, billet, lozenge, fusil, label, roundel (coin), and inescutcheon (shield within the shield) (25-42).

Also depicted on the shield are nonheraldic figures belonging to the coat of arms; these are conventionally divided into the following three groups: natural, artificial, and fantastic. A man is usually depicted as armed and frequently on horseback. A head, an arm with its hand holding a sword, and a burning heart are common designs. Human arms folded in a cross express faithfulness. Quadrupeds that appear frequently are the lion (a symbol of strength, manly courage, and magnanimity) and the leopard (bravery and audacity), which are distinguished only by their positions (43-44). Other commonly depicted animals are the horse (combining the bravery of the lion, the vision of the eagle, the strength of the ox, the swiftness of the deer, and the cleverness of the fox), 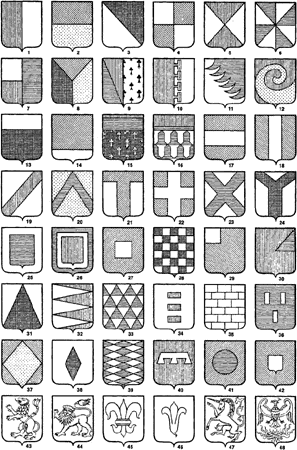 the dog (a symbol of loyalty and service), the cat (independence), the wolf (ill nature and avarice), the bear (foresight), the bull (fertility of the land), the sheep (meekness), the fallow deer (shyness), the wild boar (courage), and the stag (symbol of a warrior from whom an enemy flees). The most often pictured birds are the eagle (power and magnanimity), the raven (long life), the rooster (a symbol of battle), the heron (timidity), the peacock (vanity), the pelican (love of parents for their children), and the crane with a stone in one claw (an emblem of cautious watchfulness). Sea animals include dolphins (an emblem of strength), and insects include the bee, the ant (industriousness), and the butterfly (inconstancy). Snakes are shown stretched out at full length or coiled in a circle (a symbol of eternity). Plants are represented by trees, branches, flowers, wreathes, grains (in ears and sheaves), grasses, and fruits. The trees include oak (strength and force), olive (peace), and palm (longevity); the flowers include the rose and the lily (heraldic and natural) (45-46).

Also depicted in coats of arms are the sun, the moon, the stars, clouds, rainbows, rivers, hills, and fire. Artificial figures include objects from military life—various types of weapons and equipment (swords, cannon, pistols, hauberks, helmets, and so forth—and objects of civilian life. The latter include farm tools (sickles, scythes, yokes, collars, and so forth), seafaring and architectural items, symbols of abstract concepts (for example, a cornucopia), and emblems of duties and professions (for example, the lyre, cup, beads, and scepter). Fantastic figures include the phoenix (a symbol of immortality), unicorn (purity), dragon, centaur, siren, seven-headed hydra, two-headed eagle, and all kinds of angels. Frequently a heraldic figure contains an allusion to the family name of its owner or to the name of his property (the so-called canting arms).