the connection and attachment of parts, subassemblies, and modules in a definite sequence to produce a finished machine. A module is a detachable or nondetachable grouping of parts. The characteristic feature of a module is that it can be assembled apart from the other elements of the final product. A combination of two or more parts in a module is called a subassembly. There are primary, secondary, and higher order subassemblies. The highest order subassembly may be separated only into parts. The base element, whether a part or module, is that element from which assembly is begun. The amount of labor required for assembly in machine building is 25 to 35 percent of the total labor required to produce an item; if many adjustment operations are 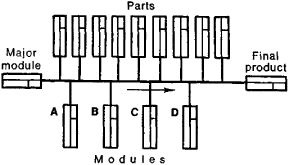 required, as in unit production and small-lot production, it reaches 40–45 percent.

Machine building uses both straight-line and modular assembly. A flow chart of a straight-line assembly is shown in Figure 1. Each element of the final product is indicated on the chart by a rectangle, separated into three segments. The designation of the element is given in the upper segment, its index number is in the lower left segment, and the total number of such elements in the finished product is given in the lower right segment. The index numbers of the elements correspond to the identification numbers of parts and modules in blueprints and specifications. Figure 2 shows the flow chart for the modular assembly of the product whose straight-line assembly is shown in Figure 1. Modular assembly permits the parallel assembly of modules and significantly reduces the time required for assembly. 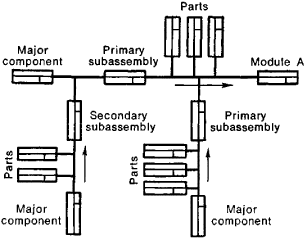 An assembly flow chart shows the structure and sequence of assembly of a product and its modules. In preparing flow charts, the required control and auxiliary operations are established. The charts give an idea of the technological effectiveness of the product’s design from the standpoint of its assembly. The design determines the assembly methods used.

In formulating assembly operations and their sequence, the organizational forms become apparent. The assembly may be progressive or nonprogressive. The transport of the item being assembled from one work station to another in progressive assembly may be accomplished manually (on a workbench, along a roller conveyor, or on carts), by hoisting machines (cranes or telphers), by periodic conveyors, such as apron conveyors or carts chain driven along a closed rail line, and by continuous conveyors.

Progressive assembly for a stationary product is accomplished on fixed stands arranged in a line. Each assembler or assembly team carries out a single operation, progressing consecutively from one stand to the next. Such assembly is suited to lot production with a high assembly rate, particularly in the assembly of heavy machines, where transport is difficult. In progressive assembly the assembly line must receive a steady supply of interchangeable parts and modules at a rate consistent with the assembly rate. Fitting and adjustment operations can be permitted only when they are integrated with the assembly rate. If high precision is required, interconnecting parts may be fitted to each other or fitted separately to the item being assembled. In this case, the interconnecting parts enter the assembly line in pairs. Progressive assembly shortens the production cycle, decreases in-process stock, permits increased specialization of the assemblers, increases chances to mechanize and automate production, and reduces the labor required. The mechanization of assembly operations is designed to replace partially or completely the manual labor of an operator by equipping work stations with electrical, pneumatic, or hydraulic tools and devices. The aim of automation is to transfer control functions to assembly machines and systems. The mechanization and automation of processes may be individual or complex, that is, integrated into systems.

Nonprogressive assembly is used in individual and small-lot production.

In formulating the technological process of assembly, devices, methods, and means of technical inspection are established in order to determine how the precision of the shape and dimensions and the relative position and movement of the elements of a product are related to given specifications. Checks must be made on the mutual positioning of the components in the product, on the quality of the connections made (the strength of and the torque applied to threaded connections and the alignment of contacting surfaces), the correct installation and presence of parts in connections, the total weight of modules and of the final product, and the balancing of rotating parts.

The major trends in improving the efficiency of assembly are mechanization and automation, the elimination of adjustment operations, the reduction of the number of parts and modules used, the standardization of fastenings and other parts in a product, and the reduction in a number of multisection dimensional links.

Feedback
Flashcards & Bookmarks ?
Please log in or register to use Flashcards and Bookmarks. You can also log in with
Flashcards ?
My bookmarks ?
+ Add current page to bookmarks
Mentioned in ?
References in periodicals archive ?
Engineers and administrators work on the building's upper level while assembly of machines destined for buyers in China, Poland and other countries takes place on the lower level's sprawling shop floor.
Family and staff help keep Kinefac thriving; Children of founder serve on board
A manufacturer could be an OEM introducing a machine to the market, or an end user Integrating interlinked machinery in order to create an assembly of machines. The manufacturer may use third parties to assist at various or all stages of the safety lifecycle.
Safety conformance: when it comes to safety conformance, machine manufacturers and their end users should consider the benefits of working with an inspection body rather than a notified body, PWE spoke to David Collier, business development manager at Pilz Automation Technology
On the same site LMBPL has also built a 9,900 m2 plant to manufacture coal mills, which are used to crush coal - fuel for boilers, and inaugurated assembly of machines. Plans call for the plant to start machining of related parts this autumn.
New Plants of MHI's JVs in India Launch Full-scale Operation, Producing Supercritical-pressure Boilers and Steam Turbines/Generators
Top left: The Indie Hop pellet mill is a $2 million, two-story assembly of machines that can churn out 6,000- 7,000 lbs of high-quality aroma hop pellets per day.
At the Indie Hop Mill, baled hops are transformed into pellets
Design, manufacturing and assembly of machines, parts and components are done in-house to the highest standards.
Melzer maschinenbau GmbH
3) a concrete built-to-print capability for the manufacturing and assembly of machines and machine parts upon given drawing packages.
Fameccanica Machinery (Shanghai)
Final assembly of machines took too long and didn't allow the company to respond quickly enough to changing market needs.
Survival is new game for U.S. manufacturers: Mazak camp teaches them how to run lean
There is no official figure showing the number of machines sold annually because mostly the assembly of machines is done in every nook and corner of the country from where collection of true data is not possible.
Impact of Smuggling on Sewing Machine Trade and Industry
By enabling machines to drive screws, the socket-headed screw dramatically improved assembly line efficiency, especially at Ford Motor Company, and opened the way for the robotic-driven assembly of machines.
ONE GOOD TURN: A Natural History of the Screwdriver and the Screw
These occurrences raise a number of issues that need to addressed, including inspections under PUWER and the CE Marking of the assembly of machines, even if each individual machine carries CE Marking.
Due diligence: with the 10th anniversary of the amended Machinery Directive just passed, Paul Laidler, managing director of Laidler Associates takes a look at the impact this Directive has had