(900–700 B.C.)
Large palaces and temple complexes with ziggurats characterize this style: the exterior walls were often ornamented in carved relief or polychrome bricks. Doorways had semicircular arches with glazed brick around the circumference; windows were square-headed and high up in the wall. Interior courts were filled with slender columns with high molded bases, fluted shafts and capitals of recurring vertical scrolls. The bracket form of the topmost part was fashioned with the heads of twin bulls. They were widely spaced to support timber and clay roofs. 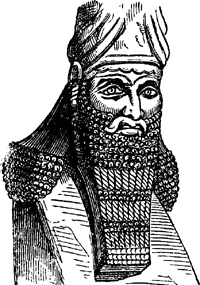 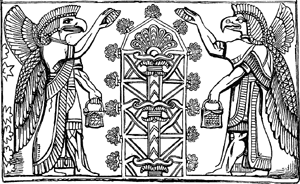 Assyrian architecture: colored tiling from Khorsabad
Architecture of the Assyrian empire (centered between the Tigris and Upper and Lower Zab rivers in southwest Asia); was expressive of its might, as conquerors of Mesopotamia and much of the adjacent countries between the 9th and 7th centuries B.C. Mud brick was used as the building material, although stone was available; stone was used only for carved revetments and monumental decorative sculptures. Excavations have
McGraw-Hill Dictionary of Architecture and Construction. Copyright © 2003 by McGraw-Hill Companies, Inc.

Feedback
Flashcards & Bookmarks ?
Please log in or register to use Flashcards and Bookmarks. You can also log in with
Flashcards ?
My bookmarks ?
+ Add current page to bookmarks
Mentioned in ?
References in periodicals archive ?
Its sheer fa?ade of subtly veined white marble has openings inflected by Lajta's studies of Assyrian architecture. The cleaning and restoration of the building in 1991 caused consternation--peeking out of a backstreet opposite the grand opera, it seemed to embody a theatrical kitsch.
'Each building foreshadows a little piece of the future': Edwin Heathcote on Bela Lajta
The latter element is a standard feature of Assyrian architecture and thus provides evidence that the edifice was constructed in Assyria, presumably within the vicinity of Khorsabad.
Royal Gardens, Parks, and the Architecture Within: Assyrian Views
Using arts and technology of other obedience nations: Winged bulls with human heads were an idea from Assyrian architecture. (Figure 3).
"Physical components of Persian architecture" in analysis of the Achaemenian governments' ideas
"Because what we have preserved here is a part of the colorful flowers that together make up the garden of Kurdistan." He also mentions that they have two books going to press, one about Assyrian food, the other about Assyrian architecture.
Cultural Museum of the Assyrians in Ankawa