a system for automatic regulation of the working modes of industrial installations, automatic control systems, and so on, in which the error of regulation tends to zero regardless of the magnitude of the influence if the influence assumes a set constant value.

Figure 1 represents an astatic control system for liquid in a vessel. When the outflow increases (or decreases), the float moves and closes the upper (or lower) contact. The motor, which is rotating, changes the position of the gate, which increases or decreases the inflow of liquid. In this case, with any outflow of liquid, an established state occurs for only one value of the magnitude being regulated—the value which corresponds to the neutral position of the relay. 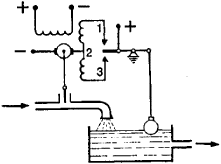 Astatic regulation is done by the regulator, which has the property of maintaining the same value of the quantity being regulated at any magnitude of the external influence on the astatic control system. To achieve this, integrating elements are included in the regulator circuit, or the characteristics of the sensitive element are chosen in such a way that the element itself is converted into an integrating element. The number of such sequentially connected elements is called the order of astatism of the regulator.

Regulators with astatism of the first order are usually used in industrial control systems. Regulators with higher orders of astatism are used in follow-up systems to eliminate errors of velocity, acceleration, and so on which have become established.