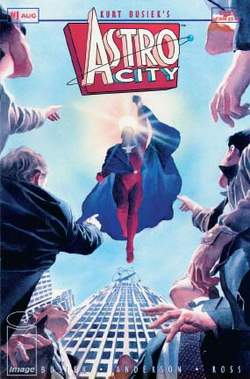 Astro City is the preeminent city in America, and the hub of superpowered activities on Earth. But how do its residents view their superheroic protectors and the villains they oppose, as well as assorted aliens, monsters, and other menaces? And how do the heroes themselves feel about their lives when they aren’t fighting crime? These themes are explored in Astro City, a comic book series created by writer Kurt Busiek in August 1995 for Image Comics imprint WildStorm (and originally titled Kurt Busiek’s Astro City). Busiek worked with interior artist Brent Anderson and cover painter Alex Ross to create a world that was the opposite in theory from the “realistic” comics of the 1990s. Instead of examining what superheroes would be like in the real world, he posed the question, “What would the world be like if superheroes were commonplace?”

Astro City has many archetypal heroes, but their private lives—and interaction with the world around them—is richer than in many comic book series. The Superman-like Samaritan flies from rescue to rescue, never able to enjoy the sensation of flight except in his dreams. Winged Victory prioritizes those she will aid: women first, men second. The superpowered Astra, ten-year-old daughter and member of The First Family, wants to learn to play hopscotch and go to school with normal kids. Jack-in-the-Box uses toys to fight crime, but worries about his own upcoming child. Dark avenger the Confessor hides a startling secret from everyone, including his teen sidekick, Altar Boy. An ex-villain named Steeljack gets out of prison and tries to resume a normal life, despite his silver skin. A cartoon anthropomorphic lion brought to life experiences the ups and downs of Hollywood stardom.

Not only the heroes are under the spotlight in Astro City. As he did in his landmark series Marvels—in which he examined the history of Marvel Comics’ heroes through the eyes of a newspaperman—Busiek often uses ordinary people and their perceptions to tell about the world of Astro City. Whether it is a newspaper reporter who cannot prove the astonishing adventure he witnessed with Silver Agent and the Honor Guard, a thief who discovers Jack-in-the-Box’s identity and imagines what the knowledge could do for him, a second-generation immigrant girl who finds the monster-filled Shadow Hill neighborhood more comforting than the gleaming city, or a father concerned about moving his family to Astro City because of the super-violence, the ordinary citizens of this metropolis make as much of an impact in Astro City stories as do the heroes.

Since its inception, Astro City has had an irregular publishing schedule, but given its anthology format, the wait for issues is not as problematic as for serialized storylines. Numerous hardcover collections and trade paperbacks of Astro City are available, and the series (under various names, including the five-issue Astro City: Local Heroes miniseries in 2003-2004) was recently published through DC Comics’ Wild-Storm/Homage imprint. A short-lived series of Astro City action figures was also released in 1999 by Toy Vault, and Bowen Designs released a Samaritan statue in April 1999. In 2010, Working Title Films began developing an Astro City live-action movie, for which Busiek wrote a script treatment and acts as executive producer. —AM