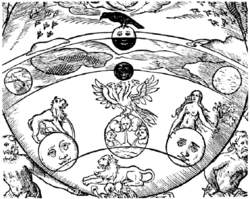 The apparent annual path of the sun among the stars during a year. Strictly, it is the projection of the plane of the earth's orbit on the celestial sphere. It is a great circle inclined at about 23°27′ to the celestial equator. It cuts the equator at two points called the equinoxes. The point where the sun cuts the equator on its path from south to north is known as the first point of Aries, and the path from north to south is called the first point of Libra.
An Illustrated Dictionary of Aviation Copyright © 2005 by The McGraw-Hill Companies, Inc. All rights reserved

1. Astronomy
a. the great circle on the celestial sphere representing the apparent annual path of the sun relative to the stars. It is inclined at 23.45? to the celestial equator. The poles of the ecliptic lie on the celestial sphere due north and south of the plane of the ecliptic
b. (as modifier): the ecliptic plane
2. an equivalent great circle, opposite points of which pass through the Tropics of Cancer and Capricorn, on the terrestrial globe
3. of or relating to an eclipse
Collins Discovery Encyclopedia, 1st edition © HarperCollins Publishers 2005