, in finance
mint, place where legal coinage is manufactured. The name is derived from the temple of Juno Moneta, Rome, where silver coins were made as early as 269 B.C. Mints existed earlier elsewhere, as in Lydia and in Greece; from there coinage was introduced into Italy. The first U.S. mint was established in Philadelphia in 1792. In 1991, U.S. mints operated in West Point, N.Y., Philadelphia, Denver, and San Francisco. See also numismatics; coin; medal.

mint, in botany, common name for members of the Labiatae, a large family of chiefly annual or perennial herbs. Several species are shrubby or climbing forms or, rarely, small trees. Members of the family are found throughout the world, but the chief center of distribution is the Mediterranean region, where these plants form a dominant part of the vegetation. The Labiatae typically have square stems, paired opposite leaves, and tubular flowers with two lips, the upper divided into two lobes and the lower into three. The leaves sometimes grow in whorls; the flowers may be white or shades of red, blue, or purple.

The family is well known for the aromatic volatile or essential oils in the foliage, which are used in perfumes, flavorings, and medicines. Among the more important essential oils are those derived from sage, lavender, rosemary, patchouli, and the true mints. Many of the commonly used potherbs are from the mint family, e.g., basil, thyme, savory, marjoram, oregano, and the plants mentioned above. As is true of most potherbs and spices, these have a history of medicinal use in domestic remedies. Catnip, pennyroyal, hyssop, self-heal, the horehound of confectionery, and curative teas from such plants as bee balm and yerba buena have been similarly used. Species of the Labiatae are often grown as ornamentals as well as in herb gardens, and in the United States several have escaped cultivation and become naturalized as wildflowers. Types of hyssop, sage, pennyroyal, mint, and lavender are among the prevalent native species.

The true mints belong to the genus Mentha. Commercially the most important species is peppermint (M. piperita). The leaves and tops are sometimes dried and utilized for flavoring and in medicine but are chiefly in demand for the oil, distilled out for use as a carminative and stimulant, for its derivative menthol (obtained also from other mints), and for flavoring purposes, especially in chewing gum and candy and as a disguise for disagreeable tastes of drugs. Spearmint (M. spicata) is distinguishable from peppermint by the absence of a leafstalk. Its flavor is milder (the aromatic principle is carvone), and it too is used in chewing gum and medicines and is often cultivated in gardens as a flavoring. Both plants are European perennials now naturalized in the United States.

Also useful medicinally and as a source of an essential oil is the pennyroyal. True, or European, pennyroyal (M. pulegium) is a prostrate perennial. The species name [Lat.,=fleabane] is an herbalist's name given for the plant's supposed property of driving away fleas. The related American pennyroyal (Hedeoma pulegioides) is a branching annual; pennyroyal tea was a traditional domestic remedy. Other American species of Hedeoma and similar genera are also called pennyroyal. The mint family is classified in the division Magnoliophyta, class Magnoliopsida, order Lamiales. 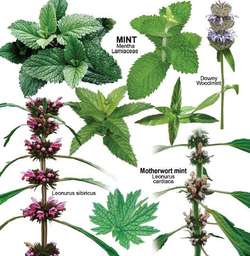 The mint family has over 7,000 species! And they are all edible. They become pretty easy to recognize after a while. Square stems, tiny hairs on stem, vertically stacked crunched flower bundles usually light purple, white or pink on top of stem or in several clusters along the vertical stem, usually where leaves are. Used for colds, flu, fever, indigestion, gas, headache, diarrhea, colic, sore throats, stomach aches. Whole plant is edible. Mint has strong oils. It is advisable not to take while pregnant. Important- make sure the plant looks and smells like mint. Some plants look like mint but don’t smell like it, or smell like mint but don’t look like mint- stay away! MINT Downy Woodmint (Blephilia ciliata) Soft fur on underside of leaves. Whitish blue purple flowers. Tea used for indigestion, colic, coughs, colds, chills and fevers. Make warm poultice with leaves for sinus headache. Chewing fresh leaves kills bacteria in the mouth and is good for teeth and gums.
Edible Plant Guide © 2012 Markus Rothkranz
The following article is from The Great Soviet Encyclopedia (1979). It might be outdated or ideologically biased.

a state enterprise which mints coins and manufactures orders, medals, and other state insignia of distinction made of metal, as well as various minted and stamped articles made of metal using gold and silver plating and jeweler’s enamel.

Mints originate with the formation of national states, when the minting of coins becomes a state monopoly. The first mint in Russia appeared in Moscow in 1534. In 1724 the mint in St. Petersburg was established and in 1876 became the only one in the country. In England a mint was established in London in the late 12th century, while in the United States the first mint was organized in Philadelphia in 1792.

In the first years after the Great October Socialist Revolution coins were not minted. The mint in Leningrad (formerly Petrograd) produced orders and anniversary medals until 1921. In August 1921 it began to mint silver coins, and in 1924 copper coins, followed later by bronze and nickel coins. In 1961 brass and nickel silver coins were first minted there. The Leningrad mint produces coins for circulation on a 1961 design. The mint in Moscow, which was set up in 1942, makes orders and medals of the USSR, insignia of distinction, and other articles from precious metals.

1. a place where money is coined by governmental authority
2. (of coins, postage stamps, etc.) in perfect condition as issued

1. any N temperate plant of the genus Mentha, having aromatic leaves and spikes of small typically mauve flowers: family Lamiaceae (labiates). The leaves of some species are used for seasoning and flavouring
2. stone mint another name for dittany
Collins Discovery Encyclopedia, 1st edition © HarperCollins Publishers 2005

(operating system)
(MinT is not TOS - a recursive acronym) A freeware, open source operating system for the Atari ST range of computers. MiNT was originally based on a port of BSD to Atari ST computers by Eric R. Smith. MiNT gave the Atari access to BSD's many network applications. A short (1992-94) romance between MiNT and Atari Corp., who decided to convert the system to the MultiTOS kernel, produced a unique TOS/Unix hybrid, which provides simultaneous access to both GEM and BSD application libraries.

Since MiNT is MultiTOS's kernel, it has kept all the features described above and, if an AES replacement is installed, it can show you a new face of MultiTOS. Unlike MultiTOS however, MiNT is based on a different file system, that is faster and more flexible than TOS's. Furthermore, thanks to the network support, MiNT allows an Atari to be an Internet server that can still run GEM and TOS applications! This has won MiNT many devotees ("MiNTquisitors"), making it the main competitor for ASH's MagiC.

Unlike Linux, MiNT can run on a Motorola 68000 with no FPU. It needs at least 4 MB of RAM, more to run multiuser or to run GEM applications at the same time.

Creating new crypto coins using a proof-of-stake (PoS) consensus algorithm. In contrast, proof-of-work (PoW) cryptos come into existence by being "mined." The mining and minting terms were created from real-world coin making. Gold and silver are "mined" out of the ground and then "minted" into coins for circulation.

In practice, the mining term is used in both cases. However, the distinction was created to differentiate between the two consensus methods that determine which entity adds blocks to the blockchain. See proof-of-stake algorithm, crypto mining and consensus mechanism.
Copyright © 1981-2019 by The Computer Language Company Inc. All Rights reserved. THIS DEFINITION IS FOR PERSONAL USE ONLY. All other reproduction is strictly prohibited without permission from the publisher.