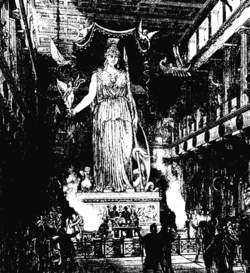 The temple of Athena in the Parthenon, Athens. Reproduced by permission of Fortean Picture Library.

Athene, asteroid 881 (the 881st asteroid to be discovered, on July 22, 1870), is approximately 12 kilometers in diameter and has an orbital period of 4.2 years. Athene was named after the Greek warrior goddess Athena, who was born fully formed from Zeus’ head and after whom the city of Athens was named. Jacob Schwartz gives the astrological significance of Athene as “protectively warlike, wise and just, associated with wisdom, handicrafts, weaving, navigation and agriculture.” J. Lee Lehman associates this asteroid, as well as the asteroids Pallas and Minerva, with “interest or ability in areas which combine the functioning of the mind and the body.” Athene, in contrast with Pallas and Minerva, indicates more interest in being competent than in being right (Pallas) or accomplished (Minerva).