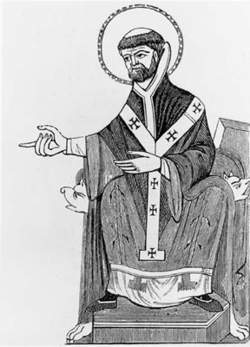 Augustine of Hippo, one of the Latin fathers of the Church, lived and taught in Roman North Africa. Fortean Picture Library.

Augustine of Hippo (354-430 CE) was a professor of rhetoric, born in the little town of Tagaste, North Africa. The purpose of rhetoric, as practiced in those days, was not to deliver truth. That was left to the philosophers. Students of rhetoric learned to present clear and forceful arguments for whatever they were called to defend. Augustine had a problem, however. He was forced to study and teach the works of Cicero, the famous orator of classical Rome. And Cicero was a philosopher who very much cared about truth. It was while studying his works that Augustine came to a conviction that style was worthless without substance. This decision led him to the study of Manicheism. Mani, its third-century founder, was convinced that the Zoroastrian concept of "light" battling "darkness" was true, but he interpreted the struggle as a battle between spirit and matter. Manichean mythology explained that light and darkness had somehow mingled within each individual. Salvation consisted of separating the two so as to prepare the human spirit for its return to pure light. Mani believed this principle had been revealed to Buddha, Zoroaster, and Jesus. Augustine responded favorably to Manicheism for two reasons. First, any teacher of rhetoric must consider the language of the Bible to be inelegant, at best. To a professor like Augustine, some of it must have appeared positively barbaric.

Second, Augustine had a real problem with the Christian concept of evil (see Evil). How did a "good" God allow evil into the universe, especially after pronouncing Creation "very good"? If evil came from God, God couldn't be good. And if it didn't, God couldn't be all-powerful. It was as simple, and as complex, as that.

But Augustine was simply too intelligent for his Manichean teachers to handle. Their explanations didn't help him in his quest. So he turned to Neoplatonism.

This philosophy was very popular at the time, and it appealed to Augustine because it had religious overtones. It was a philosophical discipline that sought to reach the "One," the source of all being. Neoplatonists taught that all reality derived from one principle that was totally good. The more one understood the good, the further one moved from evil. Moral evil consists of looking away from the One and living in the world of contradictions and inferior ideas. So Augustine became convinced that evil was not a thing, but rather a direction—away from the One and the Good.

This notion seemed to satisfy him until he agreed to listen to a series of sermons preached by Ambrose, at that time the most famous preacher in Milan.

Although he attended at first just to listen to Ambrose's rhetoric, he was soon captivated by his message.

The key, according to Ambrose, was that the Bible was to be interpreted allegorically, not literally. This was Augustine's answer; it allowed him to reconcile what he had previously seen as the inherent contradictions of Christianity. He didn't need to check his great intellect at the door of the church. He decided to become a Christian.

At first he was confused about the fact that he rather liked the good life that seemed to be anathema to the Christian community. His famous prayer reveals that struggle. "God, give me chastity and continence; but not too soon!"

Through years of intellectual and emotional struggle, however, Augustine persevered to emerge as one of the leading intellectual Christian philosophers and theologians. His closely reasoned arguments against what are now called heresies; his spiritual autobiography, Confessions; and his monumental City of God are still required readings at most seminaries.

He eventually became the favorite theologian of the sixteenth-century Protestant Reformers, and he is today considered the most influential Western theologian of both the Protestant and Catholic traditions.

1. Saint. 354--430 ad, one of the Fathers of the Christian Church; bishop of Hippo in North Africa (396--430), who profoundly influenced both Catholic and Protestant theology. His most famous works are Confessions, a spiritual autobiography, and De Civitate Dei, a vindication of the Christian Church. Feast day: Aug. 28
2. Saint. died 604 ad, Roman monk, sent to Britain (597 ad) to convert the Anglo-Saxons to Christianity and to establish the authority of the Roman See over the native Celtic Church; became the first archbishop of Canterbury (601--604). Feast day: May 26 or 27
3. a member of an Augustinian order
Collins Discovery Encyclopedia, 1st edition © HarperCollins Publishers 2005

Feedback
Flashcards & Bookmarks ?
Please log in or register to use Flashcards and Bookmarks. You can also log in with
Flashcards ?
My bookmarks ?
+ Add current page to bookmarks
Mentioned in ?
References in periodicals archive ?
Rereading the Renaissance: Petrarch, Augustine, and the Language of Humanism.
From the premise of a shared "preoccupation with reading and writing" (217), the book examines Petrarch's appropriation of Augustine's language to shape and articulate his humanism.
Rereading the Renaissance: Petrarch, Augustine, and the Language of Humanism
Augustinian scholars distinguish at least three conversions in Augustine's life, which he recounts in Books 3, 7, and 8 of his Confessions.
argues that the first conversion, which was triggered by the reading of Cicero's Hortensius and, after a brief disappointing exploration of the Scriptures, led Augustine to turn for some nine years to Manicheism, actually had positive results, even in the eyes of Augustine the bishop.
Images of Conversion in St. Augustine's 'Confessions.'
Augustine, FL Mover's Guide outlines everything you need to know about moving to St.
Augustine, FL community is so much more than just getting your house set up so the section also tells potential new residents fun things only the locals know like how to buy a beach pass, where you pick up your discount parking card for the downtown parking garage and which local Facebook groups to join to stay in the loop.
St. Augustine Social Magazine Tells You Everything You Need to Know About Moving to St. Augustine, FL
AUGUSTINE USUALLY RECEIVES no more than an honorable mention in the discussion of the theological origins and underpinnings of the Reformation in surveys of Reformation history, at least those written in English.
Scholarship has signaled Augustine's influence on Protestant reformers, especially Martin Luther.
Peter Canisius and the "truly Catholic" Augustine
RETHINKING AUGUSTINE'S EARLY THEOLOGY: AN ARGUMENT FOR CONTINUITY.
When the Pelagian Julian accused the Bishop of Hippo of having changed his opinion regarding the nature and transmission of original sin, Augustine invited Julian to look at his earliest writings and therein to see the consistency of thought that existed all along--sic tenui semper ut teneo (c.
Rethinking Augustine's Early Theology: An Argument for Continuity
The title chosen by O'Donnell for his biography of Augustine harks back to the 1969 biography by Peter Brown, namely, Augustine: A Biography.
Augustine: A New Biography