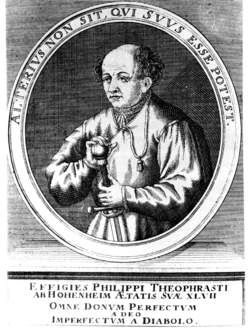 "Paracelsus" Philippus Aurelis Theophrastus Bombast von Hohenheim was born in Switzerland, near Einsiedeln, in the canton Schwyz. He named himself Paracelsus, probably as an indication that he was superior to Celsus, the first century Latin medical writer.

Paracelsus studied at the University of Basle and, later, with the abbot of Sponheim. In 1529, after a controversial three years of lecturing on medicine at the university, during which he burned the works of Avicenna and Galen, he was thrown out and wandered Europe. He settled in Salzburg in 1541 under the protection of Archbishop Duke Ernst of Bavaria. There he died in September of that year, some say from being thrown down a steep hill by his enemies.

Paracelsus earned a reputation as an alchemist and was certainly a doctor with a great gift for healing, believing that the body and soul must be treated together to bring about a cure. Although he looked askance at ceremonial magicians, he did believe that they possessed greater healing power than did his contemporary physicians. He strongly believed that there was a "natural" magic available that came from deity and conferred on the user the true power to heal. His beliefs included the use of talismans and the study of astrological influences. Paracelsus's Astronomica et astrologica opuscula (Cologne, 1567) features a woodcut illustration of him holding a sword with the word "Zoth" engraved on the pommel. It was generally believed that his famous sword had a demon named Azoth imprisoned in that pommel. Grillot De Givry, however, points out that azoth was the word Paracelsus used for the so-called "vital mercury" of the alchemists.

Paracelsus was the first to describe zinc and to introduce the use of chemical compounds into medicine. A book of his medical theories, Die grosse Wundartzney, was published in 1536.