[¦ȯs·tə‚nīt]
(metallurgy)
Gamma iron with carbon in solution.
McGraw-Hill Dictionary of Scientific & Technical Terms, 6E, Copyright © 2003 by The McGraw-Hill Companies, Inc.
The following article is from The Great Soviet Encyclopedia (1979). It might be outdated or ideologically biased.

one of the structural components of iron-carbon alloys, a solid solution of carbon (to 2 percent) and alloying elements in gamma iron. Austenite derives its name from the English scientist W. Roberts-Austen (1843–1902). The crystal lattice is a cube with centered facets. Austenite is nonmagnetic. Its density exceeds that of other structural components of steel. In carbon steels and cast irons, austenite resists temperatures exceeding 723° C. In the process of cooling steel, austenite is transformed into other structural components. In iron-carbon alloys containing nickel, manganese, and chromium in significant amounts, austenite can be completely preserved after cooling to room temperature (for example, stainless chromium-nickel steels). Depending on the composition of the steel and its relative cooling, austenite can be partially preserved in carbon or alloyed steels (so-called retained austenite).

The study of the transformations of austenite began with the discoveries of D. K. Chernov (1868). He first pointed out the connection between these transformations and the critical points of steel. During cooling below these points, phases are formed with different mutual arrangements of atoms in the crystal lattice and in some cases with a modification of chemical composition.

When austenite alloys containing more than 2 percent carbon are converted in the presence of primary formations of cementite or graphite, the resulting structures are unique.

Alloying elements, with the exception of cobalt, increase the duration of the incubation period of the pearlite transformation. 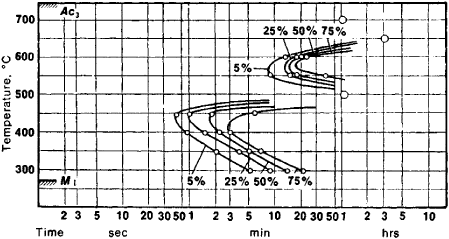 Feedback
Flashcards & Bookmarks ?
Please log in or register to use Flashcards and Bookmarks. You can also log in with
Flashcards ?
My bookmarks ?
+ Add current page to bookmarks
Mentioned in ?
References in periodicals archive ?
An experimental AHS-type steel with a reduced Ms temperature and a carbon content of 0.4% and a manganese level of 2.5% was experimentally treated using the Q&P process with various times at the austenitizing temperature and various rates of cooling to the quenching temperature.
Stability of Retained Austenite in High-Strength Martensitic Steels During Cold Deformation
In some cases, particularly involving hardening temperatures over 2000F, multiple preheating steps may be used prior to reaching the final austenitizing temperature.
Heat treatment of tool steels
Hardening treatment Hardening treatment Material Austenitizing Austenitizing Tempering Tempering ([degrees]C) (s) ([degrees]C) (s) Steel 1 1030 1800 610-610 7200 Steel 2 1050 1800 510-510 7200 Steel 3 1040 1800 520-520 7200 Table 3: Chemical composition (wt.%) and hardness of hot work tool steels.
Wear and Friction Evaluation of Different Tool Steels for Hot Stamping
Given the need to obtain high strength and impact energy in grade AISI 422, in present research, the effect of austenitizing temperature and tempering time on strength and impact as well as microstructure has been evaluated.
The effect of heat treatment on mechanical properties and microstructure of the AISI 422 martensitic stainless steel
In order to prevent formation of fine new cementite lamellae, the austenitizing time was reduced to 15 seconds (H15-1).
Accelerated carbide spheroidisation in 100CR6 steel
Conventional heat treatment (CHT) consisted of the following steps: heating up to the austenitizing temperature of 1050[degrees]C in a vacuum furnace, holding at the temperature for 30 min, and nitrogen gas quenching (5 bar).
Microstructure and Hardness of Cold Work Vanadis 6 Steel after Subzero Treatment at -140[degrees]C
The heat treatment of St-2 was normalization (austenitizing at 870[degrees]C, temperature 30-50[degrees]C higher than austenitizing temperature and air cooling to room).
Mechanical properties and cyclic fracture behavior of differently heat-treated steel/Skirtingai termiskai apdoroto plieno mechanines savybes ir ciklinis irimas
The diagram was calculated for austenitizing temperature of 950[degrees]C, grain size of 10 [micro]m and lowest volume fraction of the phase of 0.1%.
Investigation of phase transformations in high-strength low-alloyed steel
The specimens were firstly preheated to 1473 K at a rate of 5 K/s and held for 5 min at isothermal conditions for fully austenitizing. Then the specimens were cooling to the deformation temperature at the rate of 5K/s and held for 30 s for the homogenization of temperature and compressed at the selected conditions.
A Characterization for the Deformation Behavior of As-Cast P91 Alloy Steel and Utilization in Hot Extrusion Process
Two C70S6 crackable connecting rods have been applied austenitizing 800[degrees]C for 1 hour in the controlled heat treatment furnaces separately and soonly after it was taken to salt bath in 450[degrees]C for 3 hours, then quenched in still air as shown in Fig.
Heat treatment effects to the fracture splitting parameters of C70S6 connecting rod/C70S6 svaistikliu terminio apdirbimo itaka skilimo sklidimo parametrams
In the 1930s, a fine, feathery, needle-like microstructure unlike ferrite, pearlite and martensite was found in steels when they were cooled rapidly from austenitizing temperatures and held at intermittent temperatures.
Heat treating iron castings: part 2