the general name for methods of extracting coal in which there are no workers at the coal face except to perform ancillary work such as assembly, disassembly, and repair of equipment. The equipment is controlled remotely from preparatory workings. Automated coal mining does away with the difficult labor of the face workers and makes possible a high concentration of mining effort in the pit. It is carried out in the underground exploitation of coal fields but can be utilized in the extraction of other minerals. Two groups of automated coal mining methods are recognized: chemical methods, in which the state of aggregation of the coal is changed (for example, underground gasification of coal); and mechanical, including purely mechanical, hydraulic, and drilling-and-blasting methods (for example, auger excavating). The chemical methods are at present insufficiently developed. The principal mechanical methods of automated coal mining are shown in Figure 1. 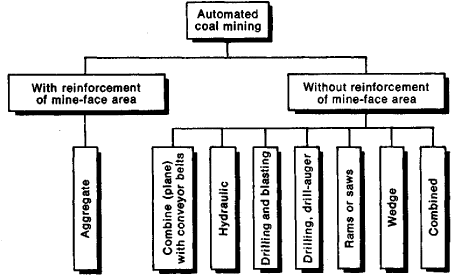 Figure 1. Classification of the methods of automated coal mining. The methods are arranged from left to right in order of decreasing degree of study and expected volume of application.

Aggregate excavation is carried out in the USSR, Great Britain, and Poland.

Excavation combined with conveyors is designed for gently sloping beds that are thin and of medium thickness with stable flanking rocks in mines as deep as 300 m. Commercial operations are carried on in the USA, Great Britain, and the USSR.

Hydraulic excavation is employed for beds over 0.8 m in thickness having dip angles more than 5° in rocks of higher than average collapsibility. It is accomplished by means of high-pressure water jets; the coal thus removed is transported by the same water (exhaust or under pressure) along the floor of the mine, channels, or pipes and is drawn up to the surface of the pit. The hydraulic excavation of coal in underground conditions was first attempted in the USSR (1936) and is carried out on a commercial scale. Mechanical-hydraulic excavation—that is, the removal of coal from a bed with a cutter-loader and its transportation by hydraulic means—has become widespread.

Drilling-and-blasting excavation is utilized in steep beds of over 1 m thickness in rocks that are difficult to break down. In this method holes are drilled parallel to the working face, loaded with explosive, and set off. As a result a steep bed is broken up and the coal slides into the gallery by its own mass to the transportation equipment.

Boring and augering excavation is used on very thin, thin, and medium-thick beds at any dip angles in rocks that will collapse easily. The boring method is used for steep beds, and augering is used on gently sloping beds. With these methods coal is excavated by boring holes in the bed of mineral; the holes have a diameter close to or equal to the bed’s thickness. These methods are promising for extracting coal from beds where there is a risk of bursts and from guard pillars.

Excavation by means of rams or saws is used for very thin and thin steep beds in rocks of higher than average collapsibility. Rams act on the beds dynamically. There are several designs of ram equipment and coal saws. They are used with various mining systems. The roofs are kept under control during excavation of coal with rams by supporting them on coal pillars, filling the excavated space, or by controlled release of the roofs.

These methods are utilized in the USSR and in the Federal Republic of Germany.

Wedging excavation is used in thin, steep beds in rocks that are difficult to break down. In this method, a wedge is drawn sequentially through holes bored parallel to the working face. Studies on the removal of coal from a block by this means were first begun in the USSR (1956). The method was tried in Great Britain in 1968.

Automated coal mining by combined methods is also feasible. The basic aspects of the problem of creating underground automated coal mining methods were first formulated in the USSR (1954) and presented at the Second International Mining Congress in the Czechoslovak Socialist Republic (1961).