[¦ȯd·ə¦mōd·iv ′en·jən]
(mechanical engineering)
The fuel-consuming machine that provides the motive power for automobiles, airplanes, tractors, buses, and motorcycles and is carried in the vehicle.
McGraw-Hill Dictionary of Scientific & Technical Terms, 6E, Copyright © 2003 by The McGraw-Hill Companies, Inc.
The following article is from The Great Soviet Encyclopedia (1979). It might be outdated or ideologically biased.

heat engines (internal combustion engines and steam engines) and electric engines used in automotive vehicles. Most automotive engines are piston (reciprocating) internal combustion engines. Automotive engines are divided into four-cycle and two-cycle engines according to the working process and are divided by the method of fuel ignition into spark plug ignition engines (also known as carburetor engines or gasoline engines) and diesel engines, which are self-ignition engines using high-temperature air compressed within the engine cylinders. The fuel mixture of vaporized gasoline and air, blended in the carburetor, is admitted to the cylinders of carburetor piston engines. Piston engines without carburetors also exist; these are equipped with a device for direct injection of fuel into the intake manifold or into the engine cylinder. 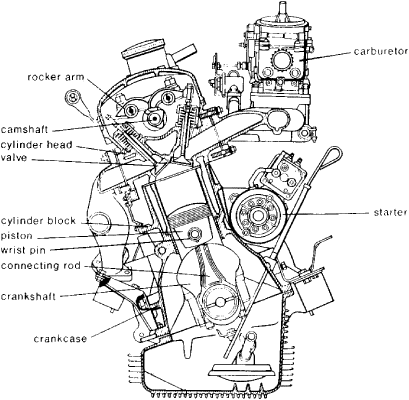 The operating cycle of these engines is the same as that of carburetor engines. In diesel engines, diesel fuel is sprayed through the nozzle of a high-pressure pump directly into the cylinders, where it is mixed with air. Automotive engines are distinguished by the number and placement of the cylinders (in-line engines, V-engines, and so on), by the location of the valves (in the cylinder head or in the cylinder block), by the cylinder capacity, by the motor cooling system (liquid or air), by function, and so on. Four-cycle overhead valve liquid-cooled carburetor-type piston engines are used in modern automobiles, as well as in small and medium trucks. Diesels, which burn a cheaper fuel than gasoline and offer advantages over carburetor type engines in fuel economy and length of service, are used mainly for the propulsion of heavy trucks and large buses. Gasoline motors are superior in ease of design and low initial cost, power per liter of displacement, starting qualities, and control of exhaust smoke, but modern high-speed diesel 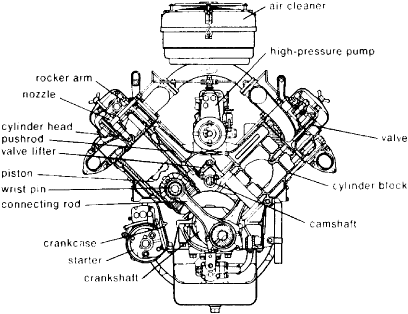 engines come close to carburetor engines in such important performance characteristics as specific mass (kg/kW or kg/hp), compactness, and noise-free operation. With these advances, and thanks to increases in power per liter of displacement, diesel engines have begun to find applications within the past decade in lightweight trucks and even in passenger automobiles.

Modern four-cycle piston engines (see Figures 1 and 2) consist of a cylinder block usually made integrally with the crankcase, the cylinder head, pistons with sealing rings and oil-control piston rings, connecting rod, crankshaft, flywheel, camshaft, spring-loaded intake and exhaust valves, valve train parts (rocker arm, valve lifter), the drive connecting the crankshaft and camshaft, spark plugs or fuel nozzle, and so on. These engines are equipped with a radiator and fan for the cooling system. They have pumps for forced circulation of lubricant oil and cooling fluid and for bringing fuel from the fuel tank, as well as fuel filters, oil filters, and air cleaners, a starter or cranking motor, ducts for air, gas, fuel, oil, and cooling fluid, and automatic control devices controlling the frequency of rotation of the crankshaft and the temperature of the cooling fluid and fuel mixture.

Further development of automotive engines envisages increased power and service life, smaller size, and lower content of noxious exhaust components. The power increase will be achieved primarily through an increase in the frequency of crankshaft rotation in carburetor engines and through supercharging in diesel engines. In addition, the compression ratio is being increased in gasoline engines, and the carburetor will be replaced, to a partial extent, by a system of forced fuel injection. The replacement of conventional piston engines on some lightweight automobiles and light-duty trucks by lightweight and compact rotary-piston engines is highly promising. Once the problem of the fuel economy of gas turbine engines can be solved without exorbitant complications in the design of gas turbine engines, these engines will find broad application at power levels of 750 kW (1,000 hp) and higher. The design of lightweight and compact batteries will make it possible to replace piston engines by electric engines on automotive vehicles traveling within cities.

The component of the motor vehicle that converts the chemical energy in fuel into mechanical energy for power. The automotive engine also drives the generator and various accessories, such as the air-conditioning compressor and power-steering pump. See Automotive climate control, Automotive electrical system, Automotive steering

An Otto-cycle engine, the dominant automotive engine in use today, is an internal combustion piston engine that may be designed to operate on either two strokes or four strokes of a piston that moves up and down in a cylinder. Generally, the automotive engine uses four strokes to convert chemical energy to mechanical energy through combustion of gasoline or similar hydrocarbon fuel. The heat produced is converted into mechanical work by pushing the piston down in the cylinder. A connecting rod attached to the piston transfers this energy to a rotating crankshaft. See Internal combustion engine, Otto cycle

Engines having from 1 to 16 cylinders in in-line, flat, horizontally opposed, or V-type cylinder arrangements have appeared in production vehicles. Increased vehicle size and weight played a major role in this transition, requiring engines with additional displacement and cylinders to provide acceptable performance. See Engine

In many automotive engines, the camshaft, which operates the intake and exhaust valves, has been moved from the cylinder block to the cylinder head. This overhead-camshaft arrangement allows the use of more than two valves per cylinder, with various multivalve engines having three to five. Some overhead-camshaft engines have only one camshaft, while others have two camshafts, one for the intake valves and one for the exhaust valves. A V-type engine may have four camshafts, two for each bank of cylinders.

Most engines have fixed valve timing, regardless of the number of camshafts or their location. Variable valve timing can improve fuel economy and minimize exhaust emissions, especially on multivalve engines. At higher speeds, volumetric efficiency can be increased by opening the intake valves earlier. One method drives the camshaft through an electrohydraulic mechanism that, on signal from the engine computer, rotates the intake camshaft ahead about 10°. Another system varies both valve timing and valve lift by having two cam lobes, each with a different profile, that the computer can selectively engage to operate each valve. Computer-controlled solenoids for opening and closing the valves will allow elimination of the complete valve train, including the camshaft, from the automotive piston engine while providing variable valve timing and lift.

Alternative engine designs have been investigated as replacements for the four-stroke Otto-cycle piston engine, including the two-stroke, diesel, Stirling, Wankel rotary, gas turbine, and steam engines, as well as electric motors and hybrid power plants. However, only two engines are in mass production as automotive power plants: the four-stroke gasoline engine described above, and the diesel engine. See Diesel engine, Rotary engine, Stirling engine