Avebury (āˈbərē), village, Wiltshire, S central England. The village, with a medieval church and Elizabethan manor house, lies within Avebury Circle, a Neolithic circular group of upright stones that is older and larger than Stonehenge but not so well preserved. The village and the circle have belonged to the nation since 1943 and are administered by the National Trust. To the south of Avebury is the similarly ancient Silbury Hill, the largest prehistoric artificial mound in Europe, 130 ft (39.6 m) high and covering more than 5 acres (2 hectares) at its base.
The Columbia Electronic Encyclopedia™ Copyright © 2022, Columbia University Press. Licensed from Columbia University Press. All rights reserved. 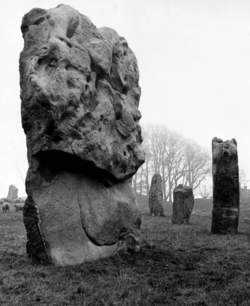