(redirected from Awful disclosures)
The following article is from Conspiracies and Secret Societies. It is a summary of a conspiracy theory, not a statement of fact. 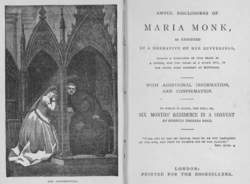 The Awful Disclosures of Maria Monk, about a nun who escapes life as a sex slave at the hands of priests, was a bestseller in the 1830s.

Before she escaped from the convent, Sister Maria was tortured and made a sex slave of evil priests. Her subsequent book, The Awful Disclosures of Maria Monk, became a pre–Civil War bestseller, second only to Uncle Tom’s Cabin.

Since its first release in January 1836, The Awful Disclosures of Maria Monk as Exhibited in a Narrative of Her Life and Sufferings during a Residence of Five Years as a Novice and Two Years as a Black Nun in the Hotel Dieu Nunnery in Montreal has never been out of print. Awful Disclosures sold an estimated 300,000 copies before the Civil War and was second in sales only to Harriet Beecher Stowe’s Uncle Tom’s Cabin.

In her book Maria, although Protestant, attends a Roman Catholic school, where the nuns convince her that the Protestant Bible and the teachings it encourages are evil. Maria converts to Catholicism and is shocked when she receives offensive sexual interrogation by the priests when she goes to confession. In spite of such humiliating inquiries, Maria decides to become a nun. After four years as a novice, she reconsiders her decision and leaves the convent, only to fall into a hasty and unfortunate marriage. Once again, Maria changes her mind and returns to the convent to prepare to take her final vows. And now, to her horror, she learns about the real lifestyles of nuns and priests.

After she has taken her final vows, she is told that she must be an obedient nun and obey without question whatever a priest commands or asks of her. She is told to engage in sexual intercourse with those priests who demand it of her. She is forced to participate in an all-night orgy with three priests. Nuns who refuse to submit to the priests’ demands are kept in underground dungeons. Infants born of such unholy unions are baptized, then immediately killed and buried in lime pits in the convent basement. Troublesome nuns are tortured, murdered, and buried in those same pits.

When Maria finds herself pregnant by a priest, she decides to escape the foul convent. Pursued by agents of the church, she manages to make her way to New York, where she is at last rescued by courageous Protestant clergymen.

Published in an era when the Know-Nothing anti-Catholic political party was actively spreading hatred of the Roman Catholic Church and manufacturing accounts of sexual perversion among its clergy, The Awful Disclosures of Maria Monk became a popular propaganda tool. Originally published by a dummy company established by Harper Brothers of New York to keep its reputation unsullied from what was considered salacious material, Maria Monk became the heroine of the Protestant press. The public gobbled up copies of the book that gave them what they believed was the first true portrayal of convent life and fulfilled all the expectations that had been fueled by rumors and anti-Catholic slander.

Slowly, however, the fabric of the fabulous tale began to unravel. Investigators in Montreal found that the Hotel Dieu was not at all like the description in Maria’s book. It was, in fact, a greatly respected charitable hospital and convent whose nuns had recently become revered by the citizenry for their heroism in a cholera epidemic.

Other investigators located Maria’s mother, who informed them that the girl had been given to wild fantasies after an injury to her ear and had become uncontrollable. Maria had been committed to a Magdalen Asylum in Montreal and, as a Protestant, that had been her only contact with the Roman Catholic Church. At eighteen she left the asylum after becoming pregnant and found her way to the Canadian Benevolent Society, a Protestant mission with a strong anti-Catholic bias. She told an interesting story, which caught the ear of William Hoyte, who took her to New York to meet with Rev. J. J. Slocum and a group of Protestant ministers. It may never be known if the story told in The Awful Disclosures of Maria Monk was Maria’s own imaginative fantasy or if the ministers were responsible for the lurid tale. There seems little question that the clergymen, particularly Slocum, were the actual authors.

Maria Monk did nothing to aid her cause. She disappeared in August 1837, only to resurface in Philadelphia, where she claimed to have been kidnapped by priests. It was discovered, however, that she had simply run off with another man under an assumed name. Another book was published under her name that year, claiming that pregnant nuns from Canada and the United States were being hidden on an island in the Saint Lawrence River.

In 1838 Monk became pregnant again, though she claimed it was a Catholic plot to discredit her. She married, but her husband soon abandoned her. In 1849 she was arrested for pickpocketing at a house of prostitution. She died a short time later at age thirty-three, either in a charitable house or, as some claimed, in prison. The child of that last marriage published a book in 1874 telling the story of Maria’s final days, as well as of the daughter’s own conversion to Catholicism.

The Awful Disclosures of Maria Monk was important in that it popularized many of the anti-Catholic stereotypes that would persist in the American consciousness well into the twentieth century. Monk painted a Catholic faith based on medieval superstition, inquisitorial tortures, crafty “Jesuitical” manipulation, suppression of the Bible, and oppression of liberty.

Feedback
Flashcards & Bookmarks ?
Please log in or register to use Flashcards and Bookmarks. You can also log in with
Flashcards ?
My bookmarks ?
+ Add current page to bookmarks
References in classic literature ?
"Me's so 'shamed of Pokey," sobbed the small culprit, quite overcome by remorse and confusion at this awful disclosure.
View in context
The NAB sources told that awful disclosures revealed in connection with federal secretary interior plot scandal.
NAB takes Interior Secretarys plot scandal record into custody
The most famous and popular of these tales was Awful Disclosures of the Hotel Dieu Nunnery ostensibly written by Maria Monk about her experiences in the Montreal convent.
The nun, the priest, and the pornographer: scripting rape in Maria Monk's awful disclosures
In such lurid novels as The Awful Disclosures of Maria Monk (about the Hotel Dieu Convent in Montreal) and Life in the Grey Nunnery, "the convent ...
Changing Habits: Women's Religious Orders in Canada
Maria Monk's Awful Disclosures of the Hotel Dieu Nunnery of Montreal, the revised edition published in 1836, sold over 300,000 copies by 1860, only outsold by Uncle Tom's Cabin.
Scrabble tiles can help decipher the devil's messages: from baby-killing nuns to baby-wanting witches in American fiction and culture/Kelime Oyunu taslary seytanyn mesajyny desifre etmeye yardym edebilir: amerikan romany ve kulturunde bebek olduren rahibelerden bebek isteyen cadylara gecis
Positing Catholicism as "the primitive that Protestantism leaves behind" (5) but with which it continues to be in dialogue, Griffin argues that novels of religious polemic ranging from Maria Monk's Awful Disclosures of the Hotel Dieu Nunnery of Montreal to Charlotte Bronte's Villette shed important critical light on the formation and maintenance of national imaginaries in both the U.S.
Griffin, Susan M. Anti-Catholicism and Nineteenth-Century Fiction
Whether in the early travel guides to Quebec, the "autobiographical" expose Awful Disclosures of Maria Monk, Abbot Thomas Maguire's history of the Ursulines entitled Notes sur l'erection primitive du Monastere des Ursulines de Quebec, or Clara Gustche's photographs that make up The Convent Series, the convent has posed a significant problem to the authors and artists who have sought to represent this ultimate interior locale on paper.
Surface interiorities: representing the Quebec convent
Morse's Foreign Conspiracy Against the Liberties of the United States and the titillating Awful Disclosures of self-proclaimed "escaped nun" Maria Monk in the 1830s, some American Protestants began to organize to protect America from what they believed was an orchestrated conspiracy hatched in the Vatican.
Playing the anti-Catholic card: historical perspectives on the power of "anti-Catholicism."
Sexual dysfunction, hypocrisy, institutional self-regard, Soviet-style secrecy, pathological hostility to plain dealing--even the infamous 19th-century nativist fable The Awful Disclosures of Maria Monk couldn't support so many anti-Catholic stereotypes.
E pluribus umbrage: the long, happy life of America's anti-defamation industry
In 1836, a book called The Awful Disclosures of Maria Monk caused an enormous stir.
An "inner colony": die-hard separatists in Quebec feel oppressed, as if governed by a colonial power. It might be productive for people in the rest of Canada to try to understand their point of view rather than complain about Quebeckers being spoiled. (National Unity--Quebec's Anger)
The following four chapters all treat the work of women writers engaged in a number of interventions in the debate about women's public speech, beginning with Maria Monk and her tract of 1836, The Awful Disclosures, and its anti-Catholic influence on the nativist movement, before moving on to examine pro-slavery and anti-slavery arguments in Caroline Lee Hentz's The Planter's Northern Bride and Harriet Jacobs's Incidents in the Life of a Slave Girl.
Voices of the Nation: Women and Public Speech in Nineteenth-Century American Literature and Culture
A decade earlier, Influential New York businessmen formed the Protestant Association to preserve America from "Popery in this land of ours." It published a newspaper, pamphlets and such books as Awful Disclosures and The Secrets of Nunneries Disclosed describing orgies and ritual sacrifice of infants by crazed clerics.
THE ROGUE'S MARCH: JOHN RILEY AND THE ST. PATRICK'S BATTALION 1846-48
Encyclopedia browser ?
Full browser ?
CITE
Site: Follow: Share:
Open / Close