[′a·zō ‚dīz]
(organic chemistry)
Widely used commercial dyestuffs derived from amino compounds, with the ‒N‒ chromophore group; can be made as acid, basic, direct, or mordant dyes.
McGraw-Hill Dictionary of Scientific & Technical Terms, 6E, Copyright © 2003 by The McGraw-Hill Companies, Inc.
The following article is from The Great Soviet Encyclopedia (1979). It might be outdated or ideologically biased.

organic dyes whose molecules contain one or several azo groups—N=N—which connect aromatic radicals. Depending on the number of such groups, the dyes are called mono-, dis-, tris-, or polyazo dyes. Usually, azo dyes contain substituted or unsubstituted NH2 and OH groups in 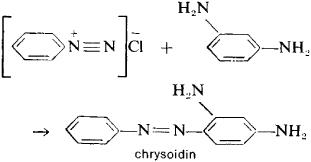 the aromatic nucleus and also NO2, CI, SOH3H, COOH, and others. The presence of acid groups ensures the water solubility of the dyes.

Synthesis of azo dyes is achieved by combining aromatic diazo compounds ArN2Cl with phenols, aromatic amines, and their derivatives. For example, see above.

Usually, a dye is precipitated from a sodium chloride solution, dried, and then pulverized.

The simplest monoazo dyes are usually yellow, orange, or red in color. An increase in the number of azo groups, a substitution of phenyl radicals with naphthyl radicals, and an increase in the number of oxy- and amino- groups will intensify the color. Depending on their structure and the character of their interaction with textiles, azo dyes are divided into several groups: basic, acid, direct, mordant, ice-color, active, and others. Basic dyes contain NH2 groups; acid dyes, usually one or several sulfo groups. The latter are used in dyeing silk and wool. Large amounts of direct azo dyes are produced for use in coloring cotton fabrics; usually these are polyazo dyes based on benzidine and α-naphthylamine and its sulfo acids. With Fe3+, Cr3+, and other ions, mordant azo dyes form insoluble complexes on the fiber which are well retained. The formation of dye-fiber chemical bonds is characteristic of the active azo dyes. These azo dyes, in production since 1952, not only afford beautiful tints but also are outstanding in their resistance to water and other processing agents. Ice colors are obtained directly on fabrics. Some azo dyes in a fine-dispersion state are used in polygraphy and the paint and varnish industry. Azo dyes are used mainly for coloring textiles but also for coloring leather, paper, rubber, and certain plastics.