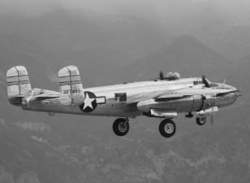 A B-25 like this one disappeared after the pilot ditched it over the Monongahela River near Pittsburgh in 1956. The military claimed it had nothing in it of importance, but conspiracists assert the cargo included an atomic bomb.

The B-25 bomber is said to have been hauling some very mysterious cargo when it ditched into the Monongahela River. If the bomber was only on a routine training flight as the air force claimed, why has the entire aircraft disappeared?

The B-25 Mitchell bomber was one of World War II’s most famous U.S. warplanes. On January 31, 1956, an aging B-25 ditched into the Monongahela River near Pittsburgh—and has never been seen again. Over the years, the “Ghost Bomber” has achieved legendary status in the area and spawned a number of conspiracy theories concerning its cargo. Depending on the theory, the B-25 was carrying an atom bomb, nerve gas, Las Vegas showgirls, or a fragment of the UFO crash at Roswell. Because of the bomber’s clandestine cargo, some theorists contend, a top-secret crew of black-ops specialists arrived, hoisted the plane to the surface, then cut it into pieces and shipped the parts down the river in barges.

According to official air force records, the B-25 was hauling absolutely nothing of interest. The sole purpose of the flight was to give the six-member crew some air time before the bomber was retired. The plane took off from Nellis Air Force Base in Nevada, landed at Tinker Air Force Base in Oklahoma, then continued to Selfridge Air Force Base in Michigan before flying to Olmstead Air Force Base in Harrisburg, Pennsylvania. As the craft flew over western Pennsylvania, the pilot, Major William Dotson, thirty-three, of San Antonio, saw that his fuel was too low to make Olmstead, so he decided to head for Allegheny County Airport in West Mifflin. Then, realizing that he could not make the Allegheny airport either, he chose to ditch the B-25 in the Monongahela between the Glenwood Bridge and the Homestead High Level Bridge.

Hundreds of witnesses viewed the crash from the vantage points of the bridges. Major Dotson, a seasoned pilot, veteran of air campaigns in World War II and Korea, told the Pittsburgh Post-Gazette two days after the crash that he chose the river because he didn’t want to hit anyone on the ground.

All flight personnel survived the initial impact of the crash. The pilot and five crew members managed to climb out onto the wings as the B-25 began to float downstream. One of the crew members apparently slipped off the wings, and witnesses counted only five men on the rapidly sinking aircraft. About a half mile from Becks Run, the plane sank, and another crew member was lost. The four surviving crewmen were rescued, and the bodies of the two who drowned were found a few weeks later.

The day after the crash a Coast Guard cutter snagged what searchers believed may have been one of the plane’s wings and dragged it to the surface. But the anchor slipped off and whatever it had nearly hauled to the surface sank. On a second try, the two-inch tow line snapped. On a third attempt, a smaller anchor was lost. Three days after the B-25 ditched into the Monongahela, an Army Corps of Engineers dredging barge swept the river 150 times and was unable to find any trace of the bomber. The Pittsburgh River Patrol and private vessels dragged the river repeatedly to find the plane. The water was high and running fast, making their efforts even more difficult. The Coast Guard tried once more, dragging the main channel with a specially made grappling hook, but located nothing. After fourteen days, according to official air force reports, the search for the B-25 was abandoned.

Air force spokespeople have commented that a common misperception in the popular mind is that a B-25 bomber is massive and that its wreckage should be easy to find. The B-25 is often confused with the B-17, the famous four-engine Flying Fortress. The B-25 has a wingspan of only 67 feet, compared with the B-17’s 103 feet 9 inches.

The mystery of the Ghost Bomber of the Monongahela has grown over the years along with the conspiracy theories of Nazi gold, atomic secrets, and treasures of the Illuminati that have been nominated as possible cargoes of the aircraft. In the 1990s a sonar survey located only cars, trees, and an ancient paddle-wheeler. An image that seemed to have potential as a B-25’s fuselage turned out to be a sunken barge.

Hundreds of witnesses saw the bomber crash into the river. Four of the six crew members were rescued. Is it possible that a World War II bomber could vanish almost immediately after it ditched? Or did the aircraft contain secrets so incredible that black ops scooped it up and hid it away?