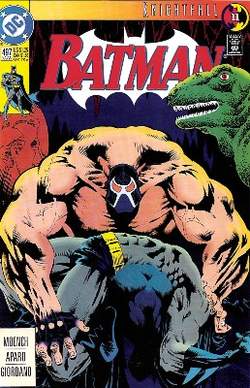 (pop culture)
Bane, a 350-pound behemoth who looks as if he stepped out of the Mexican wrestling arena, was first seen in Batman: Vengeance of Bane #1 (1993). His real name is unknown but his past is legend. Bane was raised behind bars in the rueful Pena Duro, serving a life sentence in subrogation for his insurrectionist father. Slaughtering an inmate at the “tender” age of eight, Bane matured into the prison's most feared felon and was roped into being a guinea pig for the strength-enhancing chemical Venom. In the serialized DC Comics storyline “Knightfall” (1993), Bane engineers a bloody jailbreak, migrates to Gotham City, and releases the supervillains of Arkham Asylum. Their crime rampage so fatigues their mutual foe Batman that when the Venom-propelled Bane goes one-on-one with the hero, he snaps Batman's spine in a brutal body slam, forcing the Dark Knight into recuperation. Batman's stand-in Azrael later humbled Bane, but the villain resurfaced to terrorize Gotham both alone and in an alliance with Ra's al Ghul. After discovering the identity of the father who abandoned him—the crimelord King Snake—Bane re-created himself in one of Ra's' regenerating Lazurus Pits, but Batman suspects his foe's new leaf may wilt. Bane has often tormented Batman in cartoons: Henry Silva voiced the villain in Batman: The Animated Series (1992–1995), followed by Hector Elizondo in the direct-to-video film Batman: Mystery of the Batwoman (2003) and Joaquim de Almeida in the animated TV series The Batman (2004–present). Real-life wrestler Jeep Swenson played the man-monster in director Joel Schumacher's Batman & Robin (1997), and Bane was featured in the 2003 video game Batman: Rise of Sin Tzu. Kenner and DC Direct have produced a number of Bane action figures in the 1990s and 2000s.
The Supervillain Book: The Evil Side of Comics and Hollywood © 2006 Visible Ink Press®. All rights reserved.

Feedback
Flashcards & Bookmarks ?
Please log in or register to use Flashcards and Bookmarks. You can also log in with
Flashcards ?
My bookmarks ?
+ Add current page to bookmarks
Mentioned in ?
References in periodicals archive ?
In his letter of resignation, addressed to Wise, County Manager Lloyd Kerr and Chairman Banes, Haynie said he felt his time serving the county had been rewarding.
Chairman resigns from Newton solid waste Authority; third resignation since April
Banes said that the portal will can be accessed anywhere from the Arab region and it is free of cost.
Assistive technology centre launches online library
A few of these subjects suggest the interests and aesthetics of Banes' husband and occasional coauthor, the philosopher of film Noel Carroll, and everything reflects Banes' own socialist inclinations.
Before, Between, and Beyond: Three Decades of Dance Writing
Much of what Bane observes with regard to biomechanics is quite valid.
The tactical reload
Obviously, she changed her mind, prompted partly by contemporary choreographers who introduced "issues of feminist identity in their dances" and partly by younger scholars who made feminist analysis "an issue for urgent debate." In Dancing Women Banes, perhaps the most prominent dance scholar of her generation, talks back to the younger generation, and in so doing she writes a book that marks the coming of age of feminist dance history.
Dancing Women: Female Bodies on Stage
The family refused to have his body autopsied and said they would not be going after his killers, Banes said.
17-year-old laborer killed while playing guitar
His essays are available in back issues of Contact Quarterly, to which he's a contributing editor, and his work has been discussed in a host of dance history books, notably Sally Banes' Terpsichore in Sneakers.
Contact improvisation comes of age
According to PO3 Donald Banes, case investigator from the Mandaluyong City police, the suspect entered the canteen and posed as a customer.
Hotel owner shot dead in Mandaluyong, probe underway
Among other awards presented was one to Sally Banes for Lifetime Achievement as dancer, performer, writer, and editor and to Sylvia Waters (above, celebrating) for her artistic direction of Ailey II.
And the awardees are ..
The two men believed to have burned down a 'Melvin' taxi left the driver Jonathan Banes unharmed and did not take his cellphone and earnings amounting to about P4,000.
Taxi of businessman tagged as drug lord burned down in Iloilo