satyr (sāˈtər, sătˈər), in Greek mythology, part bestial, part human creature of the forests and mountains. Satyrs were usually represented as being very hairy and having the tails and ears of a horse and often the horns and legs of a goat. An important part of Dionysus' entourage, they were lustful, fertile creatures, always merrily drinking and dancing. The satyr was similar in appearance to the silenus and Faunus.
The Columbia Electronic Encyclopedia™ Copyright © 2022, Columbia University Press. Licensed from Columbia University Press. All rights reserved. 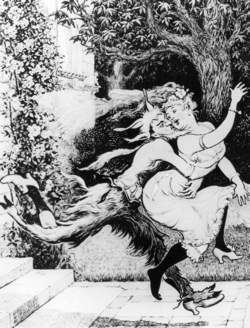 1. Greek myth one of a class of sylvan deities, represented as goatlike men who drank and danced in the train of Dionysus and chased the nymphs
2. a man who has satyriasis
3. any of various butterflies of the genus Satyrus and related genera, having dark wings often marked with eyespots: family Satyridae
Collins Discovery Encyclopedia, 1st edition © HarperCollins Publishers 2005