[′bak ‚hō]
(mechanical engineering)
An excavator fitted with a hinged arm to which is rigidly attached a bucket that is drawn toward the machine in operation. Also known as backacter; backdigger; dragshovel; pullshovel.
McGraw-Hill Dictionary of Scientific & Technical Terms, 6E, Copyright © 2003 by The McGraw-Hill Companies, Inc. 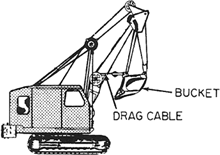 backhoe attachment on a crane
An excavating machine for cutting trenches; a boom-mounted bucket moves toward the machine, cutting the ground like a hoe; then the machine turns away from the cut to permit the operator to dump the soil.
McGraw-Hill Dictionary of Architecture and Construction. Copyright © 2003 by McGraw-Hill Companies, Inc.

Feedback
Flashcards & Bookmarks ?
Please log in or register to use Flashcards and Bookmarks. You can also log in with
Flashcards ?
My bookmarks ?
+ Add current page to bookmarks
Mentioned in ?
References in periodicals archive ?
The black T-shirt has a red silhouette of a backhoe and the words '58 dead, 5 years, 0 justice.
The backhoe
"Whatever their size, backhoes offer more versatility than compact track loaders, excavators and even skid steers in certain applications," says Bobcat's Rhayem.
Backhoe loaders: Gearing up for growth
By 1964, just 11 years after its first backhoe, JCB had already sold 3,000 of these distinctive units.
JCB celebrates 70th with limited edition backhoe
JCB Brazil managing director Carlos Hernandez said: "It is a great honour to have been chosen again to supply another 1,000 backhoes that will be used to improve the infrastructure and services of the smaller municipalities.
DIG IN BRAZIL; Boost for N.Wales plant as JCB nets huge South America deal
Fun to use and practical to own, the hydraulic backhoe provides you with back-saving methods to dig, move, remove, place and even lift.
Backhoe basics: add this versatile tool to your kit for more than digging power
The Queen's Award for Innovation has been handed to JCB in Wrexham for developing a product called TorqueLock which is fitted to the company's biggest selling product, the backhoe loader.
JCB staff dig innovation prize
The backhoe loader - a machine with a rear excavating arm and front shovel - was pioneered by JCB's founder Joseph Cyril Bamford in 1953.
JCB is flying the flag for British innovation
Bobcat was added to the list of suppliers in the compact utility tractor competition in mid-2007 and now has about six models available from its dealers nationwide, all with backhoes and loader buckets available.
Backhoe loaders--the good news and the bad
The E-Series features factory-installed hydraulic thumbs on the backhoe and--in a high-tech move--the option of a Caterpillar AccuGrade system.
Backhoes go high-tech
The use of quick couplers with loaders, which allow for the easy change-out of attachments, has become an increasingly popular trend as wheel loaders and loader backhoes are required to multi-task on the job, says LeBlanc.
Wheeling & dealing: wheel loaders and loader backhoes help contractors and recyclers get the job done
In the U.S., backhoe sales totaled 27,765 units in 1997, it said.
Komatsu to debut in U.S. in 1999 with loader-backhoes+