Bacon, Francis, 1561–1626, English philosopher, essayist, and statesman, b. London, educated at Trinity College, Cambridge, and at Gray's Inn. He was the son of Sir Nicholas Bacon, lord keeper to Queen Elizabeth I. Francis Bacon was a member of Parliament in 1584 and his opposition to Elizabeth's tax program retarded his political advancement; only the efforts of the earl of Essex led Elizabeth to accept him as an unofficial member of her Learned Council. At Essex's trial in 1601, Bacon, putting duty to the state above friendship, assumed an active part in the prosecution—a course for which many have condemned him. With the succession of James I, Bacon's fortunes improved. He was knighted in 1603, became attorney general in 1613, lord keeper in 1617, and lord chancellor in 1618; he was created Baron Verulam in 1618 and Viscount St. Albans in 1621. In 1621, accused of accepting bribes as lord chancellor, he pleaded guilty and was fined £40,000, banished from the court, disqualified from holding office, and sentenced to the Tower of London. The banishment, fine, and imprisonment were remitted. Nevertheless, his career as a public servant was ended. He spent the rest of his life writing in retirement.

Bacon belongs to both the worlds of philosophy and literature. He projected a large philosophical work, the Instauratio Magna, but completed only two parts, The Advancement of Learning (1605), later expanded in Latin as De Augmentis Scientiarum (1623), and the Novum Organum (1620). Bacon's contribution to philosophy was his application of the inductive method of modern science. He urged full investigation in all cases, avoiding theories based on insufficient data. However, he has been widely censured for being too mechanical, failing to carry his investigations to their logical ends, and not staying abreast of the scientific knowledge of his own day. In the 19th cent., Macaulay initiated a movement to restore Bacon's prestige as a scientist. Today his contributions are regarded with considerable respect. In The New Atlantis (1627) he describes a scientific utopia that found partial realization with the organization of the Royal Society in 1660. Noted for their style and their striking observations about life, his largely aphoristic Essays (1597–1625) are his best-known writings.

, English painter
Bacon, Francis, 1910–92, English painter, b. Dublin. A self-taught artist, Bacon rejected abstraction in painting to explore a repertoire of strange, fractured, and often bizarre figurative images, many replete with homosexual, sadomasochistic, and fetishistic undertones. He became the center of a storm of controversy with his breakthrough painting Three Studies for Figures at the Base of a Crucifixion (1944; Tate Gall., London), which portrayed carcasslike figures on crosses. He painted a series of variations on figural themes, e.g., Van Gogh Goes to Work, Velázquez's Innocent X. Often large in scale, Bacon's works, which frequently use photographs or printed materials as sources for their imagery, focus on shockingly grotesque and brutally satiric themes. From the 1950s—the era of his famously grim screaming popes—onward his images became increasingly distorted and abstract, sometimes merging human and animal forms. 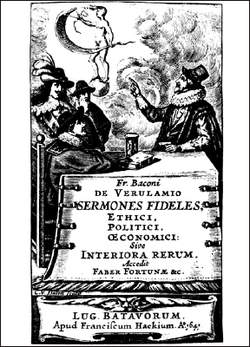 An image of Francis Bacon from the title page of his Sermones Fideles, 1621. Reproduced by permission of Fortean Picture Library.

Francis Bacon (1561–1626) was an English philosopher often regarded as the father (or one of the fathers) of modern science. He was famous for his advocacy of the empirical method. Perhaps because he perceived it as resting on an empirical base, he was an ardent champion of astrology.

In 1584, Bacon was elected to Parliament. In 1617 he became lord keeper of the press and later lord chancellor; he was created Baron Verulam and made Viscount St. Albans. In 1621 he was brought to trial on the charge of bribery, convicted, and relieved of all his duties. Though pardoned by the king, he did not return to government service and devoted the last years of his life to scientific and literary work.

Bacon’s philosophy took shape in the atmosphere of general scientific and cultural progress of the countries of Europe that had entered upon the path of capitalist development and of the liberation of science from the Scholastic fetters of clerical dogmatism. All his life, Bacon worked upon a large-scale plan for the Instauratio magna.

Science, according to Bacon, must give man power over nature, increase his might, and improve his life. From this point of view, he criticized Scholasticism and its syllogistic deductive method, which he contrasted to the appeal to experience and the refinement of its inductions by emphasizing the importance of experiments. In the words of Marx, for Bacon “science is an empirical science and consists of the application of rational method to sensory data” (K. Marx and F. Engels, Soch., 2nd ed., vol. 2, p. 142). In elaborating rules for the application of the inductive method which he proposed, Bacon compiled tables of the presence, absence, and degree of various properties in individual objects of a given class. The mass of facts compiled in this manner was to make up the third part of his Natural and Experimental History.

Bacon’s emphasis on the importance of method allowed him to propose a principle, which is very important in teaching, according to which the goal of education is not the accumulation of the greatest amount of knowledge possible but rather the ability to use methods in order to gain knowledge. Bacon divided all extant and possible knowledge in accordance with the three faculties of the human mind: history corresponds to memory; poetry corresponds to imagination; and philosophy, including the study of god, nature, and man, corresponds to reason.

Bacon believed that the reason for errors in reasoning was false ideas—“specters,” or “idols,” of four kinds: “specters of the tribe,” rooted in the very nature of the human race and caused by man’s attempt to view nature by analogy with himself; “specters of the cave,” which arise from the individual personal characteristics; “specters of the marketplace,” bred by an uncritical attitude to prevailing opinions and to incorrect usage of words; and “specters of the theater,” or false perception of reality based on blind faith in authority and traditional dogmatic systems similar to the deceptive verisimilitude of theatrical performances. Bacon regarded matter as the objective diversity of sensory qualities perceived by man; Bacon’s concept of matter had not yet become mechanistic as it did later with Galileo, Descartes, and Hobbes.

Bacon’s teaching exerted an enormous influence on the subsequent development of science and philosophy and made possible the formation of T. Hobbes’ materialism and the sensualism of J. Locke and his followers. Bacon’s logical method was the point of departure for the development of inductive logic, especially that of J. S. Mill. Bacon’s appeal to the experimental study of nature was a catalyst to natural science in the 17th century and played an important role in the creation of scientific organizations—for example, the Royal Society of London. Bacon’s classification of knowledge was adopted by the French enlighteners—the Encyclopedists.