bacterial leaching, selective extraction of chemical elements from multicomponent compounds by dissolving them through the action of microorganisms in an aqueous medium. Bacterial lixiviation makes it possible to extract valuable components such as copper and uranium (from ores, industrial wastes, and so on) or harmful admixtures such as arsenic (from ores of ferrous and non-ferrous metals). The process was first patented in the USA in 1958 for use in extracting copper and zinc.

Bacterial lixiviation can be used in various ways that do not require high pressures or temperatures. Thiobacteria are most widely used for this purpose: Thiobacillus ferrooxidans, which can oxidize sulfide minerals and ferrous oxide to ferric oxide (the so-called iron bacteria); and T. thiooxidans (the so-called sulfur bacteria). Thiobacteria are chemoautotrophs—that is, the sole source of energy for their vital activity is the processes of oxidation of ferrous oxide, sulfides of various metals, and elemental sulfur. This energy is expended on the assimilation of carbon dioxide released from the atmosphere or from ore. The resulting carbon is used to build the bacterial tissues. T. ferrooxidans oxidizes sulfide minerals to sulfates directly and indirectly (when the microorganisms oxidize ferrous sulfate to ferric sulfate, a powerful oxidizing agent and solvent of sulfides):

The most important factor in bacterial lixiviation is the rapid regeneration of ferric sulfate by thiobacteria (T. ferrooxidans), which sometimes accelerates the processes of oxidation and lixiviation. The optimum temperature for the growth of thiobacteria is 25°-35° C at pH of 2–4. Thiobacteria dissolve chalcopyrite 12 times faster than ordinary chemical methods, arsenopyrite and sphalerite 7 times faster, and covellite and bornite 18 times faster.

Bacterial lixiviation is used on a substantial industrial scale for group extraction of minerals (copper and uranium) from ores where they occur. For example, it is economically feasible to use bacterial lixiviation to extract copper from waste sulfide ores. This is done by aqueous solutions of Fe2(S04)3 in the presence of Al2(S04)3, FeS04, and T. ferrooxidans. The solution is supplied through hoses into holes drilled into the ore body (see Figure 1); the bacteria and ferric sulfate oxidize the copper sulfides according to the formula

In underground works the solution is transferred from the ore body to a cementation or other installation for the extraction of copper.

Research is under way in various countries on lixiviation by thiobacteria to extract many metals (Zn, Co, As, Mn, and others). Attempts are being made to find other bacterial species for use in extracting other minerals. For example, to dissolve and extract gold, it has been proposed that use be made of the heterotrophic bacteria Aeromonas, which have been isolated from ore waters of gold-bearing placers.

The simple apparatus required for bacterial lixiviation and the possibility of rapid reproduction of the bacteria, especially 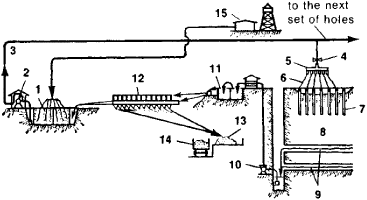 when spent solutions containing live organisms are returned to the process, provides the opportunity both for sharply reducing the cost of obtaining valuable minerals and for substantially increasing the sources of raw materials by using poor, low-value and lost (for example, in blocks of untouched ore) ores in deposits, tailings, dust, slag, and so on. Bacterial lixiviation will eventually make it possible to completely automate the processes for obtaining metals from low-value and lost ores directly from the earth, bypassing complex concentration systems.