phages, bacterial viruses that cause the disintegration (lysis) of bacteria and other microorganisms. Bacteriophages reproduce in cells, lyse them, and enter other—generally young—growing cells. Transmissible lysis of bacteria (anthrax bacilli) was first observed in 1898 by the Russian microbiologist N. F. Gamaleia. In 1915 the English scientist F. Twort described the same phenomenon in suppurative staphylococci. In 1917 the French scientist F. d’Hérelle called the lytic agent passing through bacterial filters a “bacteriophage.”

Structure and chemical composition. The particles of many bacteriophages consist of a round, hexagonal, or rod-shaped head 45–140 nanometers (nm) in diameter and a process 100–200 nm thick (see Figure 1). Other bacteriophages do not have a process; some are round, others threadlike, 8 x 800 nm in size. The head contains mostly deoxyribonucleic acid (DNA; the length of a strand greatly exceeds that of the head and attains 60–70 microns, and the strand is tightly coiled within the head) or ribonucleic acid (RNA) and a small amount (about 3 percent) of protein and some other substances. The process has the shape of a hollow tube surrounded by a sheath containing contractile proteins similar to muscular proteins. The sheath in some bacteriophages can contract, revealing part of the shaft. At the end of the process in many bacteriophages there is a basal plate with several spinelike or other projections. Long delicate strands proceed from the plate to help attach the phage to the bacteria (see Figure 1). The membranes of the head and process consist of proteins. The total amount of proteins is 50–60 percent of a phage particle; the nucleic acids account for 40–50 percent. Every bacteriophage has specific antigenic properties differing from the antigens of the host bacterium and other phages. There are antigens common to several phages (especially those containing RNA). 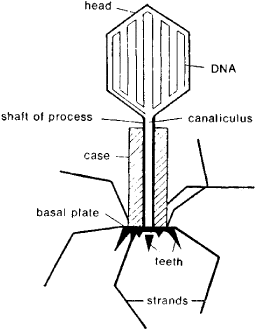 Figure 1. Diagram of the structure of a particle of the T2 bacteriophage of Bacillus coli

Occurrence. Bacteriophages exist for most bacteria, including pathogenic and saprophytic, and also for actinomycetes (actinophages) and blue-green algae. They are found in the intestines of man and animals, in plants, soil, bodies of water, sewage, manure, and so on. Bacteriophages of soil microorganisms influence the course of the microbiological processes at work in the soil (denitrification, ammonification, nitrogen fixation).

Reproduction. The bacteriophage attaches itself to a bacterial cell by its process and dissolves the cell wall by releasing an enzyme. The contents of the head then pass through the canaliculus of the process into the cell, where the phage’s nucleic acid halts the synthesis of bacterial proteins, DNA, and RNA; then the synthesis of phage nucleic acid and then of phage proteins begins. Some of these proteins are enzymes; others form the membrane of the mature phage particle. Smaller, spherical phages enter bacteria without the participation of the process. If a bacterial cell is infected simultaneously with phage particles differing from one another in a number of properties, then among the offspring—in addition to particles similar to the parents—there will be particles in which these properties occur in a new combination. This is due to the fact that phage reproduction is characterized by recombination—the exchange of fragments of strains of nucleic acid, which is the carrier of hereditary information. Particles of large phages destroy the bacteria in leaving them, whereas the particles of small and threadlike phages leave living bacteria. Some bacteriophages are highly specific and capable of lysing the cells of only one particular species of microorganism (monophages), and others can lyse the cells of various species (polyphages).

Bacteriophages are of two types: virulent bacteriophages cause the lysis of cells and formation of new particles; mild (symbiotic) bacteriophages are adsorbed by the cell and penetrate it but do not cause lysis—they remain in the cells in a latent, noninfectious form (prophage). Cultures containing latent phage are called lysogenic. Lysogenesis is transmitted to the offspring of bacteria. A lysogenic culture may contain two, three, or more phages; it is generally resistant to the phages present. (Only a few cells are lysed and liberate mature phages.) By exposing a lysogenic culture to ultraviolet or X rays, hydrogen peroxide, and some other substances, it is possible to increase substantially the number of cells liberating phages (so-called bacteriophage induction). Lysogenesis is widespread among all species of bacteria and actinomycetes. In a number of cases many properties of a lysogenic culture (toxicity, bacterial mobility, and so on) depend on the presence therein of certain prophages. Many mutations of bacteriophages have been described. These are associated with change in their lytic activity, structure of the particles and colonies, resistance to unfavorable factors, and other properties. Bacteriophages play a major role in microbial variability and evolution. There are various mechanisms by which they act on the cells. They can markedly alter the nitrogen-fixing ability of Azotobacter, the toxicity and antigenic properties of pathogenic bacteria, and so on.

Practical significance. Some phages (alone or combined with antibiotics) have been used to prevent (phagopro-phylaxis) and treat (phagotherapy) a number of bacterial infections of man (dysentery, typhoid, cholera, plague, staphylococcal and anaerobic infections, and others) and animals. However, antibiotics and other chemotherapeutic agents proved to be more efficacious than phages, and their use for therapeutic purposes has narrowed. Bacteriophages are successfully used to determine the species of bacteria and actinomycetes. They may harm the production of antibiotics, amino acids, milk products, bacterial fertilizers, and other aspects of microbiological synthesis. They are important in theoretical studies on genetics and molecular biology.

Feedback
Flashcards & Bookmarks ?
Please log in or register to use Flashcards and Bookmarks. You can also log in with
Flashcards ?
My bookmarks ?
+ Add current page to bookmarks
Mentioned in ?
References in periodicals archive ?
The course was funded through internal grants provided by (NYIT), which also supported our later work to further characterize the isolated bacteria and bacteriophages. This second phase of our work will be presented on a poster at ASM Microbe on Sunday, June 23rd.
Old Sponge as Solution to Antibiotic Resistance?
Bacteriophage storage at 4AdegC is the simplest and most cost-effective way, and there are several records of bacteriophages stored at 4AdegC maintaining their high titer even after 30 years (Ackermann et al., 2004; Weber-Dabrowska et al., 2016).
Short Communication - Storage of Bacteriophages at 4AdegC Leads to no Loss in Their Titer after One Year
Salmonella bacteriophages were isolated by the multiple enrichment method from clinical samples (fecal and rectal swabs) of cavies with signs of acute infection and organic waste from farms in the province of Lima.
Rapid detection of salmonellosis due to Salmonella enterica serovar Typhimurium in Peruvian commercially bred cavies, using indigenous wild bacteriophages
Jonathan Iredell, Senior Staff Infectious Diseases Physician at the Westmead Hospital in Sydney, director of Centre for Infectious Diseases and Microbiology at the Westmead Institute of Medical Research and Professor of Medicine and Microbiology at the University of Sydney, gave a presentation "Adjunctive bacteriophage therapy for severe Staphylococcal sepsis," including data on 13 patients suffering from severe S.
AmpliPhi Biosciences Presents Positive Clinical Data from its Expanded Access Programme for Serious S. Aureus Infections
A unique treatment known as phage therapy uses bacteriophages to selectively reduce harmful bacteria, making way for beneficial probiotic organisms to flourish.
Phages
To explore bacterial and bacteriophage community compositions associated with PD, the researchers used shotgun metagenomics sequencing data of fecal microbiome from 32 patients with PD and 28 controls.
A step towards understanding causes of Parkinson's disease
To investigate the prevalence of bacteriophages in municipal sewage water against the previously isolated bacteria, a spot technique was performed, and the results were summarized in Table 2.
Antibiotics and Phage Sensitivity as Interventions for Controlling Escherichia coli Isolated from Clinical Specimens
Ramirez figures he has collaborated with other students on the discovery of about 40 bacteriophages. It's a thrill, he said, to see a digital image of a previously undiscovered organism.
The Virus Hunters: Del Mar College Students Discover Organisms That Are New to Science
Several studies have demonstrated the efficacy of bacteriophages against foodborne pathogens; however, limited information is available on their general characteristics and physiology.
Isolation and Physiomorphological Characterization of Escherichia coli O157:H7-Infecting Bacteriophages Recovered from Beef Cattle Operations
By 1919, d'Herelle and his colleagues in Paris began using bacteriophages in a therapeutic way, launching the "phage therapy" [13, 14].
Bacteriophages and Their Immunological Applications against Infectious Threats
Bacteriophages specific to VREF were enriched with methods described by Stenholm et al.
Effectiveness of a Lytic Phage SRG1 against Vancomycin-Resistant Enterococcus faecalis in Compost and Soil
Scientists know that these viruses hijack a bacterium's DNA-reading machinery and use it to create many new bacteriophages. These then start demolishing the bacterium's cell wall.
Fighting bacteria with viruses