[′bal·ənst ¦meth·əd]
(engineering)
Method of measurement in which the reading is taken at zero; it may be a visual or audible reading, and in the latter case the null is the no-sound setting.
McGraw-Hill Dictionary of Scientific & Technical Terms, 6E, Copyright © 2003 by The McGraw-Hill Companies, Inc.
The following article is from The Great Soviet Encyclopedia (1979). It might be outdated or ideologically biased.

a measurement method based on compensation (balancing) of the voltage or electromotive force (emf) being measured by a voltage or emf produced across a known resistance by a current from an auxiliary source. The balanced method is used in measurements not only of electrical values (such as emf, voltage, current, or resistance) but also of other physical quantities (mechanical, light, and temperature), which are usually converted to electrical quantities before making measurements.

The balanced method is a version of the method of comparison with a standard. In this method the effect of the action of the quantities on the instrument is set to zero (an attempt is made to obtain a zero reading of the measuring instrument). The balanced method is distinguished by high accuracy; the accuracy depends on the sensitivity of the null instrument (null indicator), which controls the compensation, and on the precision of determination of the quantity necessary to compensate the quantity being measured.

The balanced method in a DC circuit functions as follows. The voltage Ux being measured (see Figure 1) is compensated by a voltage drop produced across a known resistor r by the current from an auxiliary source Uaux (the operating current Iop). The galvanometer G (the null instrument) is connected to the circuit of the voltages being compared by throwing a switch S to the right-hand position. When the voltages are compensated, no current flows through the galvanometer, and hence no current flow occurs in the circuit of the voltage Ux being measured. This is an important advantage of the balanced method as compared to other methods, since it is possible to measure the total emf value of the source Ux; in addition, the results of measurements made by the method are not affected by the resistance of connecting wires and the galvanometer. The operating current is established by means of a standard cell EN of known emf, compensating this emf by the voltage drop across the resistor R (the switch S is now in its left-hand position). The value of the voltage Ux is determined by the formula Ux = EN · r/R, where r is the resistor across which the voltage drop is compensated by Ux. 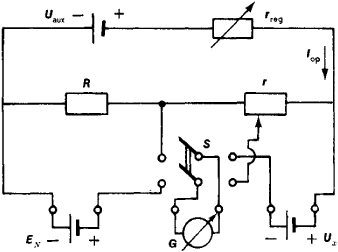 Feedback
Flashcards & Bookmarks ?
Please log in or register to use Flashcards and Bookmarks. You can also log in with
Flashcards ?
My bookmarks ?
+ Add current page to bookmarks
Mentioned in ?
References in periodicals archive ?
Establishing a fair and balanced method of reaching consensus and assuring corporate privacy make it possible for both large and small enterprises to participate.
GOVERNANCE FOR BLOCKCHAIN; Troy Norcross, Co-Founder Blockchain Rookies
* Ensure that the state uses a fair and balanced method to evaluate proposed energy projects that allows for the development of needed infrastructure while providing for public participation
Is NH 'closed for business'? Process for siting energy facilities in the state is cumbersome, inefficient
For the water balanced method, parameter [omega] was determined by previous studies [29] and there was uncertainty in the parameter.
Identification of the Impacts of Climate Changes and Human Activities on Runoff in the Jinsha River Basin, China
In (Tao Shu, Marwan Krunz and SarmaVrudhula, 2005) introduced power balanced method instead of load balanced method.
Improved energy efficient method for WSN to prevent far-zone
The mean square stability of the balanced method for SDEs and SDEs with jumps was studied in [13, 14], respectively.
T-stability of the Heun method and balanced method for solving stochastic differential delay equations
Hu and Gan [22,25] proposed the balanced method for SDEJs (1) and stochastic pantograph equations with jumps, respectively, and proved that the numerical solution converges to the analytical solution with rate 1/2.
Implicit numerical solutions for solving stochastic differential equations with jumps
During the audience, HRH Premier lauded the prestigious position reached by the GCC press at the Arab and international arenas, which reflects the progress and development of their countries, praising its moderate and balanced method in tackling and defending GCC and Arab issues and refuting fallacious information and defamatory campaigns against the region's peoples and governments.
HRH Premier Receives GPA Chairman and Members
The researchers concluded that because students ideally need to develop both content knowledge and transferable reasoning skills, teachers needed to develop a more balanced method of education.
Comparing the United States and Chinese performance in science reasoning
This study suggested that the full-sample unbalanced method not only produced SE(PAC)s of schools, school districts, and the whole state similar to those from Yens balanced method, but it also resulted in less variation of SE(PAC) estimates.
Accuracy of the Generalizability-Model Standard Errors for the Percents of Examinees Reaching Standards
While that has always been the cruel nature of the game, there is an undercurrent of support growing for a more balanced method to provide teams with more championship games.
DOOLEY IS OFFALY KEEN TO CLEAR THIS HURDLE; It's win or bust for smokin' Joe
Cell-based processing's granularity enables finer protocol prioritization, a more balanced method for mixing protocols, and efficient bandwidth sharing.
Rio-to-Manila-to-Jakarta
The progressive regulatory and policy framework within the UK has been a significant contributing factor to the growth of its FinTech space, while investors have been encouraged by their balanced method and recognise the potential this brings for rapid adoption and scaling of new approaches.
FinTech needs YOU - Solving the UK talent gap; FinTech thrives where capital, tech and talent connect with regulators and government. The UK's regulatory and policy framework have significantly contributed to its growth